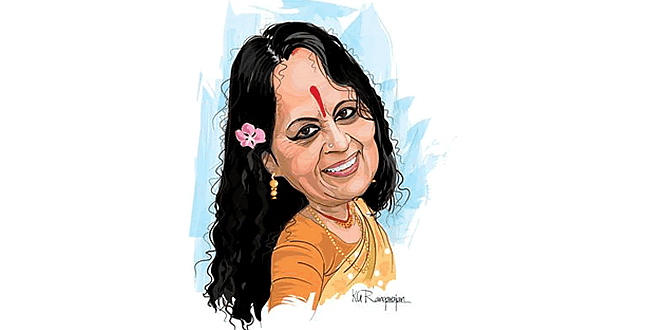 Sonal Mansingh, is one of the leading exponent of Odissi, an ancient classical dance form of Orissa. She has been called a philosopher among dancers for her opinions and interpretations. Apart from a dancer, she is a known social activist, thinker, researcher, orator, choreographer and teacher.

Sonal has had training in Bharatnatyam, Chaau dance and Indian music. She has been on stage since 1964. In 1977, she founded the Centre for Indian Classical Dances (CICD) in Delhi which has churned out many talented artists. Her renowned choreographic works based on Indian Mythology as well as contemporary issues include ‘Indradhanush’, Manavatta’, ‘sabras’, ‘Devi Durga’, ‘Aatmayan’, ‘Mera Bharat’, ‘Draupati’ etc. She has traveled widely and given performances all over India and abroad.

In her opinion dance is a part of the environment and dance forms should reflect issues of the society and she firmly believes that art forms has the power to bring even countries closer. Some of her choreographic works reflects issues concerning women and environment. She participates actively in environment related seminars and conduct lectures sharing her perceptions.

Sonal Mansingh took to dance at a time when it still had not gained respectability as a profession. According to her, prejudices still exist. Even though a dancer was called names like ‘nautch girl’, she did not pay heed to such snide remarks. She grew up in a family, which emphasized through their living, the values of the free Indian spirit.

Her mother Poornima Pakvasa was very artistic minded and her unconventional grandfather Mangaldas Pakvasa, a freedom fighter, believed in the equality of women. He was one of the first five Indian governors and from a very young age, state guests like Ravi Shankar Shukla, O P Mishra, Uday Shankar and M S Subbalakshmi frequented her home. He instilled in her, timeless values that she still cherishes today and encouraged her artistic talents, which she wanted to use to serve the cause of culture with dignity through dance.

Sonal learnt Bharatanatyam from Prof. U S Krishna Rao and Chandrabhaga Devi at Bangalore besides taking lessons from other gurus and teachers belonging to the Pandanallur school. She performed her arangetram at Mumbai where her grandfather was Governor and took to dance professionally from 1962 onwards.

When prominent artistes recognized her talents, her family realized how serious she was about her dance and Sonal took further training from Jayalakshmi Alva in Mumbai.

At an art festival, she met her first husband Lalit Mansingh, whose family was based in Orissa. His father Dr. Mayadhar Mansingh was a great educationist who took Sonal to Odissi guru Kelucharan Mohapatra in Cuttack and thus started her training in Odissi from 1965. Lalit Mansingh was posted in Geneva and after 2 years, she returned to Delhi to pursue her art. As the gap between them widened, they agreed mutually to part ways.

Her training in Odissi took place when Odissi was being reconstructed and her guru taught her most of the numbers, now in the Odissi repertoire, to her. She extended the horizons of this form; studying various strands of Oriyan culture and allied performing arts traditions like Chhau from Guru Anant Charansai and Pala Sangeet. She furthered her education under the late Shri Jiwan Pani. Sonal has also received training in Hindustani classical vocal music from Prof. K. G. Ginge, Bombay and Carnatic classical vocal music from Sri Venkataraman, New Delhi. She has undergone special training in Abhinaya from Late Mylapore Gouriammal and special training in Kuchipudi under Guru Vempati Chinna Satyam in the late 60’s at Madras.

As someone who is proficient in Sanskrit (she has Degrees “Praveen” and “Kovid” in Sanskrit from Bharatiya Vidya Bhavan) and German (She has a B.A. (Hon) in German Literature from Elphinstone College, Bombay), Sonal firmly believes that dancers must have love for literature, poetry, languages, sculpture, painting et al. Dance, as she puts it, is after all, “a rare confluence of all these arts.”

Sonal Mansingh has been on stage since 1961. Her role as a social activist, thinker, researcher, orator, choreographer and teacher combines admirably with her dancing. In 1977 she founded the Delhi based Centre for Indian Classical Dances (CICD) which has produced scores of stage productions and trained many students, some of whom have earned critical acclaim already.

Jiwan Pani, one of the leading poets and lyricists in Oriya and a distinguished scholar of Indian aesthetics and performing arts, had been associated from the beginning with the institution, acting as a guide to Sonal Mansingh in all her dance presentations from 1974 onwards. With his help, she was able to build up a completely authentic and new repertoire of Odissi dance. It was he, who introduced Sonal to the various living art traditions of Orissa like Paala, Chhau, Sabda – Swara – Paatha and Prahlad Natak.

At the peak of her career, she was involved in a serious car accident in 1975 and when the doctors told her she could not dance any more, she did not let that deter her. Her indomitable will brought her to her feet again and with a determined comeback, she continued to set about her goal in using her art as an instrument of social change.

At a time, she has only 12 students who are with her the whole day. She takes them to concerts and generally takes care of them. She believes firmly that music and dance must necessarily be part of the school curriculum. She also believes that teachers themselves need to re-orient their art as it involves a continuous process of renewal.

In the 80’s the Government of India granted the Centre approximately half an acre of prime institutional land in the elegant heart of New Delhi. The construction has started with the rear block in March 2001.

A leading exponent of Odissi, the ancient and traditional dance style of Orissa and with a background of decades of training in Bharatanatyam, Chhau (martial dance from Orissa) and Indian music, she has made many original choreographies based on Indian mythology as well as contemporary issues. Her work has embraced both form and content. Lately her work has veered more and more towards issues concerning women, environment, prison reforms and re-interpretation of ancient myths. Through seminars, round table discussions, writings, teachings, workshops and lectures, she shares her perception and concerns.

Sonal Mansingh’s choreographic forays in both solo and group format have ranged in style from typical dance items for the Bharatanatyam and Odissi repertoire, looking with an individualistic vision on ancient scriptures such as Draupadi, Kalidasa’s poetry, the Puranas as well as writings in various Indian languages. In a unique experiment, she alternatively danced technical portions of Odissi and Bharatanatyam in the same item. This innovative performer has never failed to reinvent herself – supple and subtle movements have given depth and meaning to her themes.