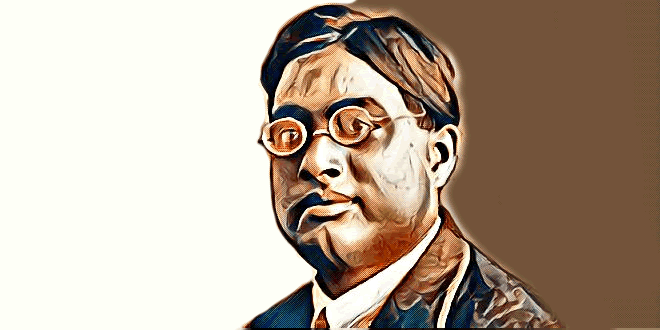 Satyendra Nath Bose — When that great educationist, Asutosh Mookerjee, founded the University Collage of Science in Calcutta, it did not have even a proper library. So, when in 1916 two brilliant young men joined the collage as lectures, with ambitions of doing research in physics and mathematics, they were greatly disappointed.

Those were the days when a revolution was taking place in physics. What we today call “modern physics” was emerging. The German physicist, Max Planck, had propounded the quantum theory, that energy is released only in extremely small packets. And Albert Einstein had propounded his theory of relativity. Besides, big strides were being made in understanding the interior of the atom. Although other lectures were satisfied with teaching the “old” physics, the two young men were eager to know the advances made in modern physics.

That was hard. With World War I still on, the latest books and journals were not reaching the country. In desperation the two began to hunt for books. Visits to nearby schools and collages proved futile, but their efforts eventually paid. A German scientist, P. J. Bruhl, who was staying in the country, had some books and papers on modern physics. But they were in German.

The two scientists were, however, persistent in their guest for knowledge. They learnt German. And it was not long before students and teachers found them discussing and debating between themselves the new findings in modern physics. What was even more wonderful was that they began to teach relativity to their students, till then not attempted elsewhere. In 1920, they translated Einstein’s papers on relativity from German into English, the first physicists to do so.

The two young men were none other than Satyendra Nath Bose and Meghnad Saha. For sometime they did research together. Then Saha went abroad and Bose moved to Dacca University.

This was a turning point in Bose’s life. One of his friends, who had just returned from abroad, presented him with a copy of Max Planck’s famous Thermodynamik und Warmestrahlung (Thermodynamics and Heat). The book contained all the original papers of the great physicist. As Bose read it he solved the equations and formulae himself.

At one place, however, he was stuck. Planck had assumed some hypothesis and calculated an equation approximately. “Never accept an idea as long as you yourself are not satisfied”, was Bose’s motto. He, therefore, began to work out a better way and, in the process, created a landmark in the development of theoretical or mathematical physics. He was then hardly 30.

Bose sent his four-page research paper, Planck’s Law and Light Quantum Hypothesis to an Indian journal and subsequently to several abroad. All of them rejected it. After all, who could have dreamt that an Indian working in a then obscure university could produce a revolutionary work?

In desperation, in 1924 Bose sent his paper to Albert Einstein. Bose had put forward a daring concept in the paper, which impressed Einstein so much that he himself translated the paper into German and got it published in a German journal, Zeitschrift fuer Physik. He also added his comment: “An important forward step”.

Bose was born on January 1, 1894. That he would one day become a great mathematician like Pierre Simon Laplace and Augustin Louis Cauchy was not doubted even when he was in school. His skill at solving questions used to impress his teachers so much that they used to award him 110 marks out of 100! In fact, they were always afraid of his tricky questions.

But, international recognition eluded him. It was late in life, 34 years after his significant discovery, that he was elected Fellow of the Royal Society. In fact, on several occasions, he had to take testimonials from famous physicists like Albert Einstein to convince the authorities of the worth of his work.

Unlike many scientists, Bose was gregarious. He would chat for hours with friends and students and could talk on almost any subject-from the price of fish to the latest problems in physics. He realized the importance of bringing science to the masses and urged scientists to write in their mother tongue. He founded an association and a popular science magazine in Bengali.

Bose is also renowned for his experimental work in such branches of physics as X-ray crystallography and thermoluminescence. He produced a new chemical compound which is even today used as an eye-drop.

At an international seminar held in Calcutta to mark the golden jubilee of his discovery of “Bose statistics”, Bose said that he had no desire to live any longer as his work was being recognized the world over. Only a month later, on February 4, 1974, he died, leaving a half-finished problem relating to the theory of numbers on his table.