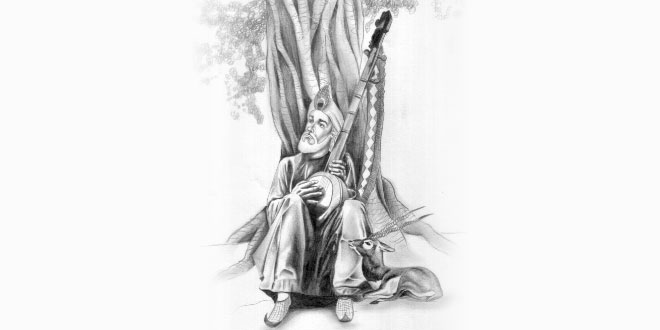 Sant Kabir, is considered to be one of the greatest poets as well as mystics ever born in India. He believed that human beings are equal and being one with God is the ultimate aim of every individual. His love and devotion towards the Supreme One clearly reflects in his poetry. The Holy Guru Granth Sahib contains over 500 verses by the great saint, Kabir. The verses or dohas of Guru Kabir are still read by people with awe and admiration. Read on to explore the biography of Sant Kabir further. As per the life history of Saint Kabir, he was born in 1398 AD. It is said that he was found floating on a lotus leaf in a tank in Benaras by a Muslim weaver. The weaver took the vulnerable child under his care and following the traditional manner, gave him the name of ‘Kabir’, meaning ‘the great one’. Even at a young age, Kabir displayed enormous spiritual talent.

Kabir always wanted to become a disciple of Ramanand. However, since he was a Muslim, it was next to impossible for him to get initiation from a Hindu. So, he took recourse to a trick. Ramanand daily went to the bathing ghat for his pre-dawn ritual ablutions. Kabir lay on the steps of the ghat in such a way that Ramanand stepped on him. Shocked at this incident, he chanted ‘Rama! Rama!’. Kabir said that since he had received teachings from him, in the form of the words ‘Rama! Rama!’, he was Ramanand’s disciple. Impressed with the intelligence of Kabir, Ramanand took him as his disciple.

The hallmark of Kabir’s works consists of his two line couplets, known as the ‘Kabir ke Dohe‘. The Dohas reflect the deep philosophical thinking of the poet saint.

The Philosophy of Sant Kabir

Sant Kabir believed in the Vedantic concepts of atman. He always advocated the Impersonal Aspect of God (Nirguna) and therefore, was against idol worship. As per his view, all human beings are equal and the societal caste system that is so widely prevalent in our country is fallacious. He said that true guru is the one who can be attained through direct experience. The common ways of realizing God, like chanting, austerities, etc, are worthless.