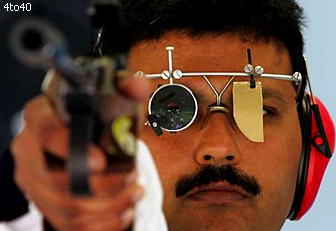 Samresh Jung (born 5 May 1970) is an Indian sport shooter. He is an air pistol specialist. At the 2002 Commonwealth Games in Manchester, he won two Gold medals, in the men’s free pistol pairs and in the open event of 25 m standard pistol pairs, both in partnership with Jaspal Rana. He contested in the 10 m air pistol and 50 m pistol events at the 2008 Summer Olympics in Beijing, but failed to reach the finals in both events.

He received the Arjuna Award in 2002. He is employed with the CISF and lives in New Delhi.

On 3 October 2010, he had the honour of bearing the Queen’s Baton in its Opening Ceremony run in the stadium for the 2010 Commonwealth Games of Delhi.

In the present times, shooting is looked upon more as an activity or game. Talking about the famous Indian shooters of the present era, Samresh Jung is one name that comes to mind. Shooting was infused in the blood of this exemplary player, who hails from a family with a long lineage of successful shooters. One of the finest Indian pistol shooters, Jung is a top-notch marksman, who has carved out a niche for himself in the arena of shooting. An eminent sports personality, Jung holds his magnum opus in the category of air pistol. To get detailed information about the early life and career of this outstanding shooter, read through the following lines.

Samresh Jung was born on May 5, 1970, in Haripur Khol. A sleepy village, it is 175 km from Sirmaur district in the Shiwalik foothills. Son of a retired colonel of the Indian Army, Jung learnt the art of shooting from his grandfather, Sher Jung, who was a freedom fighter, besides being an ace shooter. Jung completed his preliminary education from the Modern School in Delhi. Thereafter, he enrolled himself at the Osmania University in Hyderabad, from where he gained his graduation degree.

An Inspector at the Central Industrial Security Force, Jung first made his mark in the world shooting forum, when he clinched two Gold, one Silver and one Bronze medal in the second South Asian Federation Shooting Championship in Delhi, 1997. A specialist in air pistol, Jung strengthened his position at the 2002 Manchester Commonwealth Games, after winning two Gold medals, in the Men’s free pistol pairs and in the Open event of 25m standard pistol pairs, both in partnership with Jaspal Rana.

After a string of impressive outings in international events, Jung’s big moment arrived with the 2006 Commonwealth Games, where he was in contention for eight medals. Starting off with a Silver, Samresh Jung went on a Gold medal-winning spree that saw him coming on top in 50m free pistol, 10m air pistol (individual & pairs), 25m centre fire pistol (pairs) and 25m standard pistol (pairs) events. However, setbacks in the individual events of 25m centre fire pistol and the 25m standard pistol paid rest to Samresh’s hopes of emulating the feats of Ian Thorpe and Susie O’Neill (swimmers), who had won six Gold medals each in the earlier games. He contested in the 10 m air pistol and 50 m pistol events at the 2008 Summer Olympics in Beijing, but failed to reach the finals in both events.