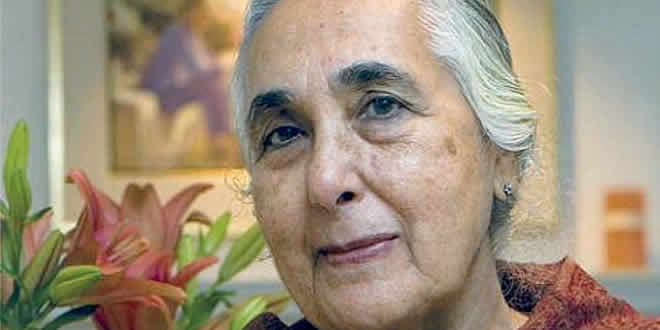 Romila Thapar (born 1931) is an Indian historian whose principal area of study is ancient India.

After graduating from Panjab University, Thapar earned her doctorate under A. L. Basham at the School of Oriental and African Studies, the University of London in 1958. Later she worked as Professor of Ancient Indian History at the Jawaharlal Nehru University, New Delhi, where she is Professor Emerita.

Thapar’s major works are Asoka and the Decline of the Mauryas, Ancient Indian Social History: Some Interpretations, Recent Perspectives of Early Indian History (editor), A History of India Volume One, and Early India: From the Origins to AD 1300.

Her historical work portrays the origins of Hinduism as an evolving interplay between social forces. Her recent work on Somnath examines the evolution of the historiographies about the legendary Gujarat temple.

In her first work, Asoka and the Decline of the Maurya published in 1963, Thapar situates Ashoka’s policy of dhamma in its social and political context, as a non-sectarian civic ethic intended to hold together an empire of diverse ethnicity and cultures. She attributes the decline of the Mauryan empire to its highly centralized administration which called for rulers of exceptional abilities to function well.

Thapar’s first volume of A History of India is written for a popular audience and encompasses the period from its early history to the arrival of Europeans in the sixteenth century.

Ancient Indian Social History deals with the period from early times to the end of the first millennium, includes a comparative study of Hindu and Buddhist socio-religious systems, and examines the role of Buddhism in social protest and social mobility in the caste system. From Lineage to State analyses the formation of states in the middle Ganga valley in the first millennium BC, tracing the process to a change, driven by the use of iron and plough agriculture, from a pastoral and mobile lineage-based society to one of settled peasant holdings, accumulation and increased urbanization.