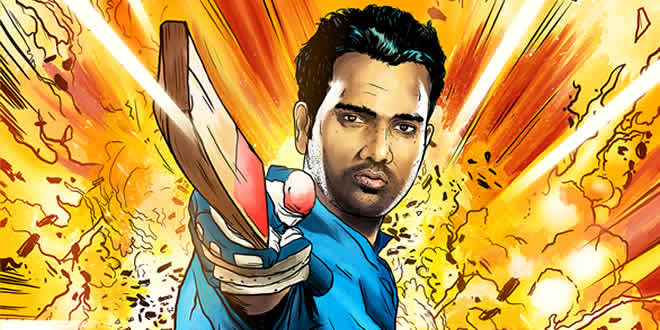 Rohit Sharma is an Indian cricketer, born on 30th April 1987 in Bansod, Nagpur. Rohit is primarily a right-handed batsman, who generally opens the innings for his side but has batted in the middle order as well. He also bowls right-arm off-break occasionally.

Rohit holds the record of scoring the most runs in a single innings in ODI cricket when he scored 264 against Sri Lanka at the Eden Gardens in 2014.

Sharma first came to the notice of everyone during the 2006 ICC U19 World Cup. He scored 205 runs in the tournament at an average of 41. He hit a delightful 78 in the group stage match against Sri Lanka which earned him the Man of the Match award.

Playing for West Zone, Sharma made his List A debut in a match against Central Zone at Gwalior in 2006. He made an unbeaten 142 against North Zone in the same tournament.

Rohit made his Ranji Trophy debut in the 2006-07 season for Mumbai. He made 205 against Gujarat at Mumbai, a score the opposition failed to make in both their innings. In the final against Bengal, Rohit made an important 57 in the second innings and helped his side to victory.

Sharma was selected in the India team for the first time in India’s tour to Ireland in 2007. He made his debut at Belfast but did not get to bat. He was retained in the next game against South Africa and made only eight runs.

He made his T20I debut against England at Durban during the 2007 ICC World T20 but again did not get to bat. He was included at the last minute in the game against South Africa as Yuvraj Singh was injured and made the opportunity count with an unbeaten 50. He was named Man of the Match.

Sharma made his Test debut against West Indies at Kolkata in 2013. He made 177 runs, which remains his career best till date. He followed it with 111* in the next match at Mumbai.

After an inconsistent start to his international career, Rohit’s first knock of substance was the 66 he made during the first final of the 2008 Commonwealth Bank Series against Australia. He stitched a 123-run partnership with Sachin Tendulkar to win the game for India.

Rohit decided to open the innings for India during the ODI series at home against England in 2013. By then, he had a poor batting average for India and did not have a fixed spot in the lineup. He responded with a match-winning 83 at Mohali and continued to open the innings during the 2013 ICC Champions Trophy. He scored 65 and 52 against South Africa and West Indies respectively.

Rohit’s match winning capabilities came to the fore in the Jaipur ODI against Australia in 2013. He scored 141* to steer India to victory while chasing a target of 360. He made 209 runs in the last ODI of the series at Bengaluru and helped India clinch the series 3-2.

In 2014, Rohit made history when he made 264 in an ODI against Sri Lanka at Kolkata. He hit 33 boundaries during the knock, which was a record at that time.

In 2015, Sharma made 106 in the first T20I against South Africa at Dharamshala. With that knock, Sharma became the second Indian to hit a hundred in all formats of the game.

On 13th December 2017, Sharma scored his third double hundred of ODI cricket when he hit an unbeaten 208 against Sri Lanka at Mohali.

Sharma had a very inconsistent start to his international career. Critics pointed out that he played too many shots to the same delivery and often got dismissed playing the wrong shot.

He averaged only 22 and his failure to cement his spot meant he lost out on a place in the 2011 ICC Cricket World Cup squad.

Rohit Sharma started his Indian Premier League (IPL) career with the Deccan Chargers. He was one of the leading run scorers in the inaugural edition of the tournament in 2008 with 404 runs.

In 2011, Sharma was sold to the Mumbai Indians for $2 million. He scored his first IPL century against Kolkata Knight Riders at Kolkata in 2012, scoring 109* in 60 balls. He was retained by the franchise for the 2018 edition of the tournament.