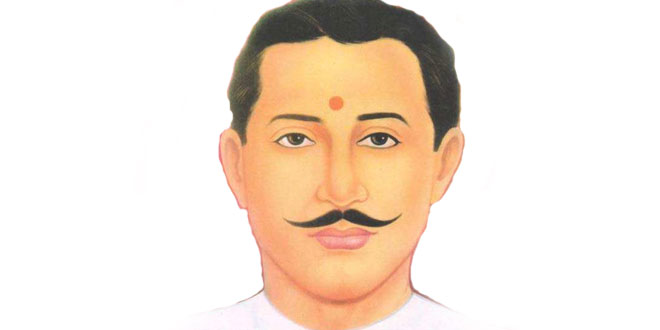 Ram Prasad Bismil was the famous freedom fighter who was involved in the historic Kakori train robbery. He was born in 1897 at Shahjahanpur, Uttar Pradesh. His father Muralidhar was an employee of Shahjahanpur Municipality. Rama Prasad learnt Hindi from his father and was sent to learn Urdu from Moulvi. He wanted to join an English medium school and got admission in one of such schools despite his father’s disapproval.

Rama Prasad joined Arya Samaj. He was also very talented in writing poetry. All of his poems have the intense patriotic feeling. He always wanted to see India as a free nation and dedicated himself to the cause of the country. His team members consisted of great freedom fighters like Ashfaqulla Khan, Chandrasekhar Azad, Bhagawati Charan, Rajguru and many more. Ram Prasad used to take advice related to religion and politics from great patriot and scholar Swami Somadevji.

The practice of Brahmacharya inspired him a lot and he became an ardent follower of it. He got himself engaged in the volunteering of Shahjahanpur Seva Samithi. In order to get people’s attention, he published a pamphlet named ‘A Message to My Countrymen’. Ram Prasad made many Hindi translations of Bengali writings. Some of his works include:

Yogic Sadhana of Rishi Aurobindo was translated by Ramaprasad. All of his works were published in the series called ‘Sushil Mala’. He wrote his autobiography while he was in the cell.

On 9th August, 1925, Ram Prasad Bismil along with his fellow followers looted the money of the British government from the train while it was passing through Kakori, Lucknow. Except Chandra Shekhar Azad, all other members of the group were arrested. Ram Prasad Bismil along with others were given capital punishment. This great freedom fighter of India was executed on 19th December, 1927.