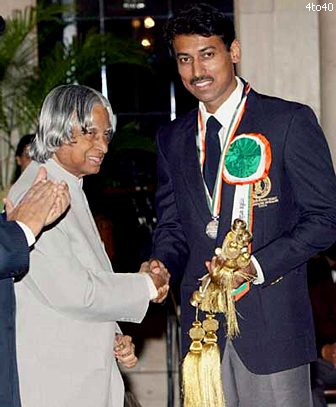 Rajyavardhan Singh Rathore — Colonel Rajyavardhan Singh Rathore is an Indian shooter and politician, who rose to fame after winning the Silver Medal in Men’s Double Trap at the 2004 Summer Olympics in Athens. He is the first sportsperson to win an individual Silver for India since Norman Pritchard, who won two Silver Medals at the 1900 Paris Olympics. Rathore hails from Jaisalmer, Rajasthan.

Rathore graduated from the National Defence Academy, and since served in the Indian Army where he retired as a Colonel in 2013, before joining politics. He is a member of the Bharatiya Janata Party. He won his first Lok Sabha election in 2014 and is currently the Minister of State for Ministry of Information and Broadcasting (India) (reporting to Arun Jaitley ) under the Narendra Modi government.

Rajyavardhan Singh Rathore has been the poster boy of Indian shooting ever since he won the first individual Olympic silver medal for India, in the 2004 Athens Games. Rathore brought the entire nation to its feet with that awe-inspiring performance, in Men’s Double Trap event. The event has already become a part of Indian sporting folklore for the sheer delight it brought to this humongous nation of one billion people. Though endowed with various awards, honors and recognition, Rathore has successfully come over the adulation and carried on with his good performance at the international level. Rathore is one of the most promising shooters in the Indian shooting fraternity and has surely a long way to go. In the following lines, we have provided detailed information about the life and career of Lt. Col Rajyavardhan Singh Rathore.

Rajyavardhan Singh Rathore was born on January 29, 1970 in Jaisalmer, Rajasthan, in an army background. While his father, Laxman Singh Rathore, is a Col. in the Indian Army and his mother, Manju Rathore, is a teacher. Though nicknamed ‘Chilly’ at home, according to his parents, Rathore is a soft-spoken and down to earth person. Right from childhood, he had a knack for shooting and thus, refined his skills to make a name in the field of the shooting. Apart from shooting, cricket was also one of the fortes for this ace sportsperson.

Rathore was such an able cricket player that he was about to be selected in the Madhya Pradesh state cricket team for the famous Ranji Trophy in India. However, since he was only in class 10 at that time, his mother discouraged him to go in the team, as she wanted him to complete his preliminary education. Eventually, Rathore was not selected for the team. He, then, appeared in the National Defense Academy examination and cracked the test. Subsequently, as army personnel, Rathore continued to show his talent in the Indian Army as well.

During Rathore’s term as a Major of the Indian Army, he was conferred with the ‘sword of Honor’ from Indian Military Academy in 1990. It was only in the year 1998 that Rathore seriously took up shooting. However, in the following year, as the Kargil war broke out, his professional commitments took him away from his hobby. As Indian army personnel, Rathore fought bravely against the separatist militants in Indian-administered Kashmir.

After winning the bronze medal at the World Championship in Cyprus, Rathore got a chance to compete in the Olympics in 2004. For the event, he took training from the Atlanta Olympic gold medalist Russel Mark of Australia, in Europe. Rathore won the gold in the individual and team events in Men’s double trap at the 2005 Asian Clay Shooting Championships at Bangkok. With this, he also completed a hat trick at the annual events, as he was the champion in 2003 and 2004 as well. In 2005 Commonwealth Shooting Championships in Melbourne, Rajyawardhan Rathore was the member of the winning Indian team in the double trap event.