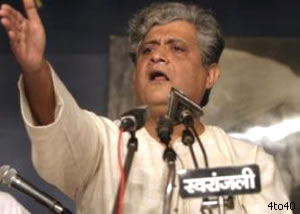 Pt. Satyasheel Deshpande — Born in Mumbai, in 1951, Satyasheel Deshpande is one of the foremost Hindustani vocalists of his generation. A naturally gifted and instinctively creative artist by temperament, Satyasheelji is as much an individualist as he is a thorough explorer of the tradition within which he works. His music emerges not only from his own virtuosity and versatility as a performer, but also from his rigorously intellectual and assiduous eclecticism as a student of the Hindustani tradition. He is widely known for the stunning spontaneous imagination he demonstrates in performance, for his innate sense of composition and improvisation, and for the immense scope and depth of his musicological research. Throughout his career Satyasheelji has been performing in major musical events in India as well as abroad.

The Deshpande household was one in which music-making was an important part of daily life. The great masters of the time frequently stayed there for long periods and Satyasheelji grew up surrounded by maestros like Pandit Bhimsen Joshi, Late Padmabhushan Mogubai Kurdikar, Late Vasantrao Deshpande and most importantly Late Pandit Kumar Gandharva, who was later to become his chief guru and mentor. His innate sense of rhythmic precision and inventiveness has lead to the masterful rhythmic improvisations that characterize his music today. He was also drawn towards lighter classical forms like ‘thumri’, ‘dadra’, ‘bhajan’ and the ‘Ghazal’. He has always felt that the appreciation of classical forms cannot be complete unless it is accompanied by sensitivity to popular and folk forms. Over the years, he has shown marvelous flexibility, both as a musical thinker and a practitioner of the art, allowing himself to be influenced by various cultural streams and flowing along with them whenever he has felt artistically impelled to do so.

His interest in the rich folk-culture around him lead to a deep love-affair with the Hindi language. Satyasheelji began to study in depth the work of Hindi poets of the Bhakti tradition; Surdas, Tulsidas, Kabir and Meera. His own command over the Hindi language and the sheer finesse and inventiveness with which he handles it, is evident in the lyrics of his own compositions and in the essays which he has written from time to time on various aspects of music.

In 1972 he became a formal disciple of Pandit Kumar Gandharva. Kumarji, though he remained a classicist in essence, was specifically interested in this cultural connection. The ‘taleem’ which Satyasheelji received in his years with Kumarji did not involve the conventional pedagogies that are associated with the learning and teaching of music. He chose, instead, to expose Satyasheelji to a range of musical approaches, emphasising the underlying principles at work in each case, and encouraging him to look directly at the various possibilities contained within each approach. Very few musicians, anywhere in the country, have ever been equipped – either technically or intellectually – to effectively receive the kind of training Kumarji gave to his foremost student.

On returning to Mumbai, in 1975, Satyasheelji began to perform regularly in large public concerts, including all the major music festivals in the country. His music began to show a subtle combination of eclecticism and individualism. In 1977, he made his first foreign tour as a performer, singing extensively in Amsterdam, Paris and the U.K. This was followed in 1980, by a concert-tour in the U.S. His performances at the Sawai Gandharva Festival in 1977, 1982,1994 and 2004 have brought him widespread recognition. In particular, the his recent performance at Savai Gandharva 2004 earned him great applause amidst requests for encores – a fitting tribute to the unrelenting transparency, honesty and sheer beauty of his music.

In 1975, Satyasheelji founded the Samvaad Foundation, an archive of over 7000 hours of recorded Hindustani classical music. A major portion of this recording was done by Satyasheelji himself, with the aid of grants from the Ford Foundation. In this process, Satyasheelji recorded, and was exposed to various greats Ustad Salamat Ali, Ustad Nayaz Ahmed, Ustad Aslam Khan, Pandit Jitendra Abhisheki, Pandit K.G.Ginde, Pandit C.P. Rele, Shobha Gurtu, Pandit Jagdish Prasad and Pandit Ramashreya Jha, amongst a host of others. This work has contributed deeply to his own growth as an artist. His music is thus a complex texture of multifarious musical strands, that have been carefully chosen and woven meticulously into a single fabric. He has been particularly careful about what to imbibe from whom, and how to adjust whatever he has received to his own artistic sensibility. 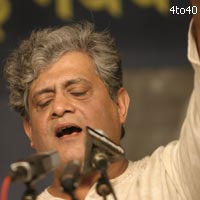 While maintaining an austere – though far from orthodox – commitment to classical values, Satyasheelji has not lost touch with his early love for lighter forms. Besides his love for folk music, he has also sung professionally in several films and has been closely associated with Hridayanath Mangeshkar. In 1982 he sang in ‘Vijeta’ and in 1992 he received the ‘Best Playback Singer of the Year’ award for his singing in ‘Lekin’. The duet which he sang along with Asha Bhonsle, in ‘Lekin’ became immediately popular. He also sang in Ram Gabale’s Marathi film, ‘He Geet Jeevanache’, in which, in addition to his solo classical singing, he sang a duet with Lata Mangeshkar.

Satyasheelji has also been a devoted teacher of Hindustani music. Amongst his foremost disciples are Shri Krishna Bhat and Shri Anand Thakore, both of whom perform regularly in public concerts. They are both promising students and performers and have played an active role in the research and documentational activities at the Samvaad Foundation.

Satyasheelji’s latest achievement is his new album, entitled ‘Kahen’ released at the hands of Bharat Ratna Lata Mangeshkar, who has also graced the album with an introduction. ‘Kahen’ is Satyasheelji’s attempt to rediscover the melodic and lyrical aspects of raaga sangeet through a number of bandishes, his own as well as traditional. The making of ‘Kahen’ was done under the supervision of Pt. Hridaynath Mangeshkar. ‘Kahen’ has been received with great appreciation both by classical connoisseurs as well as lovers of lighter forms of music. Because of the incredible melody, lyricism and expressiveness of these concise renditions, ‘Kahen’ presents a lot of appeal for today’s youth. Without any compromise as far as classicism in terms of raga and taal are concerned, Satyasheelji has created an album that will compel today’s youth to view Hindustani Sangeet from a fresh perspective.

Share
Previous Priyanka Chopra
Next Why does one need to boil milk repeatedly to preserve it without refrigeration?