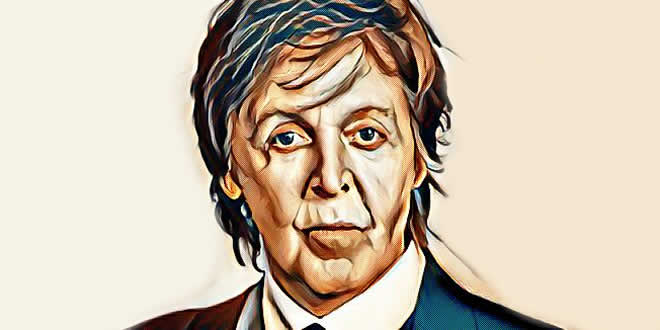 Paul McCartney — Sir James Paul McCartney, MBE, Hon RAM, FRCM (born 18 June 1942) is an English musician, singer-songwriter and composer. Formerly of The Beatles (1960–1970) and Wings (1971–1981), McCartney is listed in Guinness World Records as the “most successful musician and composer in popular music history”, with 60 gold discs and sales of 100 million singles in the United Kingdom alone.

McCartney gained worldwide fame as a member of The Beatles, alongside John Lennon, George Harrison, and Ringo Starr. McCartney and Lennon formed one of the most influential and successful songwriting partnerships and wrote some of the most popular songs in the history of rock music. After leaving The Beatles, McCartney launched a successful solo career and formed the band Wings with his first wife, Linda Eastman, and singer-songwriter Denny Laine.

BBC News Online readers named McCartney the “greatest composer of the millennium”. According to the BBC, his Beatles song “Yesterday” has been covered by over 2,200 artists — more than any other song in the history of recorded music. Since its 1965 release it has been played more than 7,000,000 times on American television and radio. Wings’ 1977 single “Mull of Kintyre” became the first single to sell more than two million copies in the United Kingdom and remains the UK’s top selling non-charity single. Based on the 93 weeks his compositions have spent at the top spot of the UK chart, and 24 number one singles to his credit, McCartney is the most successful songwriter in UK singles chart history. As a performer or songwriter, McCartney was responsible for 31 number one singles on the Billboard Hot 100 chart in the United States, and has sold 15.5 million RIAA certified albums in the United States alone.

McCartney has composed film scores, classical and electronic music, released a large catalogue of songs as a solo artist, and has taken part in projects to help international charities. He is an advocate for animal rights, for vegetarianism, and for music education; he is active in campaigns against landmines, seal hunting, and Third World debt. He is a keen football fan, supporting both Everton and Liverpool football clubs. His company MPL Communications owns the copyrights to more than 3,000 songs, including all songs written by Buddy Holly, along with the publishing rights to such musicals as Guys and Dolls, A Chorus Line, and Grease. McCartney is one of the UK’s wealthiest people, with an estimated fortune of £475 million in 2010.

McCartney was born in Walton Hospital in Liverpool, England, where his mother, Mary (nee Mohin), had worked as a nurse in the maternity ward. He has one brother, Michael, born 7 January 1944. McCartney was baptised as a Roman Catholic but was raised non-denominationally: his mother was Roman Catholic and his father James, or “Jim” McCartney, was a Protestant turned agnostic.

In 1947, he began attending Stockton Wood Road Primary School. He then attended the Joseph Williams Junior School and passed the 11-plus exam in 1953 with three others out of the 90 examinees, thus gaining admission to the Liverpool Institute. In 1954, while taking the bus from his home in the suburb of Speke to the Institute, he met George Harrison, who lived nearby. Passing the exam meant that McCartney and Harrison could go to a grammar school rather than a secondary modern school, which the majority of pupils attended until they were eligible to work, but as grammar school pupils, they had to find new friends.

In 1955, the McCartney family moved to 20 Forthlin Road in Allerton. Mary McCartney rode a bicycle to houses where she was needed as a midwife, and an early McCartney memory is of her leaving when it was snowing heavily. On 31 October 1956, Mary McCartney died of an embolism after a mastectomy operation to stop the spread of her breast cancer. The early loss of his mother later connected McCartney with John Lennon, whose mother Julia died after being struck by a car when Lennon was 17.

McCartney’s father was a trumpet player and pianist who had led Jim Mac’s Jazz Band in the 1920s and encouraged his two sons to be musical. Jim had an upright piano in the front room that he had bought from Epstein’s North End Music Stores. McCartney’s grandfather, Joe McCartney, played an E-flat tuba. Jim McCartney used to point out the different instruments in songs on the radio, and often took McCartney to local brass band concerts. McCartney’s father gave him a nickel-plated trumpet, but when skiffle music became popular, McCartney swapped the trumpet for a £15 Framus Zenith (model 17) acoustic guitar. As he was left-handed, McCartney found right-handed guitars difficult to play, but when he saw a poster advertising a Slim Whitman concert, he realized that Whitman played left-handed with his guitar strung the opposite way to a right-handed player. McCartney wrote his first song (“I Lost My Little Girl”) on the Zenith, and also played his father’s Framus Spanish guitar when writing early songs with Lennon. He later learned to play the piano and wrote his second song, “When I’m Sixty-Four”. On his father’s advice, he took music lessons, but since he preferred to learn ‘by ear’ he never paid much attention to them.

McCartney was heavily influenced by American Rhythm and Blues music. He has stated that Little Richard was his idol when he was in school and that the first song he ever sang in public was “Long Tall Sally”, at a Butlins holiday camp talent competition.

McCartney is one of Britain’s wealthiest musicians, with an estimated fortune of £750 million ($1.2 billion) in 2009, although Justice Bennett, in his judgement on McCartney’s divorce case found no evidence that McCartney was worth more than £400 million. In December 1998, he was approached to purchase a stake in Everton Football Club by former school friend Bill Kenwright who wished to put a consortium together but McCartney chose to decline the offer. In addition to his interest in Apple Corps, McCartney’s MPL Communications owns a significant music publishing catalogue, with access to over 25,000 copyrights. McCartney earned £40 million in 2003, making him Britain’s highest media earner. This rose to £48.5 million by 2005. In the same year he joined the top American talent agency Grabow Associates, who arrange private performances for their richest clients. Northern Songs was established in 1963, by Dick James, to publish the songs of Lennon–McCartney.

The Beatles’ partnership was replaced in 1968 by a jointly held company, Apple Corps, which continues to control Apple’s commercial interests. Northern Songs was purchased by Associated Television (ATV) in 1969, and was sold in 1985 to Michael Jackson. For many years McCartney was unhappy about Jackson’s purchase and handling of Northern Songs.

MPL Communications is an umbrella company for McCartney’s business interests, which owns a wide range of copyrights, as well as the publishing rights to musicals. In 2006, the Trademarks Registry reported that MPL had started a process to secure the protections associated with registering the name “Paul McCartney” as a trademark. The 2005 films, Brokeback Mountain and Good Night, and Good Luck, feature MPL copyrights.

In April 2009, it was revealed that McCartney, in common with other wealthy musicians, had seen a significant decline in his net worth over the preceding year. It was estimated that his fortune had fallen by some £60m, from £238m to £175m. The losses were attributed to the ongoing global recession, and the resultant decline in value of property and stock market holdings.