Pablo Picasso — Pablo Ruiz y Picasso, also known as Pablo Picasso (25 October 1881 – 8 April 1973), was a Spanish painter, sculptor, printmaker, ceramicist, stage designer, poet and playwright who spent most of his adult life in France. As one of the greatest and most influential artists of the 20th century, he is known for co-founding the Cubist movement, the invention of constructed sculpture, the co-invention of collage, and for the wide variety of styles that he helped develop and explore. Among his most famous works are the proto-Cubist Les Demoiselles d’Avignon (1907), and Guernica (1937), a portrayal of the Bombing of Guernica by the German and Italian airforces at the behest of the Spanish nationalist government during the Spanish Civil War.

To say that Pablo Picasso dominated Western art in the 20th century is, by now, the merest commonplace. Before his 50th birthday, the little Spaniard from Malaga had become the very prototype of the modern artist as public figure. No painter before him had had a mass audience in his own lifetime. The total public for Titian in the 16th century or Velazquez in the 17th was probably no more than a few thousand people–though that included most of the crowned heads, nobility and intelligentsia of Europe. Picasso’s audience–meaning people who had heard of him and seen his work, at least in reproduction–was in the tens, possibly hundreds, of millions. He and his work were the subjects of unending analysis, gossip, dislike, adoration and rumor. 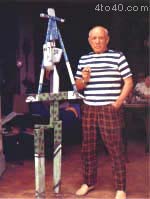 He was a superstitious, sarcastic man, sometimes rotten to his children, often beastly to his women. He had contempt for women artists. His famous remark about women being “goddesses or doormats” has rendered him odious to feminists, but women tended to walk into both roles open-eyed and eagerly, for his charm was legendary. Whole cultural industries derived from his much mythologized virility. He was the Minotaur in a canvas-and-paper labyrinth of his own construction.

He was also politically lucky. Though to Nazis his work was the epitome of “degenerate art,” his fame protected him during the German occupation of Paris, where he lived; and after the war, when artists and writers were thought disgraced by the slightest affiliation with Nazism or fascism, Picasso gave enthusiastic endorsement to Joseph Stalin, a mass murderer on a scale far beyond Hitler’s, and scarcely received a word of criticism for it, even in cold war America.

No painter or sculptor, not even Michelangelo, had been as famous as this in his own lifetime. And it is quite possible that none ever will be again, now that the mandate to set forth social meaning, to articulate myth and generate widely memorable images has been so largely transferred from painting and sculpture to other media: photography, movies, television. Though Marcel Duchamp, that cunning old fox of conceptual irony, has certainly had more influence on nominally vanguard art over the past 30 years than Picasso, the Spaniard was the last great beneficiary of the belief that the language of painting and sculpture really mattered to people other than their devotees. And he was the first artist to enjoy the obsessive attention of mass media. He stood at the intersection of these two worlds. If that had not been so, his restless changes of style, his constant pushing of the envelope, would not have created such controversy–and thus such celebrity.

In today’s art world, a place without living culture heroes, you can’t even imagine such a protean monster arising. His output was vast. This is not a virtue in itself–only a few paintings by Vermeer survive, and fewer still by the brothers Van Eyck, but they are as firmly lodged in history as Picasso ever was or will be. Still, Picasso’s oeuvre filled the world, and he left permanent marks on every discipline he entered. His work expanded fractally, one image breeding new clusters of others, right up to his death.

Moreover, he was the artist with whom virtually every other artist had to reckon, and there was scarcely a 20th century movement that he didn’t inspire, contribute to or–in the case of Cubism, which, in one of art history’s great collaborations, he co-invented with Georges Braque–beget. The exception, since Picasso never painted an abstract picture in his life, was abstract art; but even there his handprints lay everywhere–one obvious example being his effect on the early work of American Abstract Expressionist painters, Arshile Gorky, Jackson Pollock and Willem de Kooning, among others.

Much of the story of modern sculpture is bound up with welding and assembling images from sheet metal, rather than modeling in clay, casting in bronze or carving in wood; and this tradition of the open constructed form rather than solid mass arose from one small guitar that Picasso snipped and joined out of tin in 1912. If collage–the gluing of previously unrelated things and images on a flat surface–became a basic mode of modern art, that too was due to Picasso’s Cubist collaboration with Braque. He was never a member of the Surrealist group, but in the 1920s and ‘30s he produced some of the scariest distortions of the human body and the most violently irrational, erotic images of Eros and Thanatos ever committed to canvas. He was not a realist painter/reporter, still less anyone’s official muralist, and yet Guernica remains the most powerful political image in modern art, rivaled only by some of the Mexican work of Diego Rivera.

Picasso was regarded as a boy genius, but if he had died before 1906, his 25th year, his mark on 20th century art would have been slight. The so-called Blue and Rose periods, with their wistful etiolated figures of beggars and circus folk, are not, despite their great popularity, much more than pendants to late 19th century Symbolism. It was the experience of modernity that created his modernism, and that happened in Paris. There, mass production and reproduction had come to the forefront of ordinary life: newspapers, printed labels, the overlay of posters on walls–the dizzily intense public life of signs, simultaneous, high-speed and layered. This was the cityscape of Cubism.

Picasso was not a philosopher or a mathematician (there is no “geometry” in Cubism), but the work he and Braque did between 1911 and 1918 was intuitively bound to the perceptions of thinkers like Einstein and Alfred North Whitehead: that reality is not figure and void, it is all relationships, a twinkling field of interdependent events. Long before any Pop artists were born, Picasso latched on to the magnetism of mass culture and how high art could refresh itself through common vernaculars. Cubism was hard to read, willfully ambiguous, and yet demotic too. It remains the most influential art dialect of the early 20th century. As if to distance himself from his imitators, Picasso then went to the opposite extreme of embracing the classical past, with his paintings of huge dropsical women dreaming Mediterranean dreams in homage to Corot and Ingres.

His “classical” mode, which he would revert to for decades to come, can also be seen as a gesture of independence. After his collaboration with Braque ended with his comment that “Braque is my wife”–words that were as disparaging to women as to Braque–Picasso remained a loner for the rest of his career. But a loner with a court and maitresses en titre. He didn’t even form a friendship with Matisse until both artists were old. His close relationships tended to be with poets and writers.

Though the public saw him as the archetypal modernist, he was disconnected from much modern art. Some of the greatest modern painters–Kandinsky, for instance, or Mondrian–saw their work as an instrument of evolution and human development. But Picasso had no more of a Utopian streak than did his Spanish idol, Goya. The idea that art evolved, or had any kind of historical mission, struck him as ridiculous. “All I have ever made,” he once said, “was made for the present and in the hope that it will always remain in the present. When I have found something to express, I have done it without thinking of the past or the future.” Interestingly, he also stood against the Expressionist belief that the work of art gains value by disclosing the truth, the inner being, of its author. “How can anyone enter into my dreams, my instincts, my desires, my thoughts … and above all grasp from them what I have been about–perhaps against my own will?” he exclaimed.

To make art was to achieve a tyrannous freedom from self-explanation. The artist’s work was mediumistic (“Painting is stronger than me, it makes me do what it wants”), solipsistic even. To Picasso, the idea that painting did itself through him meant that it wasn’t subject to cultural etiquette. None of the other fathers of Modernism felt it so strongly–not Matisse, not Mondrian, certainly not Braque.

In his work, everything is staked on sensation and desire. His aim was not to argue coherence but to go for the strongest level of feeling. He conveyed it with tremendous plastic force, making you feel the weight of forms and the tension of their relationships mainly by drawing and tonal structure. He was never a great colorist, like Matisse or Pierre Bonnard. But through metaphor, he crammed layers of meaning together to produce flashes of revelation. In the process, he reversed one of the currents of modern art. Modernism had rejected storytelling: what mattered was formal relationships. But Picasso brought it back in a disguised form, as a psychic narrative, told through metaphors, puns and equivalences.

The most powerful element in the story–at least after Cubism–was sex. The female nude was his obsessive subject. Everything in his pictorial universe, especially after 1920, seemed related to the naked bodies of women. Picasso imposed on them a load of feeling, ranging from dreamy eroticism (as in some of his paintings of his mistress Marie-Therese Walter in the ‘30s) to a sardonic but frenzied hostility, that no Western artist had made them carry before. He did this through metamorphosis, recomposing the body as the shape of his fantasies of possession and of his sexual terrors. Now the hidden and comparatively decorous puns of Cubism (the sound holes of a mandolin, for instance, becoming the mask of Pierrot) came out of their closet. “To displace,” as Picasso described the process, “to put eyes between the legs, or sex organs on the face. To contradict. Nature does many things the way I do, but she hides them! My painting is a series of cock-and-bull stories.”

There seems little doubt that the greatest of Picasso’s work came in the 30 years between Les Demoiselles d’Avignon (1907) and Guernica (1937). But of course he didn’t decline into triviality. Consistently through the war years and the ‘50s, and even now and then in the ‘60s and ‘70s, he would produce paintings and prints of considerable power. Sometimes they would be folded into series of variations on the old masters and 19th century painters he needed to measure himself against, such as Velazquez and Goya, or Poussin, Delacroix, Manet and Courbet. In his last years particularly, his production took on a manic and obsessive quality, as though the creative act (however repetitious) could forestall death. Which it could not. His death left the public with a nostalgia for genius that no talent today, in the field of painting, can satisfy.

Share
Previous Why does hair turn grey?
Next Why does iron go red when heated?