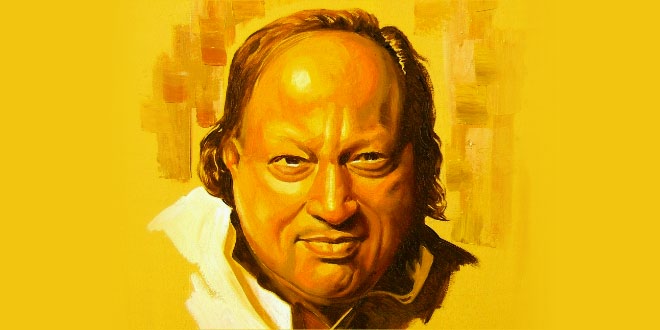 Nusrat’s father, Ustad Fateh Ali Khan, and two of his uncles, Ustad Mubarik Ali Khan and Ustad Salamat Ali Khan, were famous qawwals (practitioners of qawwali) who sang in the classical form. Although Nusrat began to display a penchant for music and a particular aptitude for singing before he had reached age 10, he did not begin to devote himself to the qawwali tradition until he sang at his father’s funeral in 1964. Two years later he gave his first public performance as a qawwal, singing with his uncles, with whom he continued to perform until 1971, when Ustad Mubarik died.

Qawwali originated in 12th-century Persia. The lyrics are based on medieval Sufi poems that often use images of romantic love to express deep religious faith. The traditionally male qawwal, who knows these poems by heart, unites phrases and passages from different poems to create a new expression. Qawwali performances are typically held in shrines and are marked by passionate shouting and dancing. Qawwali is similar in spirit to American gospel music.

Following his father’s death, Nusrat continued to study the recordings of his father and uncles, using them as a springboard from which to develop his own style. Within just a few years he had established himself throughout Pakistan as the outstanding qawwal of his generation, singing powerfully and expressively in a very high register (a family trademark), with remarkable stamina and melodic creativity. In concert he was usually accompanied by tabla, harmoniums, and backing vocals.

As he matured as a performer, Nusrat made various adjustments to his style, such as increasing the tempo, as a means to elevate qawwali to a new level of aesthetic and spiritual resonance with contemporary—and international—audiences. In 1985 he gave a concert in the United Kingdom, and word of his talent began to spread. He was soon performing regularly throughout Europe. He first toured the United States in 1989, and in the 1990s he contributed to the sound tracks of several popular films. Nusrat also worked with a number of internationally recognized figures in popular and art music. Popular musician Peter Gabriel promoted Nusrat on the world music circuit through his WOMAD (World of Music, Arts and Dance) festivals and through recordings on his Real World Records label. Meanwhile, composer Michael Brook helped increase the accessibility of Nusrat’s vocalizations by recasting them within Western rhythmic frameworks. Nusrat believed in the universality of the musical message and strove throughout his career to make his music transcend religious and cultural boundaries. When he died suddenly in 1997, Nusrat was mourned by fans across the globe.