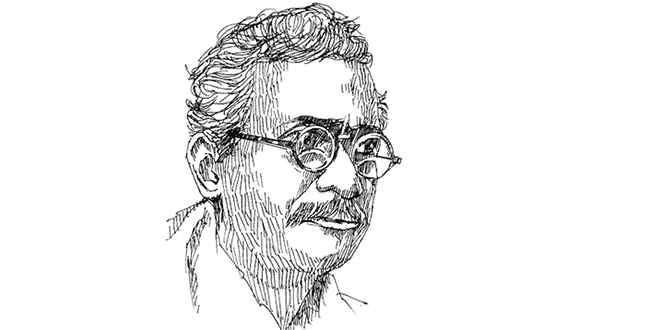 Nandalal Bose (3 December 1882 – 16 April 1966) was a notable Indian painter of Bengal school of art. A pupil of Abanindranath Tagore, Bose was known for “Indian style” of painting. He became the principal of Kala Bhawan, Shanti Niketan in 1922. He was influenced by the Tagore family and the murals of Ajanta, his classic works include paintings of scenes from Indian mythologies, women, and village life.

Today, his paintings are considered among India’s best modern paintings by many critics.

Along with his favorite students like Beohar Rammanohar Sinha and others, Nandalal Bose took-up the historic task of beautifying / decorating the original manuscript of the Constitution of India. In 1976, the Archaeological Survey of India, Department of Culture, Govt. of India declared his works among the “nine artists”, whose work not being antiquities, were to be hence forth considered to be ‘art treasures’.

Nandalal Bose as a young artist was deeply influenced by the murals of Ajanta, already part of a circle of artists and writers who sought to revive classical Indian culture.

To mark the 1930 occasion of Gandhi’s arrest for protesting the British tax on salt, Bose created a black on white linocut print of Gandhi walking with a staff. It became the iconic image for the non-violent movement.

He was also famously asked by Jawaharlal Nehru to sketch the emblems for the Government of India’s awards, including the Bharat Ratna and the Padmashri.

His genius and original style were recognized by famous artists and art critics like Gaganendranath Tagore, Ananda Coomaraswamy and O.C. Ganguli. These lovers of art felt that objective criticism was necessary for the development of painting and founded the Indian Society of Oriental Art.

He became principal of the Kala Bhavana (College of Arts) at Tagore’s International University Santiniketan in 1922.

In 1954 , Nandalal Bose was conferred-upon the title award of ‘Padma Vibhushan’. Nandalal Bose was awarded a prize of Rs. 500 at the first art exhibition organized by it in 1908 CE for his painting Shiva-Sati. In 1956 CE, he became the second artist to be elected Fellow of the Lalit Kala Akademi, India’s National Academy of Art.

Several universities conferred honorary Doctorates on him. Vishvabharati University honored him by conferring on him the title of ‘Deshikottama’. The Academy of Fine Arts in Calcutta honored Nandalal with the Silver Jubilee Medal. The Tagore Birth Centenary Medal was awarded to Nandalal Bose in 1965 CE by the Asiatic Society of Bengal.