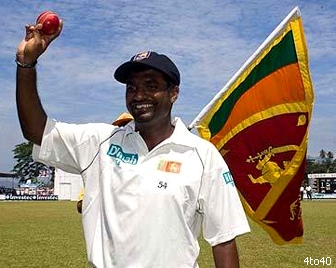 Muttiah Muralitharan (born 17 April 1972), often referred to as Murali, is a Sri Lankan cricketer, who was rated the greatest Test match bowler ever by Wisden Cricketers’ Almanack in 2002.

Muralitharan is the highest wicket-taker in both Test cricket and in One Day Internationals (ODIs). He took the wicket of Gautam Gambhir on 5 February 2009 in Colombo to surpass Wasim Akram’s ODI record of 502 wickets. Muralitharan became the highest wicket-taker in Test cricket when he overtook the previous record-holder Shane Warne on 3 December 2007. Muralitharan had previously held the record when he surpassed Courtney Walsh’s 519 wickets in 2004, but he suffered a shoulder injury later that year and was then overtaken by Warne.

Averaging over six wickets per Test, Muralitharan was one of the most successful bowlers in the game. He plays domestic cricket for the Tamil Union Cricket and Athletic Club, and plays in the Indian Premier League for Chennai Super Kings.

Muralitharan’s career has been beset with controversy; his bowling action called into question on a number of occasions by umpires and sections of the cricket community. After biomechanical analysis in non-match conditions, Muralitharan’s action was cleared by the International Cricket Council, first in 1996 and again in 1999. The legality of his doosra was first called into question in 2004. This delivery was found to exceed the ICC elbow extension limit by nine degrees, five degrees being the limit for spinners at that time. Based on official studies into bowling actions, which revealed that 99% of all bowlers exceed the elbow flexion limits, ICC revised the limits applying to all bowlers in 2005. Muralitharan’s doosra falls within the revised limits. 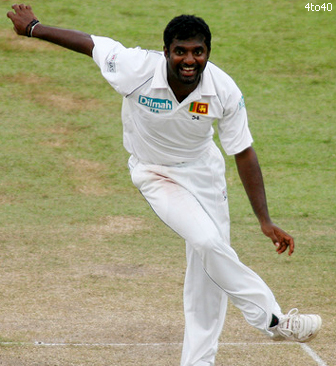 In February 2009, after becoming cricket’s highest wicket-taker in both forms of the game Muttiah Muralitharan hinted that he may retire at the conclusion of the 2011 World Cup. He stated “I think I am fit in my body and mind, I am enjoying my cricket and want to play more. But after the next World Cup, I will have nothing left to achieve in the game. The World Cup should mark the end of my career.”

On 7 July 2010, Muttiah Muralitharan formally announced his retirement from Test cricket at a media briefing in Colombo. He confirmed that the first Test Match against India due to commence on 18 July, 2010 would be his last, but indicated that he was willing to play One-Day Internationals if it was considered necessary leading up to the 2011 World Cup, which Sri Lanka will co-host. He identified Sri Lanka’s World Cup win of 1996 as his greatest moment as a cricketer. He also stated that there were some regrets during his 19 year playing career. “Not winning Test Matches in South Africa, Australia and India are regrets. But I am sure we will win very soon.”

At the start of his last match, Muralitharan was eight short of 800 wickets. At the fall of the ninth wicket of the Indian’s second innings Murali still needed one wicket to reach the milestone. After 90 minutes of resistance Muralitharan was able to dismiss the last Indian batsman Pragyan Ojha. By doing so he became the first bowler to reach 800 wickets in Test cricket. Sri Lanka won the match by 10 wickets, the seventh time they have done so and the second time they have done it against India.

Averaging nearly six wickets per Test, Muttiah Muralitharan is one of the most successful bowlers in the game, the greatest player in Sri Lanka’s history, and without doubt the most controversial cricketer of the modern age. Muralitharan’s rise from humble beginnings, being the Tamil son of a hill-country confectioner, to the top of the wicket-takers’ list in Test cricket has divided the cricket world in the past decade because of his weird bent-arm bowling action. 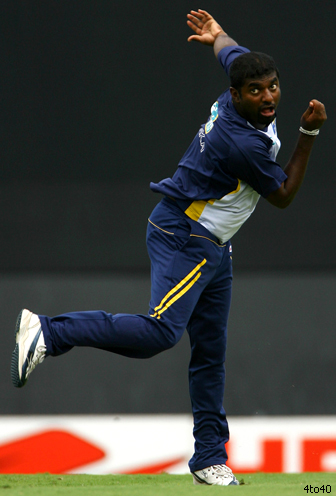 He bowls marathon spells, yet is forever on the attack. From a loose-limbed, open-chested action, his chief weapons are the big-spinning offbreak and two versions of the top-spinner, one of which goes straight on and the other, which has now been labelled his doosra, which spins in the opposite direction to his stock ball. His newest variation is a version of Shane Warne’s slider, which is flicked out the side of his hand and rushes onto batsmen like a flipper. His super-flexible wrist makes him especially potent and guarantees him turn on any surface.

His career has been beset with controversy from the start. Suspicions about his action were whispered soon after his debut against the Australians in 1993 and then aired freely after he was called for throwing while touring Australia in 1995-96, first in the Boxing Day Test at Melbourne by Darrel Hair and later in the one-day series that followed. He was cleared by the ICC after biomechanical analysis at the University of Western Australia and at the University of Hong Kong in 1996. They concluded that his action created the ‘optical illusion of throwing’.

But the controversy did not die away. He was called again on the 1998-99 tour to Australia, this time by Ross Emerson. Muralitharan was sent for further tests in Perth and England and was cleared again. However, the perfection of his doosra prompted further suspicion and at the end of a prolific three-match home series against Australia in March 2004 he was reported by ICC match referee Chris Broad. More high-tech tests followed, and ultimately forced the ICC to seriously look into the entire issue of throwing in international cricket, which revealed that many bowlers bend their arms during delivery, and that Murali might have been made an unfair victim. On the field, Murali continued to pile on the wickets, overtaking Courtney Walsh’s 519-wicket world record to become the highest wicket-taker in Test history in May 2004.

It is unlikely that Muralitharan’s career will ever be controversy-free, a fact that he now accepts. But the rapid progress of technology and sports science in the past decade has undoubtedly salvaged his reputation. He continues to pick up wickets by the bucket load, although many large hauls have come against the two weakest nations – Zimbabwe and Bangladesh. However, he saves his most stunning efforts for the big boys, such as his duel with the Australians in 2004 and his eight-wicket haul at Trent Bridge in 2006 which produced a famous series-levelling win against England.

Muralitharan picked up 23 wickets in the 2007 World Cup, though Sri Lanka were unable to repeat their 1996 final win against Australia. Muralitharan next featured in the home Test series against Bangladesh when, with the last of his 26 wickets, he became the second player to 700 Test wickets. He duly passed Warne’s Test record of 708 wickets against England in December 2007, fittingly on his home ground in Kandy. Now, Murli the first bowler to reach 800 wickets in Test cricket.

Share
Previous Who is Tommy Atkins?
Next Who led the way to the stars?