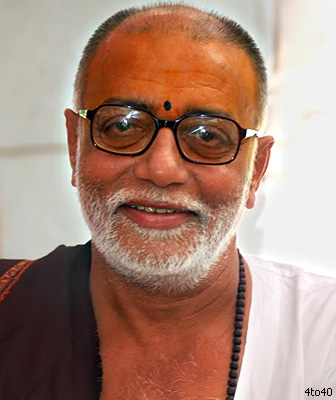 Morari Bapu, real name Moraridas Prabhudas Hariyani born on September 25, 1946 in Talgajarda is a popular Hindu kathakaar (preacher), who has been giving 9 day-long sermons (kathaas) in both Gujarati and Hindi all over the world—including in India, the United States, the United Kingdom, South Africa, Kenya, Uganda, on a cruise ship in the Mediterranean Sea, and on an airplane travelling the world—since the mid-1970s.

To date, he has conducted over 700 kathaas, most of them based on the Ramcharitmanas of Tulsidas and other such works about Rama as well as Gopigeet which has the gopis of Vrindavan singing of the glory of Krishna.

He became to be called as “Bapu” (meaning Father or elderly person) lovingly by people. His grandfather, Tribhovandasji was a great Ram Bhakta (devotee of Sri Rama) and used to make young Morari memorize five verses of the Ramcharitamanas each day, on his way to school and back.

Further, he at young age was also encouraged via letters from his paternal great grand father, Mahamandleshwar Vishnu Giriji Maharaj, who was head of “Kailas Ashram” at Rishikesh, to be proficient in the Bhagvat Gita and the Vedas.

Morari Bapu has started his career as a primary school teacher in near by village to Talgajarda, he worked for several years, side by side he was doing Ram Kathas.

Share
Previous Who discovered the source of the Nile?
Next Monkombu Sambasivan Swaminathan