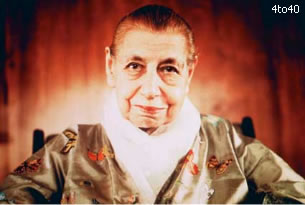 Mira Alfassa, later named as ‘the Mother’, was the spiritual partner of Sri Aurobindo. After Sri Aurobindo renounced the worldly life and went into seclusion, she looked after Auroville, also known as Sri Aurobindo Ashram. Read on to know more about the biography of Mirra Alfassa ‘the Mother’.

The Mother was born as Mira Alfassa in the year 1878, in France. Her mother was an Egyptian, while her father was Turkish. She also had an older brother named Matteo. Mira Alfassa lost all interest in worldly life when she was only five years old and from then onwards began her journey on the path of meditation and spirituality. As per ‘the Mother’ herself, she had a number of psychic and spiritual experiences between the age of eleven and thirteen. Through these visions, she came to realize the existence of God. In the year 1897, she got married to Henri Morisset, a student of Moreau.

As per Mira Alfassa, she received enlightenment between the age of nineteen and twenty, without the help of any books or teachers. Later, she took recourse to Raja Yoga and the”Bhagwad Gita” to move forward on the path of spirituality.

Mira Alfassa met the mysterious occultist, Max Théon, who helped her in understanding the psychic visions she had so often experienced. In 1908, Mirra divorced Morisset and moved to Paris. Around 1910, she again got married to Paul Richard.

Mira, along with her husband Paul Richard, left for India on 7th March 1914. They reached Pondicherry on 29th March and met Sri Aurobindo. It is said that the moment Mira saw Sri Aurobindo she recognized him as person she saw in her visions of a dark Asiatic figure. Mira and Paul left for France in February 1915. However, they came back to Pondicherry in April 1920 and from 1922, she started regular evening talks and group meditations. Mira Alfassa was given the name of ‘the Mother by Sri Aurobindo only.

In December 1926, Sri Aurobindo decided to renounce the world and retire from the public view. In his place, he appointed Mira Alfassa to take over the administration of Aurobindo Ashram, later named Auroville. In 1973, Mira Alfassa, ‘the Mother’, left this world to become one with the Supreme Being.

Share
Previous Which was the first public railway worked entirely by steam locomotive?
Next Which was the largest battleship ever built?