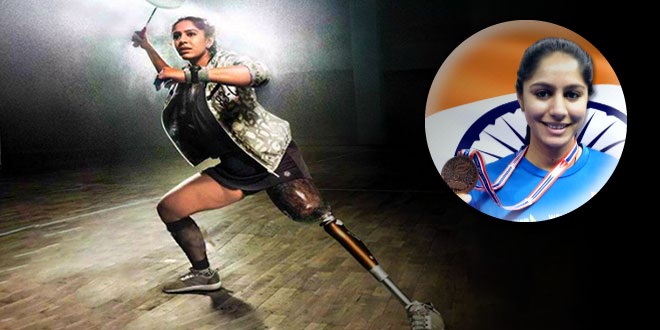 Manasi Joshi is an Indian Para-Badminton athlete who is currently World No. 2 in SL3 Singles. She was six when she started playing badminton with her father, a retired scientist from Bhabha Atomic Research Centre. An engineer by qualification, she completed her graduation in Electronics Engineering from K. J. Somaiya College of Engineering, University of Mumbai in 2010. In 2011, she met with a road accident and lost her left leg. In September 2015, she won a Silver Medal in Mixed doubles at the Para-Badminton World Championship held in Stoke Mandeville, England. In October 2018, Manasi won a Bronze medal for India at the Asian Para Games 2018, held in Jakarta, Indonesia. She won a Gold medal for India at the Para Olympics 2019.

The story of Manasi Joshi is that of pure grit and determination. After losing her left leg in an accident in 2011, Manasi took up badminton as a way to stay fit. Although she started playing the sport at a young age, it was not something that she perceived as a profession. She was working as a software engineer and badminton became her way of staying fit despite sitting at the desk every day.

“I started playing badminton at the age of 8-9. After the accident, my motivation behind playing the game was mainly to maintain my fitness. I had a desk job and I wanted to keep myself fit but gradually it became a passion for me.” Joshi told media during an exclusive telephonic conversation.

Her game started improving with time and despite not getting selected for the 2014 Para Asian Games, the shuttler did not lose hope. She came back stronger next year and won silver in mixed doubles at the Para-Badminton World Championships. She continued to clinch titles in various tournaments around the world and in 2018, she claimed the bronze medal at the Asian Para Games held in Jakarta, Indonesia.

After losing her left leg in an accident in 2011, Manasi took up badminton as a way to stay fit. Although she started playing the sport at a young age, it was not something that she perceived as a profession.

However, the biggest feather in her cap was her win in the final of the recently concluded Para Badminton World Championships where she defeated compatriot Parul Parmer in the women’s singles SL3 category.

“I am elated after the result. Honestly, I was surprised but I was also somewhere prepared for this. I knew that the result will be better than previous years but never expected to win gold. Even before the semi-final, I was confident of reaching the final but the gold medal was still a distant dream”, she said.

It was not an easy feat for Manasi Joshi as her record against Parul Parmer was a major cause for concern. The two players faced each other thrice this year and Manasi Joshi was defeated on all three occasions.

The summit clash in Basel (Switzerland) seemed headed in the same direction as Manasi Joshi trailed 2-7 in the first game but this time, she had other plans. The shuttler fought back brilliantly to clinch the first game and an almost flawless show in the second game helped her clinch the match 21-12, 21-17 and also her first World Championships title.

“My record against her (Parul) has always been quite disappointing but I felt confident that I will be able to beat her. The fact that I faced her in the final did come with some extra pressure but I believe that I was prepared. In the first game, I was a bit concerned. But the moment I won the first game, I was confident that I can win the match and that helped me a lot,” she explained.

Ahead of the tournament, Joshi trained at the Gopichand Academy where national coach Pulella Gopichand and head coach Jakkampudi Rajendra Kumar created a special training regiment for her. It was quite different from her usual schedule and Joshi believes that it made a lot of difference in the competition.

“My time at the Gopichand Academy was highly beneficial to my game. I was playing a lot of tournaments and as a result, I decided to take a month long break. Gopi sir and Rajendra sir specially prepared a training regiment for me and a lot of focus was put on my fitness. I used to have three sessions – on-court, off court and finally I used to play games against anyone who was available”.

“There was also a dedicated fitness trainer who worked on my health and conditioning. My aim was to be in great shape ahead of the tournament and that helped me a lot in my campaign,” she added.

The response on social media has been massive as fans were ecstatic about her performance. Overnight, her Twitter followers increased almost six times and her social feed was filled with appreciation from all over the country.

I earned it.
Worked every bit for it. pic.twitter.com/sGZRL9GWMu

There are six classes depending on the type and severity of impairment: