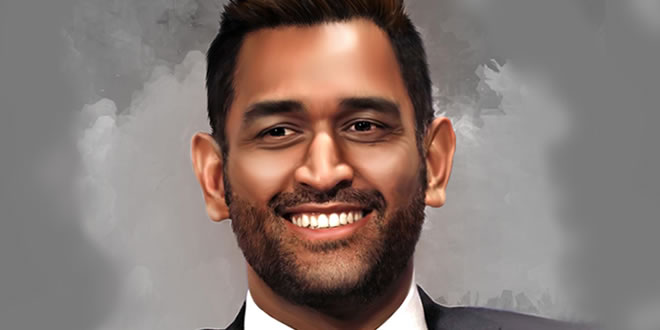 Mahendra Singh Dhoni is an Indian cricketer born on 7th July 1981 in Ranchi, Bihar (now Jharkhand). Dhoni is a right-handed batsman whose primary role as a batsman is to finish the innings and also keeps wickets.

Dhoni is one of the most successful captains of Indian cricket. He is the only captain in the world to have won all the ICC trophies.

Initially recognized as an extravagantly flamboyant and destructive batsman, Dhoni has come to be regarded as one of the coolest heads to captain the Indian ODI side. Under his captaincy, India won the 2007 ICC World Twenty20, CB Series of 2007–08, and the Border-Gavaskar Trophy 2008 in which they beat Australia 2–0. He also captained Chennai Super Kings to victory in the recent IPL 2010. He is now captain of India in all three forms of the game and also led the team to their first ever bilateral ODI series wins in Sri Lanka and New Zealand. Dhoni also led team India to number one position in ICC rankings in test cricket for the first time. Dhoni has also been the recipient of many awards including the ICC ODI Player of the Year award in 2008 and 2009 (the first Indian player to achieve this feat), the Rajiv Gandhi Khel Ratna award and the Padma Shri, India’s fourth highest civilian honour in 2009. As of January 2010, Dhoni is the highest ranked ODI batsman on the ICC Rankings List. Dhoni was named as captain of Wisden’s first-ever Dream Test XI Team in 2009 and has topped the list of world’s top 10 earning cricketers compiled by Forbes. He was named as the captain of ICC World Test and ICC ODI teams for 2009.

Dhoni was born in Ranchi, the state capital of Jharkhand on the 7th of July 1981, and was brought up in the same city. His parents originally hailed from a village in Uttarakhand. In his childhood Dhoni played Badminton and Football, and was sent by his Football coach to play Cricket. He began the journey as the wicketkeeper at the Commando Cricket Club in the year 1995, and was selected for the Under-16 Vinoo Mankad Trophy in the year 1997-98.

In his 5th One Day International (ODI) Cricket match against Pakistan, Dhoni scored 148 runs which was the biggest score made by an Indian wicket-keeper till then. He managed to accomplish this score just off 123 balls in the match played at Vishakhapatnam on the 5th of April 2005. Later the same year, he scored 183 not out against Sri Lanka in the Bi-lateral One Day International (ODI) Series, outclassing his own record. This match was played at Jaipur and India had to outsmart a huge 299 runs score set by the Sri Lankans. Dhoni got India this great victory with his wonderful 183 runs within just 145 balls. This score set a yet another record for being the highest score made in the second innings of a One Day International (ODI) Cricket match, and still lies unbeaten by any other batsman. At the end of the Series, Dhoni finished with highest total score of 346 runs and grabbed the coveted Man of the Series award.

He scored good number of runs in a consistent manner for a period of time, and soon grabbed the No. 1 position in the One Day International (ODI) Cricket rankings issued by International Cricket Council (ICC) in the year 2005-06.

The Low Down Phase

The Indian Cricket team lost its grip during the year 2006-07, as the team lost in the DLF Cup 2006-07, and again in the 2006 ICC Champions Trophy. Although, Dhoni tried to maintain his record a bit by half century against West Indies. This was a low phase both for the Indian Cricket team and Dhoni, as the wicket-keeper batsman could just score 139 runs in the 4 matches during the One Day International (ODI) Cricket Series against South Africa, and the Indian team lost the Series to South Africa by 0-4.

Again, in the 2007 Cricket World Cup, India badly lost to Bangladesh and Sri Lanka and was ousted from the tournament. In both the matches, Dhoni lost at duck (0 runs), and scored a total of 29 runs in the whole tournament.

The Fighter Bounces Back

But he soon emerged as a winner again after the World Cup nightmare, and scored 91 runs not against Bangladesh in a Series later and 174 runs in 3 matches during the Afro-Asia Cup with an average of 87.00 runs.

He was named the Vice Captain of the Indian One Day International (ODI) Cricket team during a Series against South Africa in Ireland, and the Captain of the team during the Twenty-20 Cricket World Cup played in September 2007. On 24th of September 2007, Dhoni got India its second World Cup victory in the breath-taking finals against Pakistan, and equaled the rare feat of leading India to a World Cup Cricket Trophy achieved by Kapil Dev in the year 1983.

10 Dhoni quotes which will bring smile on your face

The Former Indian captain, Mahendra Singh Dhoni – champion wicket-keeper batsman is not only famous for hitting huge sixes or winning ICC trophies for India but also famous for his witty one-liners in a press conference or post-match presentation.

Here we are presenting 10 most famous quotes of Mahendra Singh Dhoni.