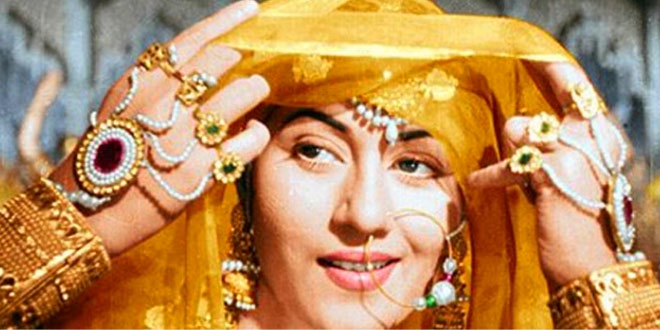 Madhubala (February 14, 1933 – February 23, 1969) is considered one of the most beautiful actresses to have graced the screens of Bollywood.

Madhubala was born as Mumtaz Jehan Begum Dehlavi in Delhi as the 5th child into a poor, conservative Pashtun Muslim family of 11 children. A Muslim Holy Man is said to have predicted that the young Mumtaz would earn fame and fortune but would lead an unhappy life and die at a young age. Madhubala, with literal meaning of her name being damsel of honey has continued to be considered with utmost admiration, with multiple generation of Hindi movie goers even today. Her father, Ataullah Khan was a coachman in Delhi, who migrated to Bombay remembering the holy man’s words and also in search for a better livelihood. They struggled for over a year and Mumtaz entered Bollywood as a child-artist under the name Baby Mumtaz.

Her first film was Basant (1942). Devika Rani was impressed by her performance and changed her name to Madhubala who was to appear in Jwar Bhata (1944) in which Dilip Kumar was playing the lead role. She was unable to work in the film, but this was when Madhubala first set eyes on Dilip Kumar. Mohan Sinha, a Producer-Director taught her to drive at the age of twelve.

Her big break came when Kidar Sharma gave her a chance to act opposite Raj Kapoor in Neel Kamal (1947). Madhubala had finally arrived on the Indian screen. Over the next two years she had blossomed into a captivating beauty (fans referred to her as the “Venus of the Screen”). In 1949, Madhubala starred in Bombay Talkies production Mahal. The film became a super hit. The song Aayega Aanewaala made the careers of Madhubala as well as the playback singer Lata Mangeshkar.

Many other hits followed Mahal with a spate of films opposite the leading men of the day- Ashok Kumar, Rehman, Dilip Kumar, and Dev Anand, but by the mid-1950s, some of her films flopped. But she silenced her critics in 1958, when four of her films turned out to be superhits – Phagun opposite Bharat Bhushan, Howrah Bridge opposite Ashok Kumar, Kala Pani opposite Dev Anand and Chalti ka Naam Gaadi opposite her husband-to-be, Kishore Kumar.

Critics said that Madhubala’s beauty was greater than her acting ability, but this was in part due to unwise choices on her part and on that of her father, who was her manager. She was the sole support of a large and desperately poor family, and seemed to take on any role she could get, even if her credibility as a serious actress was compromised.

Madhubala was proposed by three men and turned to Nargis who was a close friend for advice. Nargis suggested that Bharat Bhushan would respect her as he was a widower whereas Pradeep Kumar and Kishore Kumar were already married. However she had already made up her mind on Kishore Kumar as he was like a breath of fresh air in her life.

She accepted as he was the first man who came into her life on the rebound whilst shooting Chalti Ka Naam Gadi and Jhumroo. Her father had informed Kishore that Madhubala would be flying to London for a complicated operation and he could marry her on her return but Kishore knew she wanted to get married before she died and he wanted to fulfill her desire.

They had a civil ceremony. His parents refused to attend the wedding and never really accepted Madhubala as they thought she had broken their sons marriage. When Madhubala went to touch her father-in-law’s feet he moved away. Madhubala and Kishore also had a Hindu ceremony to please his parents but they were still not happy. This was all in 1960, the year they were married.

In 1960, it was Mughal-e-Azam that marked one of her greatest performances as the doomed courtesan Anarkali Wali. Sadly, being plagued with a persistent heart disease, she was confined to bed for the last nine years of her life. She did have the odd release in this period like Passport (1961), Jhumroo (1961), Boy Friend (1961), Half Ticket (1962) and Sharabi (1964), but they were mostly old films that managed to limp towards release. In fact, Jwala, was released in 1971, two years after her death. She died as one of the most beautiful and most charming women on the Indian cinema.

Madhubala’s heart problem was discovered in a routine check-up in 1950 when heart surgery was not available. She had to put on a brave face and her illness was kept a secret from the industry for many years. She frequently used to cough up blood on the sets. She moved back to her bungalow a couple of weeks or so later because her in-laws’ attitude was upsetting her. She realized she had made a mistake in marrying Kishore. The doctors in London refused to operate on Madhubala as they thought she would die during the operation and if she did survive, it would only be for a year.

She tried making a comeback opposite Raj Kapoor in Chalack (1964), but she collapsed on the first day of shooting and the film was shelved. Her illness eventually claimed her life in 1969, after she suffered from a hole in her heart. She was buried with her diary at Santacruz Burial Ground by her family and Kishore Kumar. In this short life, she made over 70 films, and to this day remains one of the most enduring legends of Indian cinema.