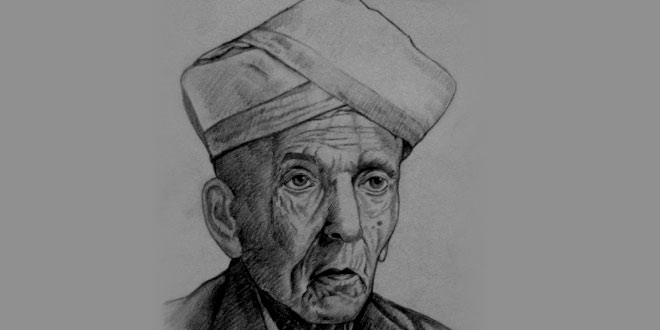 Sir Mokshagundam Visvesvaraya was an eminent engineer and statesman and played a key role in building of modern India.

Sir Mokshagundam Visvesvaraya was born on September 15, 1860 in Muddenahalli village in the Kolar district of the erstwhile princely state of Mysore (present day Karnataka). His father Srinivasa Sastry was a Sanskrit scholar and Ayurvedic practitioner. His mother Venkachamma was a religious lady. He lost his father when he was only 15 years old.

Visvesvaraya completed his early education in Chikkaballapur and then went to Bangalore for higher education. He cleared his B.A. Examination in 1881. He got some assistance from the Government of Mysore and joined the Science College in Poona to study Engineering. In 1883 he ranked first in the L.C.E. and the F.C.E. Examinations (equivalent to B.E. Examination of today).

When Sir M. Visvesvaraya cleared his engineering, Government of Bombay offered him a job and appointed him Assistant Engineer at Nasik. As an engineer, he achieved some marvelous feats. He planned a way of supplying water from the river Sindhu to a town called Sukkur. He devised a new irrigation system called the Block System. He devised steel doors to stop the wasteful flow of water in dams. He was the architect of the Krishnaraja Sagara dam in Mysore. The list is endless.

Sir M. Visvesvaraya lead a very simple life. He was a strict vegetarian and a teetotaler. He was known for his honesty and integrity. In 1912, Maharaja of Mysore appointed Visvesvaraya as his Dewan. Before accepting the position of Dewan of Mysore, he invited all his relatives for dinner. He told them very clearly that he would accept the prestigious office on the condition that none of them would approach him for favors. As Dewan of Mysore, he worked tirelessly for educational and industrial development of the state. When he was Dewan many new industries came up. The Sandal Oil Factory, the Soap Factory, the Metals Factory, the Chrome Tanning Factory, were some of them. Of the many factories he started the most important is the Bhadravati Iron and Steel Works.

Some of the honors and laurels conferred on Sir M. Visvesvaraya

Previous In software engineering, what does workflow mean?
Next World Ozone Day Information For Students