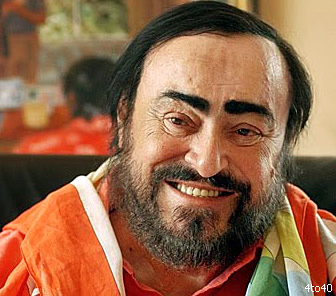 Luciano Pavarotti (12 October 1935 – 6 September 2007) was an Italian operatic tenor, who also crossed over into popular music, eventually becoming one of the most commercially successful tenors of all time. He made numerous recordings of complete operas and individual arias, and established himself as one of the finest tenors of the 20th century. He was one of The Three Tenors and became well known for his televised concerts and media appearances. Pavarotti was also noted for his charity work on behalf of refugees and the Red Cross, amongst others.

Pavarotti began his professional career as a tenor in 1961 in Italy. That same year, he made his first international appearance in La traviata in Belgrade, Yugoslavia. He sang in opera houses in addition to Italy, in the Netherlands, Vienna, London, Ankara, Budapest and Barcelona. The young tenor earned valuable experience and recognition while touring Australia at the invitation of soprano Joan Sutherland in 1965. He made his United States debut in Miami soon afterwards, also on Sutherland’s recommendation. His position as a leading lyric tenor was consolidated in the years between 1966 and 1972, during which time he first appeared at Milan’s La Scala and other major European houses. In 1968, he debuted at New York City’s Metropolitan Opera as Rodolfo in Puccini’s La bohème. At the Met in 1972, in the role of Tonio in Donizetti’s La fille du régiment he earned the title “King of the high Cs” when he sang the aria “Ah mes amis …pour mon ame”. He gained worldwide fame for the brilliance and beauty of his tone, especially into the upper register. He was at his best in bel canto operas, pre-Aida Verdi roles and Puccini works such as La bohème, Tosca and Madama Butterfly. The late 1970s and 1980s saw Pavarotti continue to make significant appearances in the world’s foremost opera houses.

Celebrity beyond the world of opera came to Pavarotti at the 1990 World Cup in Italy with performances of Puccini’s “Nessun dorma”, from Turandot, and as one of The Three Tenors in their famed first concert held on the eve of the tournament’s final match. He sang on that occasion with fellow star tenors Placido Domingo and José Carreras, bringing opera highlights to a wider audience. Appearances in advertisements and with pop icons in concerts furthered his international celebrity.

His final performance in an opera was at the Metropolitan Opera in March 2004. Later that year, the National Italian American Foundation (NIAF) inducted him into its Italian American Hall of Fame in recognition of his lifetime of work. During a ceremony held at the Foundation’s Anniversary Gala just four days after his 69th birthday, singer Faith Hill presented Pavarotti with a birthday cake and sang “Happy Birthday” to the opera legend.

The 2006 Winter Olympics in Turin, Italy, saw Pavarotti on stage for the last time, where he performed “Nessun dorma”, with the crowd serving as the aria’s chorus, and he received a thunderous standing ovation.

He died from pancreatic cancer on 6 September 2007.

Luciano Pavarotti was born in 1935 on the outskirts of Modena in Northern Italy, the son of Fernando Pavarotti, a baker and amateur tenor, and Adele Venturi, a cigar factory worker. Although he spoke fondly of his childhood, the family had little money; its four members were crowded into a two-room apartment. According to Pavarotti, his father had a fine tenor voice but rejected the possibility of a singing career because of nervousness. World War II forced the family out of the city in 1943. For the following year they rented a single room from a farmer in the neighbouring countryside, where the young Pavarotti developed an interest in farming.

After abandoning the dream of becoming a football goalkeeper, Pavarotti spent seven years in vocal training. Pavarotti’s earliest musical influences were his father’s recordings, most of them featuring the popular tenors of the day – Beniamino Gigli, Giovanni Martinelli, Tito Schipa and Enrico Caruso. Pavarotti’s favourite tenor and idol was Giuseppe Di Stefano. He was also deeply influenced by Mario Lanza, saying, “In my teens I used to go to Mario Lanza movies and then come home and imitate him in the mirror”. At around the age of nine he began singing with his father in a small local church choir.

After what appears to have been a normal childhood with a typical interest in sports — in Pavarotti’s case football above all, he graduated from the Scuola Magistrale and faced the dilemma of a career choice. He was interested in pursuing a career as a professional football goalkeeper, but his mother convinced him to train as a teacher. He subsequently taught in an elementary school for two years but finally allowed his interest in music to win out. Recognising the risk involved, his father gave his consent only reluctantly.

Pavarotti began the serious study of music in 1954 at the age of 19 with Arrigo Pola, a respected teacher and professional tenor in Modena who offered to teach him without remuneration. Not until he began these studies was Pavarotti aware that he had perfect pitch.

In 1955, he experienced his first singing success when he was a member of the Corale Rossini, a male voice choir from Modena that also included his father, which won first prize at the International Eisteddfod in Llangollen, Wales. He later said that this was the most important experience of his life, and that it inspired him to become a professional singer. At about this time Pavarotti first met Adua Veroni. They married in 1961.

When his teacher Arrigo Pola moved to Japan, Pavarotti became a student of Ettore Campogalliani, who at that time was also teaching Pavarotti’s childhood friend, Mirella Freni, whose mother worked with Luciano’s mother in the cigar factory. Like Pavarotti, Freni was destined to operatic greatness; they were to share the stage many times and make memorable recordings together.

During his years of musical study, Pavarotti held part time jobs in order to sustain himself – first as an elementary school teacher and then as an insurance salesman. The first six years of study resulted in only a few recitals, all in small towns and without pay. When a nodule developed on his vocal cords, causing a “disastrous” concert in Ferrara, he decided to give up singing. Pavarotti attributed his immediate improvement to the psychological release connected with this decision. Whatever the reason, the nodule not only disappeared but, as he related in his autobiography, “Everything I had learned came together with my natural voice to make the sound I had been struggling so hard to achieve”.

On 13 December 2003, he married his former personal assistant, Nicoletta Mantovani (born 1969), with whom he already had a daughter, Alice. A second child, Riccardo, did not survive, because of complications at the time of birth in January 2003. Pavarotti is also survived by three other daughters by his first wife Adua, to whom he was married for 34 years: Lorenza, Cristina, and Giuliana. At the time of his death, he had one granddaughter.