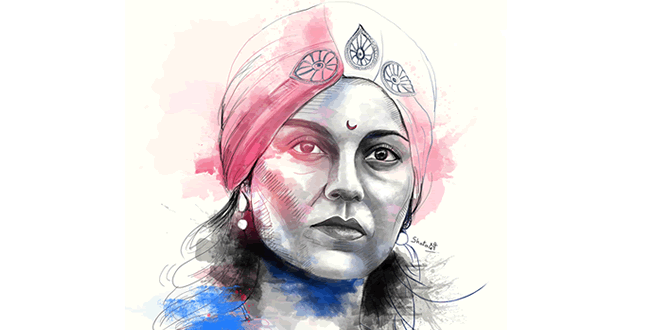 Kangana Ranaut is an Indian film actress, who worked predominantly in Bollywood and is one of the highest-paid actresses in India. She was born on 23 March 1986 at Bhambla, a small town in the Mandi district of Himachal Pradesh, into a Rajput family. She completed her schooling from DAV model school Sector 15 in Chandigarh. She later joined Government Art College for pursuing her higher studies.

Kangana started her career from theatre in Delhi with Asmita Theatre Group. Arvind Gaur trained her who was a theatre director. She played her first play with Arvind Gaur named Taledanda.

Then Ranaut joined Asha Chandra’s course in 2004 to get ready for Bollywood. After that she came to Mumbai to try her luck in movies. In September 2005, Anurag Basu saw her at a cafe in Mumbai, and offered her the lead role for his movie Gangster. It became a success at the box office. Then she did a film Woh Lamhe.

Ranaut lives in Mumbai with her sister Rangoli, who was the victim of an acid attack in 2006. She makes yearly visits to her hometown of Bhambla. A practicing Hindu, Ranaut follows the teachings of the spiritual leader Swami Vivekananda and considers meditation to be “the highest form of worshiping God”.

She practices vegetarianism and was listed as “India’s hottest vegetarian” in a poll conducted by PETA in 2013. Since 2009, Ranaut has been studying the dance form of Kathak from the Nateshwar Nritya Kala Mandir.

She has said that the technical process of filmmaking is of tremendous interest to her, and to better her understanding of it Ranaut enrolled in a two-month screenplay writing course at the New York Film Academy in 2014. In an interview with Filmfare she said that despite her stardom, she wants to lead a normal life: “I don’t want to lose my rights as a common person to learn and grow”.

She is the recipient of several awards, including three National Film Awards and Filmfare Awards in four categories.

Previous The Lion King: 2019 Hollywood Photorealistic Computer-animated Musical Film
Next Woman Boards Luggage Belt Assuming It Would Take Her To The Plane