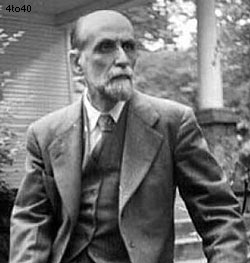 Juan Ramon Jimenez was a Spanish poet. One of his most important contributions to modern poetry was the idea of ‘poesia pura’ (Spanish for ‘pure poetry’). A prolific author, he received the Nobel Prize in Literature in 1956.

Strongly influenced by the poet Ruben Dario, he published his first two books, in 1900, at the age of eighteen. The death of his father in this same year affected him deeply, and the resulting depression led to his being sent to a mental institution in France. Ten years later, he was transferred to the Sanatorio de El Rosario in Madrid. At another stage, Jimenez was hospitalized for eight months due to another deep depression. Ramon Jimenez later became a Professor of Spanish Language and Literature at the University of Maryland at College Park. In 1956, he received the Nobel Prize in Literature.

In the ‘20s, Jimenez became the acknowledged master of the new generation of poets. He was active as a critic as well as an editor of literary journals. In 1930 he retired to Seville to devote himself to the revision of his earlier work. Six years later, as the result of the Spanish Civil War, he left Spain for Puerto Rico and Cuba. He remained in Cuba for three years and, in 1939, went to the United States, which became his residence until 1951, when he moved definitely to Puerto Rico. During these years Ramon taught at various universities and published Spaniards of Three Worlds, a book of prose portraits, and several collections of poems, among them Voices of My Song and Animal of Depth.

Jimenez was acutely aware of the difficulties involved in conceiving of ‘the self’. “Through work we define ourselves, and upon our work we leave our image. It is part of who we are, and who we shall become,” he said. One of Juan Ramon’s best-known works in progress was his I, his public self. Over the years, in a series of vignettes and aphorisms, he portrayed himself as god, as nature, as his own disciple and master; in short, as a sufficient, alternate universe. Like his poetry, that I, that public ego, was in a constant state of revision. In his earliest poses for the photographer, one sees the sad, dark eyes of a self-declared ‘martyr of beauty’.