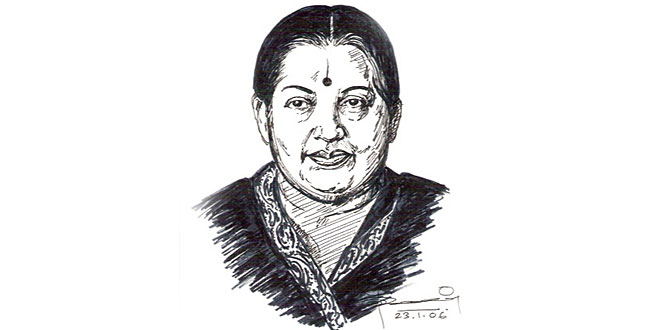 Jayalalithaa Jayaram is one of those few former iconic superstars who have not only attained a legendary status in the realms of cinema, but also continue to supersede other influential public figures in the state politics of Tamil Nadu. Over the years, her transition from a popular actress to Tamil Nadu’s most powerful women politician has been a phenomenal as compared to her peers. Being the first women to be elected as an opposition leader in 1989, Jayalalithaa continues to hold a firm reins over the current political scenario in the state. In 2011, she was elected as Chief Minister of Tamil Nadu for the third time by the people and continues to undertake many welfare projects for the state. During her previous tenures, she has contributed in many ways from rain harvesting project to development of the industrial sector and has strived for many constructive changes. For the number of years she served as a public figure, she has been recipient of many honoraries presented by several prestigious institutions of the state. The article below provides you insightful details on her life and career.

Komalavalli, better known as Jayalalithaa, was born in Mysore to Vedavalli and Jayaram. Her family bloodline can be traced back to the royal Mysore family. Apparently, her grandfather served as the royal physician in the Mysore court and he made it customary to add the prefix Jaya to the names of his family members to mirror their social connection with King Jayachamarajendra Wodeyar of Mysore. Jayalalithaa lost her father at a young age of two. Thereafter, she moved to Bangalore to live with her mother and maternal grandparents. During her short stay in Bangalore, she studied at Bishop Cotton Girls’ High School for a few years before her mother moved to Chennai to try her luck on the silver screen. In Chennai, she pursued her education at Church Park Presentation Convent and later attended Stella Maris College, Chennai. Since her childhood, Jayalalithaa was a bright student and intended to study law, but fate had other plans for her. Due to financial constrains in the family, her mother insisted that she take up film offers. At the age of 15 years, she debuted as a leading protagonist and that was the beginning to her glorious film career.

She commenced her acting career with an English film titled “Epistle” by Shankar V. Giri. However, it failed to win her any appreciation. It was not until her debut venture in 1964 that Jayalalithaa found her way into the heart of her fans. Jayalalithaa’s first Indian film was a Kannada movie named “Chinnada Gombe” that was released in 1964. The film got great reviews and was applauded by audiences. A year later, she began her acting career in Tamil films with “Vennira Aadai”. Soon after, she made an appearance in Telugu cinema. In the following years, she doled out several knockout performances in Tamil films that did well at the box offices. Her on-screen pairing with actor M. G. Ramachandran was a big success and was well liked by her aficionado. During the latter half of her career, she acted with heroes like Jaishankar, Ravichandran and Sivaji Ganesan. In 1968, she appeared in a mainstream Hindi film named “Izzat” starring Dharmendra. By 1980, her film career came to an end with, “Nadhiyai Thedi Vandha Kadal” being her last motion picture before she joined politics.

In the same year, M. G. Ramachandran, the founder member of AIADMK appointed her as the Propaganda Secretary. Four years later, she was designated to the Rajya Sabha that evidently paved her way to the Indian Parliament. She soon became actively implicated as a member of AIADMK political party. She was seen as political partisan of MGR and the media projected her as the future heir to AIADMK party. During his tenure, M. G. Ramachandran served as a Chief Minster, while Jayalalithaa played a vigorous role as a secretary of his political party. After his death, Janaki Ramachandran was nominated by few members of the party as a future leader of AIADMK. The party was split in two – one led by Jayalalithaa and the other by Janaki Ramachandran. However, in 1988 her party was dismissed under Article 356 of the Constitution of India. By 1989, the AIADMK party unified, making Jayalalithaa the chief head. Since then she has won the state assembly elections thrice, once in 1991, 2002 and again in 2011, despite of several allegations and controversies.