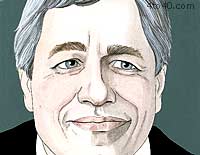 James L. “Jamie” Dimon (born March 13, 1956) is the current CEO and chairman of JPMorgan Chase & Co as well as a Class A director of the Board of Directors of the New York Federal Reserve, a three year term which started January 2007. Dimon was named to Time Magazine’s 2006, 2008 and 2009 lists of the world’s 100 most influential people.

James “Jamie” Dimon was born in New York City, to Theodore and Themis Dimon, and attended Browning School. His grandfather, a Greek immigrant from Asia Minor, was a broker and passed on his knowledge of the business to his son and partner, Theodore. They worked together for 19 years, and Jamie held summer jobs at their New York office. Later, he majored in psychology and economics at Tufts University, before earning an M.B.A. degree from Harvard Business School along with classmates Jeffrey Immelt and Seth Klarman. Upon his graduation in 1982, Sandy Weill convinced him to turn down offers from Goldman Sachs, where he worked the previous summer, and Morgan Stanley to join him as an assistant at American Express. In 1994 he was inducted into the Browning School’s Athletic Hall of Fame.

Although Weill could not offer the same amount of money as the investment banks, Weill promised Dimon that he would have “fun”. In a power struggle, Weill left American Express in 1985 and Dimon followed him. The two then took over Commercial Credit, a consumer finance company, from Control Data, which became the vehicle that Dimon and Weill would use to propel themselves to the top of the financial world. Through a series of unprecedented mergers and acquisitions, in 1998 Dimon and Weill were able to form the largest financial services conglomerate the world had ever seen, Citigroup.

Dimon left Citigroup in November 1998. It was rumored at the time that he and Weill got into an argument in 1997 over the perceived lack of promotion given by Dimon to Weill’s daughter, Jessica M. Bibliowicz. In his 2005 University of Chicago Graduate School of Business Fireside Chat and 2006 Kellogg School of Management interviews, Dimon stated that he was fired by Weill.

In March 2000 Dimon became CEO of Bank One, then the nation’s fifth largest bank. He became president of J.P. Morgan Chase in mid-2004 when it acquired Bank One.

In March 2008 he was a board member of the New York Federal Reserve Bank and CEO of J.P. Morgan and made decisions in connection with the $55 billion loan to J.P. Morgan to bail out Bear Stearns.

Following the acquisition of Washington Mutual by JPMorganChase, President Barack Obama had this to say about Dimon’s handling of the real-estate crash, credit crisis, and the banking collapse affecting corporations nationwide, including major financial institutions like Bank Of America, Citibank, and Wachovia:”You know, keep in mind, though there are a lot of banks that are actually pretty well managed, JPMorgan being a good example, Jamie Dimon, the CEO there, I don’t think should be punished for doing a pretty good job managing an enormous portfolio.”

During the 2008-2009 presidential process, there was some speculation that Dimon would serve in the Obama Administration as United States Secretary of the Treasury. Obama eventually named President of the Federal Reserve Bank of New York Timothy Geithner to the position.

Under Dimon’s leadership with the acquisitions on his watch, JPMorganChase has now become the leading U.S. bank in domestic assets under management, market capitalization value, and publicly traded stock value. JPMorganChase is also the #1 credit card provider in the United States.

In 2009, Mr. Dimon was considered one of “The TopGun CEOs” by Brendan Wood International, an advisory agency.

As JPMorgan Chase’s Chairman, President & CEO, Dimon oversaw the transfer of $25 billion from the US Treasury Department to JPMorgan Chase on October 28, 2008 via the Troubled Asset Relief Program (TARP). This was the fifth largest amount transferred under Section A of TARP to help troubled assets related to residential mortgages.

JPMorgan Chase advertised in February 2009 that they would be using their capital base monetary strength to acquire new businesses, primarily due to the funds provided by TARP and in direct violation of TARP’s main intent; to help troubled assets related to residential mortgages and all obligations as spelled out in TARP.

The US Government, as of February 2009, had yet to move forward in enforcing TARP’s intent in funding JP Morgan Chase with $25,000,000,000. of the US’s nine largest banks, JPMorgan Chase was arguably the second healthiest bank, and did not need to take TARP funds (the other was Wells Fargo). In order to encourage smaller banks with troubled assets to accept this money, Treasury Secretary Henry Paulson allegedly coerced the CEOs of the other seven largest banks to accept TARP money under short notice.

Relations with the Obama Administration

Dimon is a Democrat and worked in President Obama’s adopted hometown of Chicago. After Obama took office and JPMorgan Chase repaid its bailout money more quickly than most, he became influential in the White House. Dimon was one of three CEO’s found by the Associated Press-along with Lloyd Blankfein and Vikram Pandit-to have had liberal access to United States Secretary of the Treasury Timothy Geithner in the seven months after the financial crisis in fall 2008.

Dimon is married to Judith Kent; they have three children: Julia, Laura, and Kara Leigh. Outside of his duties to JPMorgan Chase in New York, Jamie also owns a mansion in Chicago’s Gold Coast neighborhood.