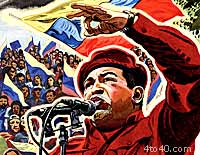 Hugo Rafael Chávez Frías was born on July 28, 1954 in the home of his paternal grandmother Rosa Inéz Chávez in the rural village of Sabaneta, Barinas State. His parents, Hugo de los Reyes Chávez and Elena Frías de Chávez, were working-lower middle class schoolteachers who lived in the small village of Los Rastrojos. The Chávez family were of mixed Amerindian, Afro-Venezuelan, and Spanish descent. They lived in poverty, and as such Hugo and his brother Adán lived with their grandmother Rosa. Hugo attended the Julián Pino Elementary School, where his various hobbies included drawing, painting, baseball and the study of history was served. In the mid 1960s, Hugo, his brother and their grandmother moved to the city of Barinas so that they could attend the only high school in the rural state, the Daniel O’Leary High School. He is the 56th President of Venezuela.

At the age of seventeen, Chávez decided to study at the Venezuelan Academy of Military Sciences in Caracas. After becoming dissatisfied with the Venezuelan puntofijismo political system which he viewed as corrupt and undemocratic, he founded the secretive Revolutionary Bolivarian Movement-200 (MBR-200) in the early 1980s to work towards overthrowing it. After the Democratic Action government of President Carlos Andrés Pérez ordered the violent repression of protests against spending cuts, Chávez led the MBR-200 in an unsuccessful coup d’état against the government in 1992.

After getting out of prison in two years, he founded a political party, the Fifth Republic Movement, and was elected president of Venezuela in 1998. He subsequently introduced a new constitution which guaranteed rights for women and indigenous peoples, and was re-elected in 2000. During his second presidential term, he introduced a system of Bolivarian Missions, Communal Councils and worker-managed cooperatives, whilst also nationalising various key industries. The opposition movement meanwhile attempted to remove him from power both through an unsuccessful military coup in 2002 and a recall referendum in 2003, believing that he was eroding representative democracy. He was again elected into power in 2006, following which he founded a new political party, the United Socialist Party of Venezuela (PSUV), in 2007.

He is a vocal critic of capitalism and in particular neoliberalism, he has been a prominent opponent of the United States foreign policy. He has supported Latin American and Caribbean cooperation and was instrumental in setting up the pan-regional Union of South American Nations, the Bolivarian Alliance for the Americas, the Bank of the South, and the regional television network TeleSur. His political influence in Latin America led Time magazine to include him among their list of the world’s 100 most influential people in both 2005 and 2006. In a 2006 list compiled by the British magazine New Statesman, he was voted eleventh in the list of “Heroes of our time”. In 2010 the magazine included Chávez in its annual The World’s 50 Most Influential Figures. His biographers Marcano and Tyszka believed that within only a few years of his presidency, he “had already earned his place in history as the president most loved and most despised by the Venezuelan people, the president who inspired the greatest zeal and the deepest revulsion at the same time.”

Chávez has been married twice. He first wedded Nancy Colmenares, a woman from a poor family originating in Chávez’s hometown of Sabaneta. Chávez and Colmenares remained married for 18 years, during which time they had three children: Rosa Virginia, María Gabriela, and Hugo Rafael. They separated soon after Chávez’s 1992 coup attempt. During his first marriage, Chávez also had an affair with historian Herma Marksman, their relationship lasted for nine years. Chávez is divorced from his second wife, journalist Marisabel Rodríguez de Chávez. Through that marriage, Chávez had another daughter, Rosinés. Chávez has two grandchildren. Chávez was raised a Roman Catholic, although he has had a series of disputes with both the Venezuelan Catholic hierarchy and Protestant groups like the New Tribes Mission. He describes himself as a Christian who grew up expecting to become a priest.