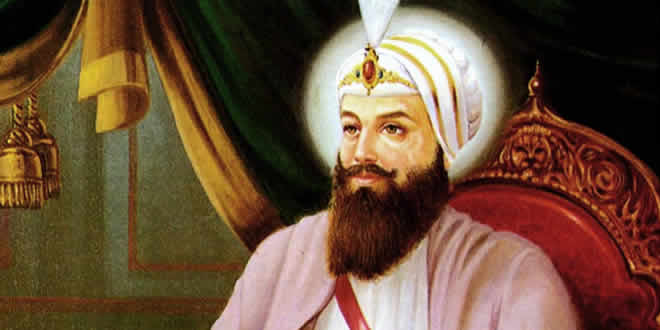 Guru Har Rai was the seventh of the Ten Gurus of Sikhism and became Guru on Tuesday, 19 March, 1644 following the footsteps of his grandfather, Guru Har Gobind Ji. Before Guru Ji died, he nominated Guru Har Krishan Ji, his son, as the next Guru of the Sikhs. The following is a summary of the main highlights of Guru Ji’s life:

Although, Guru Har Rai Ji was a man of peace, he never disbanded the armed Sikh Warriors (Saint Soldiers), who earlier were maintained by his grandfather, Guru Hargobind. He always boosted the military spirit of the Sikhs, but he never himself indulged in any direct political and armed controversy with the contemporary Mughal Empire. Once on the request of Dara Shikoh (the eldest son of emperor Shahjahan), Guru Sahib helped him to escape safely from the bloody hands of Aurangzeb’s armed forces during the war of succession.

Once Guru Sahib was coming back from the tour of Malwa and Doaba regions, Mohamad Yarbeg Khan, (son of Mukhlis Khan, who was killed by Guru Hargobind in a battle) attacked the kafla of Guru Sahib with a force of one thousand armed men. The unwarranted attack was repulsed by a few hundred Saint Soldiers of Guru Sahib with great courage and bravery. The enemy suffered a heavy loss of life and fled the scene. This self-defense measure, (a befitting reply to the unwarranted armed attack of the privileged Muslims), was an example for those who professed the theory of so called non-violence or “Ahimsa Parmo Dharma”. Guru Sahib often awarded various Sikh warriors with gallantry awards.

Guru Sahib also established an Aurvedic herbal medicine hospital and a research centre at Kiratpur Sahib. There also he maintained a zoo. Once Dara Shikoh, the eldest son of Shahjahan fell seriously ill by some unknown disease. The best physicians available in the country and abroad were consulted, but there was no improvement. At last the emperor made a humble request to Guru Sahib for the treatment of his son. Guru Sahib accepting the request, handed over some rare and suitable medicines to the messenger of the emperor. The life of Dara Shikoh was saved from the cruel jaws of death. The emperor, whole heartily thanked and wanted to grant him some “Jagir”, but Guru Sahib never accepted.

Suthre Shah was born in sampat 1672, in the village of Berampur in the house of Nanda Khatri. He was born with a full set of teeth, his father after consulting the pundits and astrologers, placed the child outside the house, leaving him to and uncertain fate (most likely death), but it just so happened that Sri Guru Hargobind Sahib ji, on his way back from Kashmir, saw the abandoned infant and took pity on him and he order his sikhs to carry the child with them, it was Guru Hargobind sahib ji who named the child ‘Suthra’.

Guru Har Rai Sahib faced some serious difficulties during the period of his guruship. The corrupt massands, Dhir Mals and Minas always tried to preclude the advancement of the Sikh religion.

One day the Sikhs asked the Guru whether those who read the Gurus’ hymns without understanding them derived any spiritual advantage from it. The Guru gave no reply at the time, and next morning went hunting. En route, the Guru came across a broken pot which had held butter. The rays of the sun were melting the butter on the broken pot fragments. The Guru took one of these fragments in his hand and said, “Look my Sikhs, broken pot shards – when they are heated, the butter that adhered to them readily melts. As the grease adheres to the potsherds, so to do the Gurus’ hymns to the hearts of his Sikhs. At the hour of death the Gurus’ instruction shall assuredly bear fruit. Whether understood or not, it has within it the seed of salvation. Perfume still clings to a broken vase.” The meaning of the parable is that whosoever daily reads the Gurus shabads shall assuredly obtain peace. And even though he may not fully understand them, God will undoubtedly assist him.

A devout Sikh called Bhai Gonda used to stay with the Guru. He was a saint in thought, word and deed. Guru ji was very much pleased with his sincere devotion and asked, “Bhai Gonda, go to Kabul, and instruct the Sikhs there in the worship of the true Name, and preach the Sikh faith. Feed holy men and pilgrims with the offerings you receive and send whatever remains here for the upkeep of the Langar. These are to be your duties, and I am confident that you will succeed in them.”

Although Kabul was a foreign country and there was danger from Muslim bigotry in living there, Bhai Gonda cheerfully accepted the task given to him. On arriving there he built a Gurdwara and carried out all the Guru’s instructions.

One day, while Bhai Gonda was repeating the Japji, he felt as if he was actually clinging to the Guru’s feet. He was in such a state of abstraction that he became quite unconscious. He grew as absorbed in the sight of the Guru as a drop of rain in the ocean. The Guru knew what was passing through Bhai Gonda’s mind, and sat firmly on his throne keeping his feet together. At mid-day, when dinner was announced, the Guru made no response. When the announcement was repeated an hour later, he still remained silent. A longer interval later, the call was again made for the third time and cook asked permission to serve the food, but again the Guru did not speak. Several Sikhs gathered together and were about to make a representation to the Guru, when he finally spoke. “Brother Sikhs. Bhai Gonda is in Kabul. He is in thought, word, and deed, a saint of the Guru. He today clasped my feet. How can I take them away from him? How can I go take my dinner until he lets go? I am therefore waiting until the conclusion of his meditation and obeisance.” Bhai Gonda did not awake from his trance before twilight, and it was only then that the Guru felt free to take his meal.

The Emperor Shah Jahan had four sons by different wives: Dara Shikoh, Shuja Muhammad, Aurangzeb and Murad Baksh. Dara Shikoh was the heir-apparent, and was very dear to his father. Aurangzeb was very cunning, clever and ambitious, and was fixated on succeeding to the throne. (The name Aurangzeb means – fit for the throne) He administered tiger’s whiskers in a dish to his eldest brother and he became dangerously ill as a result. Astrologers were sent for, pirs and fakirs were called, all known charms, spells and incantations were tried but to no avail. Wise men were assembled together and they came to the decision that until the tiger’s whiskers could be removed, there was no hope of a recovery. They were of the opinion that if two ounces of chebulic myrobalan (scientific name: termininalia chebula; known in Ayurvedic medicine as Aralu, credited with having laxative and stomachic properties) and a clove weighing one masha were administered, his health could be restored.

The Emperor searched everywhere for the ingredients but they could not be found – it was only until his Prime Minister, who had heard of the Gurus’ fame, was informed that there were available from the Gurus’ storehouse, that hope was restored. Although the Emperor was hostile to the Guru, yet as the Guru’s house was a mine of sympathy and compassion for all, there was no doubt that he would grant the articles required. The Emperor humbled himself before the Guru and sent a letter. The Guru was pleased that the Emperor had such confidence in him as to write such a friendly letter, and consented to give the required medicines. “Behold,” said the Guru, “with one hand man breaks flowers and with one hand offers them, but the flowers perfume both hands alike. The axe cuts the sandal tree, yet the sandal perfumes the axe. The Guru ought, therefore, to return good for evil.”

The ingredients were weighed and it was explained that these medicines would cause the hardest substance taken to be digested. To these ingredients, the Guru added a pearl which was to be ground and used as a subsidiary remedy. The Emperor was naturally very pleased and forgot all his enemity with the Guru, and vowed that he would never again cause him annoyance. His medicine was administered and effected a speedy and complete cure.

After the death of Shah Jahan, the attitude of the state headed by Aurangzeb towards the non-muslims, turned hostile. Emperor Aurangzeb made an excuse for the help rendered to prince Dara Shikoh by Guru Sahib during the war of succession and framed false charges against Guru Sahib who was summoned to Delhi. Baba Ram Rai Ji appeared on behalf of Guru Sahib in the court. He tried to clarify some misunderstandings regarding Guru Ghar and Sikh faith, created by Dhirmals and Minas. Yet another trap, which he could not escape, was to clarify the meaning of the verse “The Ashes of the Mohammadan fall into the potter’s clot, it is moulded into pots and bricks, and they cry out as they burn”. Baba Ram Rai in order to please the emperor and gain his sympathy distorted Gurbani. When Guru Har Rai Ji was informed about this incident, he immediately excommunicated Ram Rai Ji from the Sikh Panth and never met him, through the later pleaded repeatedly for forgiveness. Thus Guru Sahib established a strict property for the Sikhs against any alteration of original verse in Guru Granth Sahib and the basic conventions set up by Guru Nanak Sahib.