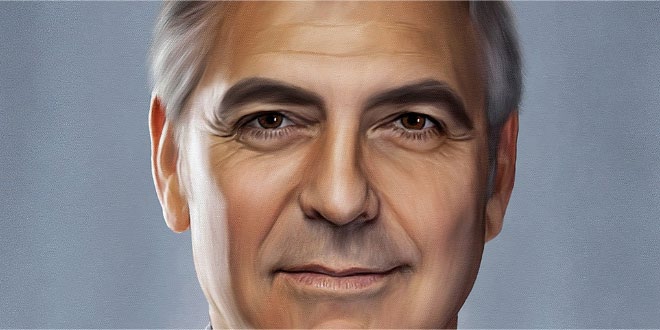 George Timothy Clooney (born May 6, 1961) is an American actor, film director, producer, and screenwriter. For his work as an actor, he has received three Golden Globe Awards and an Academy Award. Clooney is also noted for his political activism, and has served as one of the United Nations Messengers of Peace since January 31, 2008.

Though he made his acting debut on television in 1978, Clooney gained fame and recognition by portraying Dr. Douglas “Doug” Ross on the long-running medical drama ER from 1994 to 1999. While working on ER, he started attracting a variety of leading roles in films including Batman & Robin (1997) and Out of Sight (1998), in which he first teamed with long-term collaborator Steven Soderbergh. In 2001, Clooney’s fame widened with the release of his biggest commercial success, Ocean’s Eleven, the first of a profitable film trilogy, a remake of the film from 1960 with the members of The Rat Pack with Frank Sinatra as Danny Ocean. He made his directorial debut a year later with the 2002 biographical thriller Confessions of a Dangerous Mind, and has since directed Good Night, and Good Luck (2005), Leatherheads (2008), and The Ides of March (2011). He won the 2006 Academy Award for Best Supporting Actor for his work in the Middle East thriller Syriana (2005).

Clooney’s humanitarian work includes his advocacy of finding a resolution for the Darfur conflict, raising funds for the 2010 Haiti earthquake, 2004 Tsunami, and 9/11 victims, and creating documentaries such as Sand and Sorrow to raise awareness about international crises. He is also a member of the Council on Foreign Relations.

Clooney was born in Georgetown, Kentucky. His mother, Nina Bruce (nee Warren, 1939–), is a former beauty pageant queen. His father, Nick Clooney, is a former anchorman, as well as a game show and American Movie Classics host. Clooney’s ancestry includes Irish, German, and English. His paternal great-great-grandparents, Nicholas Clooney (of County Kilkenny) and Bridget Byron, immigrated to the United States from Ireland. Clooney was raised a strict Roman Catholic. He has an older sister, Adelia (also known as Ada); his cousins include actors Miguel and Rafael Ferrer, who are the sons of his aunt, singer Rosemary Clooney, and actor Jose Ferrer. He is also related to another singer, Debby Boone, who married his cousin Gabriel Ferrer (son of Jose Ferrer and Rosemary Clooney).

Clooney began his education at the Blessed Sacrament School in Fort Mitchell, Kentucky. Spending part of his childhood in Ohio, he attended St. Michael’s School in Columbus, and St. Susanna School in Mason. In middle school, Clooney developed Bell’s palsy, a debilitating condition that partially paralyzes the face. The malady went away within a year. “That was the worst time of my life,” he told the Daily Mirror in 2003. “You know how cruel kids can be. I was mocked and taunted, but the experience made me stronger.”

His parents eventually moved to Augusta, Kentucky, where Clooney attended Augusta High School. He has stated that he earned all As and a B in school, and was an enthusiastic baseball and basketball player. He tried out to play professional baseball with the Cincinnati Reds organization in 1977, but was not offered a contract. He did not pass the first round of player cuts. He attended Northern Kentucky University from 1979 to 1981, majoring in Broadcast Journalism, and very briefly attended the University of Cincinnati, but did not graduate from either. He had such odd jobs as selling men’s suits and cutting tobacco.

After leaving ER, Clooney starred in commercially successful projects including The Perfect Storm and O Brother, Where Art Thou?. In 2001, he teamed up with Soderbergh again for Ocean’s Eleven, a remake of the 1960s Rat Pack film of the same name. As of 2011, it was Clooney’s most commercially successful film, earning more than $450 million worldwide. The film spawned two sequels starring Clooney, Ocean’s Twelve in 2004 and Ocean’s Thirteen in 2007.

In 2001, Clooney and Soderbergh co-founded Section Eight Productions, for which Grant Heslov was president of television. Clooney made his directorial debut in the 2002 film Confessions of a Dangerous Mind, an adaptation of the autobiography of TV producer Chuck Barris. Though the film didn’t do well at the box office, Clooney’s direction showed promise.

In 2005, Clooney starred in Syriana, which was based loosely on former Central Intelligence Agency agent Robert Baer and his memoirs of being an agent in the Middle East. Clooney suffered an accident on the set of Syriana, which resulted in a brain injury with complications arising from a punctured dura. The same year he directed, produced, and starred in Good Night, and Good Luck, a film about 1950s television journalist Edward R. Murrow’s famous war of words with Senator Joseph McCarthy. At the 2006 Academy Awards, Clooney was nominated for Best Director and Best Original Screenplay for Good Night, and Good Luck, as well as Best Supporting Actor for Syriana. He won the Oscar for his role in Syriana.