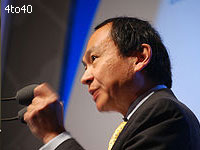 Renowned for declaring ‘the End of History’ after the fall of the Soviet Union, Yoshihiro Francis Fukuyama is professor of international political economy at the School of Advanced International Studies at Johns Hopkins University and author most recently of America at the Crossroads: Democracy, Power, and the Neoconservative Legacy.

Fukuyama is best known as the author of The End of History and the Last Man, in which he argued that the progression of human history as a struggle between ideologies is largely at an end, with the world settling on liberal democracy after the end of the Cold War and the fall of the Berlin Wall in 1989. Fukuyama predicted the eventual global triumph of political and economic liberalism. “What we may be witnessing is not just the end of the Cold War, or the passing of a particular period of post-war history, but the end of history as such… That is, the end point of mankind’s ideological evolution and the universalization of Western liberal democracy as the final form of human government,” he writes. The book made the bestseller lists in the United States, France, Japan, and Chile, and has been awarded the Premio Capri for the Italian edition.

As a key Reagan Administration contributor to the formulation of the Reagan Doctrine, Fukuyama is an important figure in the rise of Neoconservatism. This is a political philosophy that emerged in the US from the rejection of the social liberalism, moral relativism, and New Left counterculture of the 1960s. It influenced the presidential administrations of Ronald Reagan and George W Bush, representing a realignment in American politics, and the defection of some liberals to the right of the political spectrum; hence the term, which refers to being ‘new’ conservatives. Neoconservatism emphasizes foreign policy as the paramount responsibility of government, maintaining that America’s role as the world’s sole superpower is indispensable to establishing and maintaining global order. In February 2006, Fukuyama wrote in New York Times Magazine: “What is needed now are new ideas for how America is to relate to the rest of the world—ideas that retain the neoconservative belief in the universality of human rights, but without its illusions about the efficacy of American power and hegemony to bring these ends about.”