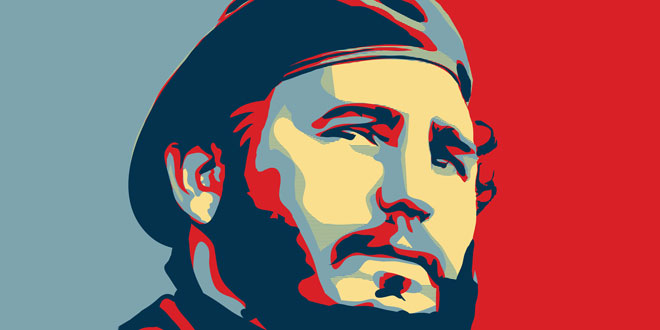 Fidel Castro Ruz was born on August 13, 1926 (some sources give 1927), on his family’s sugar plantation near Biran, Oriente, Province. His father was an immigrant from Galcia, Spain. He attended good Cathotic schools in Santiago de Cuba and Havana, where he took the spartan regime at a Jesuit boarding school, Colegio de Belen. In 1945 he enrolled at the University of Havana, graduating in 1950 with a law degree. In 1948, he married Mirta Diaz-Balart and divorced her in 1954. Their son, Fidel Castro Ruz Diaz-Balart, born in 1949, has served as head of Cuba’s atomic energy commission.

Fidel Castro Ruz, Cuba’s enduring “maximum leader,” has held power since 1959. He is president (since 1976; formerly prime minister), first secretary of the Cuban Communist party, and commander of the armed forces. A member of the social-democratic Orthodoxo party in the late 1940s and 1950s, Castro was an early and vocal opponent of the dictatorship of Fulgencio Batista. In 1952, he ran for election to the Cuban House of Representatives. But troops led by Batista halted the election and ended democracy in Cuba. As a result of Batista’s actions, Castro tried to start a revolution against the Batista dictatorship. He eventually succeeded on January 1, 1959 and took control of the Cuban government.

Castro, who has no rivals for power, demands the absolute loyalty of those around him. As a lawyer by training, Castro led the Cuban Revolution and transformed the island into the first Communist state in the Western Hemisphere. He has been less than successful as an economic policymaker: Cuba remains a poor country in debt whose livelihood depended on sugar production and Soviet economic aid – which was cut off after the demise of the Soviet Union. He nonetheless holds the system in place. His greatest accomplishment is the consolidation of the Communist regime in the Caribbean, so close to Cuba’s main antagonist. In no small measure, the Cuban Revolution is still Castro’s revolution.