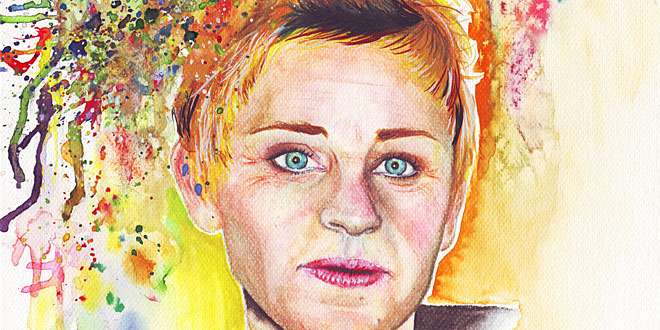 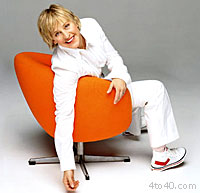 DeGeneres has hosted both the Academy Awards and the Primetime Emmys. As a film actress, she starred in Mr. Wrong, appeared in EDtv and The Love Letter, and provided the voice of Dory in the Disney-Pixar animated film Finding Nemo, for which she was awarded a Saturn Award for Best Supporting Actress, the first and only time a voice performance won a Saturn Award. She was a judge on American Idol for one year, having joined the show in its ninth season. She also starred in two television sitcoms, Ellen from 1994 to 1998 and The Ellen Show from 2001 to 2002. During the fourth season of Ellen in 1997, DeGeneres came out publicly as a lesbian in an appearance on The Oprah Winfrey Show. Shortly afterwards, her character Ellen Morgan also came out to a therapist played by Winfrey, and the series went on to explore various LGBT issues including the coming out process. She has won thirteen Emmys and numerous other awards for her work and charitable efforts.

In November 2011, Secretary of State Hillary Clinton named her a Special Envoy for Global AIDS Awareness.

DeGeneres was raised in Metairie, Louisiana, the daughter of Elizabeth Jane DeGeneres (née Pfeffer), a speech therapist, and Elliott Everett DeGeneres, an insurance agent. She has one brother, Vance DeGeneres, who is a producer and musician. She is of French, English, German and Irish descent. DeGeneres was raised as a Christian Scientist until the age of thirteen. In 1973 DeGeneres’s parents filed for separation and were divorced the following year. Shortly after, Betty Jane remarried Roy Gruessendorf, who worked as a salesman. Betty Jane and Ellen moved with Gruessendorf from the New Orleans area to Atlanta, Texas. Vance stayed with their birth father.

DeGeneres graduated from Atlanta High School in May 1976, after completing her first years of high school at Grace King High School in Metairie, Louisiana. She moved back to New Orleans to attend the University of New Orleans, where she majored in communication studies. After one semester, she left school to do clerical work in a law firm with her cousin Laura Gillen. She also held a job selling clothes at the chain store the Merry-Go-Round at the Lakeside Shopping Center. Other working experiences included J.C. Penney, being a waitress at TGI Friday’s and another restaurant, a house painter, a hostess, and a bartender. She relates much of her childhood and career experiences in her comedic work.

On a February 9, 2011 episode of The Ellen DeGeneres Show, DeGeneres told her studio audience via a letter from the New England Genealogical Society that she is Kate Middleton’s 15th cousin via their shared common ancestor Thomas Fairfax.

DeGeneres started performing stand-up comedy at small clubs and coffee houses. By 1981 she was the emcee at Clyde’s Comedy Club in New Orleans. DeGeneres cites Woody Allen and Steve Martin as her main influences at this time. In the early 1980s she began to tour nationally, being named Showtime’s Funniest Person in America in 1982. In 1986 she appeared for the first time on the Tonight Show with Johnny Carson, who likened her to Bob Newhart. When Carson invited her over for an onscreen chat after her performance, she became the first comedienne in the show’s history to be treated this way.