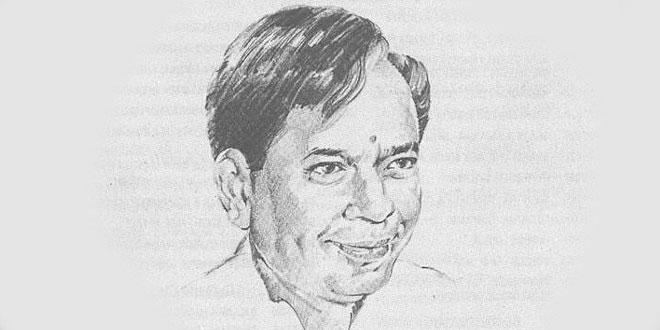 Murali Krishna was born on 6th July 1930 at Sankaraguptam in Andhra Pradesh in an artistically inclined family. His father Mangalampalli Pattabhiramayya, was a famous flautist and mother Suryakanthamma a Veena artiste. Balmurali Krishna took training in music under Parupalli Rama Krishnayya Pantulu. When he was eight years old he gave his first public performance at Vijayawada during the ‘sadguru Arandhanotsavas’. He was given the title ‘Bala’ by Musunuri Satyanarayana, a distinguished Harikatha performer. Young Murali Krishna exposed his extreme talent by writing a detailed work on the 72 Janakaraga or Melakarta (basic scales of music) scheme at the the tender age of 14.

Murali Krishna stopped his education in class 6th due to his continuous concerts and dedicated himself completely to music. Balamuralikrishna has innovated the Tala systems by introducing new principles and is credited with over 300-400 compositions and many new ragas. The ragas he has composed are Mahati, Sumukham, Trisakthi, Omkari, Rohini, Pratimadhyamavathi, Janasammodini, Manorama, Vallabhi, Lavangi etc. He has also recorded and released many albums.

Several honours and award has been bestowed on him which include Padma Vibhushan, Padma Shri, Best Play Back Singer (1976) & Best Music Director (1987) in the National Film Festivals and the UNESCO Mahatma Gandhi Silver Medal, State Musician of Tamil Nadu and Andhra Pradesh, the Asthana Vidwan of Tirumala Tirupati Devasthanam, Sringeri Peetam and Adivyadhi Hara Baktha Anjaneya Swami Temple, Nanganallur. Dr. Balamuralikrishna has also been granted a doctorate of Letters by the Sri Venkateshwara University (1981).

Murali Krishna is the founder of MBK trust for developing art and culture and imparting training. He also founded ‘Academy of Performing Arts and Research’ in Switzerland and is also working on music therapy. He has given innumerable concerts throughout the world and has recreated the traditional style in his own neo classical style well received by his audience.

The “Bala” in his name means “child”, and was added when he first gained fame as a child prodigy performing vocal concerts at the age of five. His father Pattabiramayya was a well known musician and could play the flute, violin and veena and his mother Suryakantamma was an excellent veena player. Balamuralikrishna thus began his musical career at a very young age. He soon mastered a variety of instruments, melodic and rhythmic, and is the only musician ever to be honoured with All India Radio’s “Top Grade” for seven different performance areas. He is an enterprising instrumentalist who plays violin, viola, khanjira, veena, mridangam and other instruments. He is also the only musician ever to win National Awards in India for classical music, music direction and film playback singing.

While his native tongue is Telugu, he sings with crystal-clear lyrical enunciation not just in Telugu but also in Kannada, Sanskrit, Tamil and less often, in a few other languages as well. His mesmerizing vocal music combines a charmingly deep voice, effortless control over the notes, extraordinary musical knowledge, spontaneous on-stage musical originality and a consistently accurate rendition of lyrics. Consequently, it has caught the pulse of and endeared itself to vastly diverse audiences across generations, cultures and continents. He belongs to that rarest breed of Carnatic musicians who remain popular with laypersons without watering down the classicism inherent in the ancient artform. His rendition of some of Saint Thyagaraja’s kritis is spiritually uplifting. Given the astounding versatility, longevity and resilience of his artistic life, spanning over seven creative and prolific decades, it can be stated without exaggeration that Dr. M. Balamurali Krishna has, for quite some time, been India’s most enduring musician.

Nearly 400 Carnatic musical compositions are credited to him. New raga (Ganapathi, mahati, sumukham, trisakthi, sarvashri, omkari, janasamodini, manorama, rohini, vallabhi, lavangi, pratimadhyamavathi, sushama etc) some with only three or four notes, and a new tala (rhythm) system are among his iconoclastic innovations. Such innovations have provoked many criticisms, but his musical inventiveness remains unblunted. Top Hindustani (north Indian classical) musicians have collaborated with him in “jugalbandhis” (duets akin to jamming): including Pandit Bhimsen Joshi, Pandit Hariprasad Chaurasia and Smt. Kishori Amonkar, among others.

He appeared as featured soloist with an award-winning British choir, performing the “Gitanjali Suite” with words from Rabindranath Tagore’s Nobel Prize-winning poetry and music by Dr. Joel, the noted UK-based Goan composer. His clear diction in several languages prompted an invitation to record Tagore’s entire Rabindra Sangeet compositions in Bengali, preserving them for posterity. He has sung in French, and even ventured into jazz fusion, collaborating with the top Carnatic percussion teacher, Sri T. H. Subash Chandran, in a concert for Malaysian royalty.

Honours have pursued him. He was awarded the prestigious “Padma Vibhushan” title by the Indian government, the “Chevalier des Arts et des Lettres” by the French government, seven doctorates as of 2006, the pro-chancellorship of Telugu University and numerous top musical honours including Sangeetha Kalanidhi of the Madras Music Academy. He was also conferred with the prestigious Raja-Lakshmi Award in the year 1980 by Sri Raja-Lakshmi Foundation, Chennai. The prestigious award “Sangeetha Saraswathi” instituted by Manava Seva Kendra was conferred on him by its founder-guardian Poojya Sri Guruji Viswanath, on 25th June 2005. The city of Vijayawada in Andhra Pradesh, India, has named a road after him. The record-buying public have supported him enthusiastically, prompting record labels to issue hundreds of his recordings. He has become increasingly interested in music therapy, and now performs only occasionally.

His place among the all-time greats of Carnatic music seems assured.