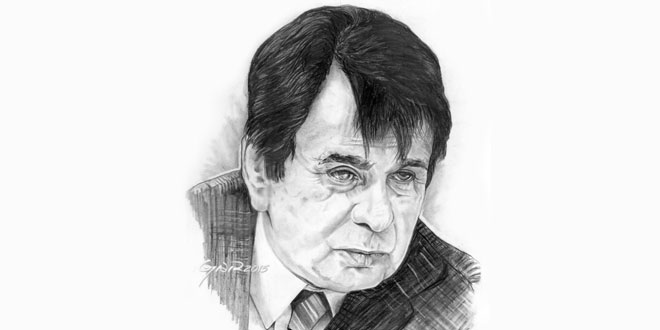 Dilip Kumar – One of the greatest actors ever to grace the Indian silver screen – Dilip Kumar was a name to reckon with in the Hindi tinsel world in the 50’s and 60’s. His unique style of acting has inspired many upcoming actors and hopefuls but none have even remotely been able to match his natural, one and only style. Dilip aka Yusuf Khan was born in Peshawar (now Pakistan) in 1922 in a Pathan Family of 12 children. His father who was a fruit merchant later moved to Mumbai in Maharashtra and set up business there.

A small tiff with his father made young Yusuf run away to Pune. There he started to work in a British Army canteen and later having saved some amount, set up his own fruit stall. As far as his interest in art goes, even from a young age Yusuf was fond of gazals and was himself a good singer and sitar player never knowing that later, he was to render his voice in a Hrishida film.

In the 40’s Yusuf was initiated to the world of films by the leading actress of those days Devika Rani, who was also the proprietor of the famous studio Bombay Talkies. Yusuf who was re-christened Dilip Kumar by a famed Hindi novelist made his debut in their film ‘Jwar Bhatta’ in 1944. He became successful as a hero opposite singing actress Noorjehan in the film ‘Jugnu’ (1947)… next came ‘Mela’ (1948) in which he played the doomed lover and then Mahboob Khan’s ‘Andaz’ (1949) a love triangle opposite superstars Nargis and Raj Kapoor which became a big hit and elevated him to a super star level.

The next three years saw him in tragic roles very similar to his role in Mela in films like Babul (1950), Arzoo (1950), Jogan (1950), Deedar (1951), Udan Khatola (1955) and Bimal Roy’s super hit Devdas. The release of a number of tragic films earned him the title of the ‘Tragedy King’ initially. With his naturalistic emoting conveyed through changing expressions and a well modulated voice he gave a new meaning to Hindi films and became a role model to young aspirants as well as established ones. However, pain-soaked roles took its toll on the actor’s psyche, which reportedly made him seek psychological counseling..

In between, his continuous tragic roles gave a high handedness to his characters that he consciously tried to break free of his image and began to accept more light hearted films in which also he excelled. His versatility shown through in films like Ganga Jamuna and the comedy Ram Aur Shyam, two of the best roles in his career, where in the latter playing a double role his comical brilliance was displayed.

On the personal front, Dilip the star was linked with a number of actresses like Kamini Kaushal, Madhubala, Vyjayanti Mala Bali but he never settled down until late at the age of 44 he married the lovely young Saira Bano. He created quite a sensation in those days by marrying her, an actress half his age. Much later he created quite a similar stir by getting married a second time to Asma while still very much married to Saira. But his second marriage was a short lived one.

After Ram Aur Shyam, his career suffered a drawback in the 70’s. No other film clicked at the box office and Dilip reduced work to one or two films at a time. By the end of 70’s he took a complete break from films for some years. He became involved in various other interests like literature, theatre and comparative religions. But he made a triumphant return to Hindi cinema in the 1980s when Amitabh dominated the scene, with meaty roles in two big hits, Manoj Kumar’s ‘Kranti’ (1981) and Ramesh Sippy’s ‘Shakti’ (1982) in which the latter earned him yet another Filmfare award. Then came Subhash Ghai’s Vidhaata, Karma and then Saudagar as late as in 1991which were equally successful.

This living legend of Indian Cinema has been honoured with the Filmfare Lifetime achievement award in 1993 and the Prestigious Dada Saheb Phalke award in 1995 for his contributions. In a career spanning over five decades this veteran actor with his fine performances has found a place in the world of Hindi films that few could vie for, though he retains that his first love was never cinema but soccer. The aging actor now leads a retired life but his charisma lingers.

Dilip Kumar is regarded as arguably the greatest actor ever to grace the Indian silver screen. His performances have been regarded as the epitome of emoting in Indian Cinema. Though he has done all kinds of films – he balanced a lightweight Shabnam (1949) with the intense Andaaz (1949), the ultra-serious Daag (1952) with the swashbuckling Aan (1952), the heavy Devdas (1955) with the entertainer Azaad (1955), he is mainly remembered as the King of Tragedy.

He was born in Peshawar (now Pakistan) as Yusuf Khan in a Pathan Family of 12 children who later moved to Maharashtra as fruit merchants. From being the assistant manager in an army canteen, he set up his own fruit stall.

In Bombay, he was given his first break by Devika Rani, who cast him as the hero of Bombay Talkies Jwar Bhatta (1944). He attained stardom with Jugnu (1947) opposite singing diva Noorjehan.

The success of Shaheed (1948) and Mela (1948), a Devdas type of film set Dilip Kumar off in a chain of films were he played a doomed lover – Andaaz (1949), which made him a superstar, Babul (1950), Jogan (1950), Deedar (1951), Udan Khatola (1955) and of course Devdas. But at times his heavy mannerisms acquired in his tragedy roles gave his characters a heavy-handedness that could be quite difficult to take – like in Devdas and particularly in the adaptation of Wuthering Heights – Dil Diya Dard Liya (1966).

Playing mostly serious roles however began to take its toll on him and on psychiatric advice he switched over to do more light-hearted musical films and what’s more actually appeared quite at home in them. Azaad, and Kohinoor (1960)

Mughal-e-Azam (1960) and Ganga Jamuna (1961) marked the peak of Dilip Kumar’s career. But though his performance as Salim in the former has often been rated as among his best ever, he actually looks strangely uncomfortable in the film. Ganga Jamuna however was a flawless performance and perhaps the greatest of his career. His Bhojpuri dialect in the film was perfect and it was shocking he lost the Filmfare Award that year to Raj Kapoor for Jis Desh Mein Ganga Behti Hai (1960).

He married actress Saira Bano in 1966 and was absolutely brilliant in the comedy Ram Aur Shyam (1967) essaying a double role and displaying razor sharp comic timing but his career ran out of steam in the 1970s.

Taking a break from acting, he made a grand comeback in character roles with Manoj Kumar’s Kranti (1981) and Ramesh Sippy’s Shakti (1982) where his larger than life author-backed role confirmed his legendary status. It was yet another brilliant performance. To quote one of the writers of the film, Salim Khan.

“We were amazed that he has given a whole new dimension to the character we had written. It happens very rarely that you have a competent script and the film goes beyond what you imagined… Dilip Kumar understood the character and enhanced it his own way.”

Shakti was also perhaps Director Ramesh Sippy’s best film. But unfortunately the film failed at the box-office. It won Dilip Kumar yet another Filmfare Award for Best Actor though.

Dilip Kumar has continued to do strong central character roles in films though his first official directorial venture Kalinga is yet to be released.

Interestingly, Dilip Kumar refused Guru Dutt’s Pyaasa (1957) feeling that the character of the poet Vijay in the film was just an extension of his role in Devdas. And turned down 20th Century Fox’s offer of The Rains Came and David Lean’s offer of the role which ultimately went to Omar Sharif in Lawrence of Arabia (1962).

To quote him
“In your own bazaar you enjoy a certain status. What’s the point of venturing out into fields unknown where you have no say? No contact with the subject matter.”

Dilip Kumar’s acting has inspired many Indian actors to try and copy his style but none have even remotely been able to match him. Which just goes on to prove that Dilip Kumar was sorry… is truly one and one of a kind.

Previous Yes Virginia, There is a Santa Claus
Next Aamir Raza Hussain Biography For Students