1992 — Diana and Charles announce their separation

1993 — Diana reveals her plan to withdraw from public life

1995 — Diana discusses her marriage on TV

What was it about Diana, Princess of Wales, that brought such huge numbers of people from all walks of life literally to their knees after her death in 1997? What was her special appeal, not just to British subjects but also to people the world over? A late spasm of royalism hardly explains it, even in Britain, for many true British monarchists despised her for cheapening the royal institution by behaving more like a movie star or a pop diva than a princess. To many others, however, that was precisely her attraction. 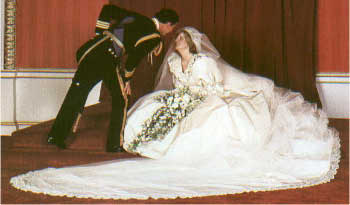 Diana was beautiful , in a fresh-faced, English, outdoors-girl kind of way. She used her big blue eyes to their fullest advantage, melting the hearts of men and women through an expression of Marilyn Monroe, contained an appeal directed not to any individual but to the world at complete vulnerability. Diana’s eyes, like those of large. Please don’t hurt me, they seemed to say. She often looked as if she were on the verge of tears, in the manner of folk images of the Virgin Mary. Yet she was one of the richest, most glamorous, and socially powerful women in the world. This combination of vulnerability and power was perhaps her greatest asset.

Diana was a princess, but there are many princesses in Europe, none of whom ever came close to capturing the popular imagination the way she did. Princess Grace of Monaco was perhaps the nearest thing, but then she had really been a movie star, which surely provided the vital luster to her role as figurehead of a country that is little more than a gambling casino on the southern coast of France. The rather louche glamour of Monaco’s royal family is nothing compared with the fading but still palpable grandeur of the British monarchy. To those who savor such things, British royals are the first among equals of world royalty, the last symbols of an aristocratic society that has largely disappeared in most places but still hangs on, with much of its Victorian pomp intact, in Britain. Even the Japanese Emperor Hirohito never forgot being overawed by the style of his British royal hosts on his first trip to Europe in the 1920s.

Diana not only married into the British monarchy but was the offspring of a family, the Spencers, that is at least as old as the British royal family and considers itself in some ways to be rather grander. It is not rare in England to hear the Spencers’ Englishness compared favorably with the “foreign” (German) background of the Windsors. The famous speech, given by Diana’s younger brother, the Earl of Spencer, at her funeral in London, with its barely contained hostility toward his royal in-laws, moved many people at the time but was in fact an exercise of extraordinary hauteur.

So Diana had snob appeal to burn. But that alone would not have secured her popularity. Most of the people who worshipped her, who read every tidbit about her in the gossip press and hung up pictures of her in their rooms, were not social snobs. Like Princess Grace of Monaco. Diana was a celebrity royal. She was a movie star who never actually appeared in a movie; in a sense her whole life was a movie, a serial melodrama acted out in public, with every twist and turn of the plot reported to a world audience. Diana was astute enough to understand the power of television and the voracious British tabloid newspapers. And she consistently tried to use the mass media as a stage for projecting her image – as the wronged spouse, as the radiant society beauty, as the compassionate princess hugging AIDS patients and land mine victims, and as the mourning princess crying at celebrity funerals.

However, like many celebrities before her, she found out that she couldn’t turn the media on and off at will, as though they were a tap. They needed her to feed the public appetite for celebrity gossip, and she needed them for her public performance, but what she hadn’t bargained for was that her melodrama ran on without breaks. Everything she said or did was fair copy. After deliberately making her private life public, she soon discovered there was nothing private left.

In a sense, the quasi-religious mystique of royalty came full circle with Diana. Monarchy used to be based on divine right. But just as monarchy used religious trappings to justify its rule, modern show biz celebrity has a way of slipping into a form of popular religion. It is surely not for nothing that an idolized pop singer of recent times so successfully exploited her given name, Madonna. One of the most traditional roles of religious idols is a sacrificial one; we project our sins onto them, and they bear our crosses in public.

Diana was a sacrificial symbol in several ways. First she became the patron saint of victims, the sick, the discriminated against, the homeless. Then, partly through her real suffering at the hands of a rigidly formal family trained to play rigidly formal public roles, and partly through her shrewd manipulation of the press, Diana herself projected a compelling image of victimhood. Women in unhappy marriages identified with her; so did outsiders of one kind or another, ethnic, sexual, or social. Like many religious idols, she was openly abused and ridiculed, in her case by the same press that stoked the public worship of her. And finally she became the ultimate victim of her own fame: pursued by paparazzi, she became a twisted and battered body in a limousine. It was a fittingly tawdry end to what had become an increasingly tawdry melodrama. But it is in the nature of religion that forms change to fit the times. Diana – celebrity, tabloid princess, mater dolorosa of the pop and fashion scene – was, if nothing else, the perfect idol for our times.