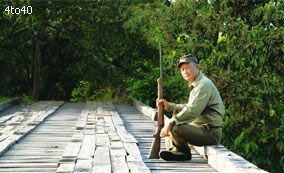 Dharnidhar Boro — Until the late 1990s, the national highway that connected Assam’s capital Guwahati with the Kaziranga National Park, around 215km away, was a dusty, choppy road, eroded by years of devastating floods. In the past decade, Assam has become a tourist-friendly state. The same highway is a cruise now.

Beyond the smooth roads and the new tourist resorts that have sprung up on the forest’s periphery, Kaziranga is one of the country’s few success stories in wildlife preservation.

The one-horned rhinoceros, an animal poached for years for its horn (sold for up to Rs15 lakh in markets in India as well as China), is far from being an endangered species. Thanks to Dharanidhar Boro, the forest range officer who has been at the helm of this preservation drive since 1987, in Kaziranga animals roam freely in their natural habitat and the forest thrives on fertile land. Cloaked in muddy silt, hefty, thick-skinned rhinos stared indifferently at us through lush, tall lokasa grass.

Boro and his team of around 250 forest guards have been keeping vigil in the 862 sq. km forest round the clock for the past decade. Although an employee of the state’s forest department, he has not been transferred from his post because the government is perhaps convinced that nobody knows the forest or its nooks and animals as well as this 52-year-old range officer. He has been invited to international wildlife seminars to talk about his efforts (around 100 poachers have been arrested since he joined, and around 40 killed in encounters), although a promotion has not come his way since 1987.

He belongs to the Bodo tribe, still a backward one in the state’s multi-tribal, multi-ethnic demographic. Boro was the first graduate from Kasaighat village in Golaghat district, where Kaziranga is located. “Even though our village had many families from the Bodo tribe, the school I went to mostly had children from upper caste families. We were’t encouraged to study subjects such as Sanskrit. But I did well in math, and finally completed my BSc in botany.” Not surprising that Boro developed a penchant for Sanskrit early on. He has a habit of reciting Sanskrit verses while talking about his work and his struggle. It’s his way of philosophizing his years of struggle, which has gone largely unrewarded in material terms.

He recites a line in Sanskrit, indicative of one of his deepest beliefs, and translates its essence into English: “Nature never betrays the heart”. Boro appeared for the state civil services examination, the Assam Public Service Commission, in 1986, and got the job as range officer of Kaziranga National Park the next year. His family includes his wife and daughter who still live in Kasaighat.

His strength really is the openness with which he has embraced the local population—people who live in neighbouring villages, who are making a shaky transition to urbanization. “Most of the village population here is not skilled, and they are insecure because more and more immigrants, mostly from Bangladesh, are settling in neighbouring villages. Due to the lack of infrastructure and education until a few years ago, some villagers helped poachers get into the forest area to earn their bit.”

Boro encourages young people to join the forest department and offers small perks to families, such as vegetables from his own garden. “The worst crisis that the forest department will face in a few years is the reluctance of village boys to work in the forest. Now I have more casual labourers than the department’s own forest guards, because people think why go for something as risky as this when there are better job opportunities in tourism.”

Boro says one of the things Kaziranga has taught him is to be a cautious optimist. He says, of the forest’s future, “According to the census taken in April 2009, the number of rhinos has gone up to 2,048 (from 1,855 in 2004). But the real task is to make this a place where animals and human beings benefit from each other in a wildlife-friendly way.”

Share
Previous What is a grass skirt?
Next What is a hanbok?