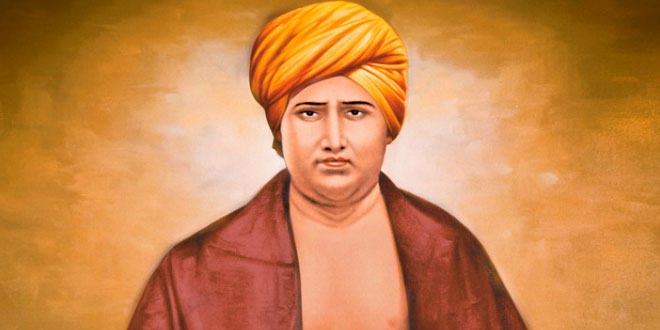 The founder of Arya Samaj (the Society of Nobles), Swami Dayanand Saraswati was one of the greatest religious leaders ever born in India. He was responsible, to some an extent, in bringing back the age-old teaching tradition of ‘Gurukul’. He advocated for the equal right of women and condemned practices such as untouchability, animal sacrifice, idol worship, etc.

Born as Mool Shankar Tiwari to a pious Gujarati couple in 1824, Mool Shankar had an inquisitive mind, and a compassionate nature from his childhood. Once on a Shivaratri festival day, which is observed by fasting and keeping awake the whole night in obedience to Lord Shiva, he saw a mouse dancing on the Shivalinga idol. He tried to find out from elders why this “God Almighty” could not defend himself against the menace of a petty mouse, for which he was rebuked! The sudden death of a favorite uncle, and his beloved sister caused much turmoil in Mool Shankar. He became quite detached from the world, and one day left home, incognito in search of a guru.

The search was long and arduous. Finally, at the age of thirty-six he found his mentor in Virajananda Saraswati, who was blind, but was a master of the ancient lore. The training was rigorous, and the guru was ruthless. But here was a disciple of a lifetime. As the teacher’s fee (gurudakshina – also has a sacred connotation in Hindu thought; it cannot be denied) he wanted his student to devote his life for the revival of Hinduism. The guru called him Dayananda.

Dayanand Sarasvati believed that the Vedas were perfect and infallible.

Dayananda advocated the doctrine of karma, skepticism in dogma, and emphasized the ideals of brahmacharya (celibacy and devotion to God).

Arya Samaj or the ‘society of Nobles’ is a Hindu reform movement, founded by Swami Dayanand Saraswati in the year 1875. The main principles, on which Arya Samaj is based, condemn…

According to Indian History, in 1883 Dayananda was invited by the Maharaja of Jodhpur, to stay at his palace. The Maharaja was eager to become his disciple and learn his teachings. One day Dayananda went to the Maharaja’s rest room and saw him with a dance girl. Maharaja loved this nautch girl. Dayananda boldly asked the Maharaja to forsake the girl & all unethical acts and follow Dharma like a true Aryan. Dayananda’s suggestion offended the dance girl and she decided to take revenge. She bribed Dayananda’s cook to poison him. At bedtime, the cook brought him a glass of milk containing poison & powdered glass. Dayananda drank the milk and went to sleep only to wake up later with a burning sensation. He immediately realized that he had been poisoned and attempted to purge his digestive system of the poisonous substance, but it was too late. The poison had already entered his blood stream. Dayananda was bedridden and suffered excruciating pain. Many doctors came to treat him but all was in vain. His body was covered all over with large bleeding sores. On seeing Dayananda’s suffering the cook was overcome with unbearable guilt and remorse. He confessed his crime to Dayananda. On deathbed, Dayananda forgave him and gave him a bag of money and told him to flee the kingdom lest he be found out and executed by the Maharaja’s men.