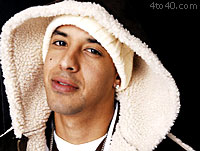 Ramon Luis Ayala Rodriguez (born February 3, 1977), known artistically as Daddy Yankee, is a Latin Grammy Award-winning Hispanic reggaeton recording artist. Ayala was born in Rio Piedras, the largest district of San Juan, where he became interested in music at a young age. In his youth he was interested in baseball, and aspired to become a Major League Baseball player. He was unable to continue this sport when he received an injury to one of his legs, leaving him unable to walk correctly. He then became involved in the underground rap movement that was in its early stages in Puerto Rico, later to be called reggaeton. After receiving lessons from several artists within the genre, he developed an independent career, first recording in a production titled Playero 37. After this he began to produce independent albums. His first solo album was No Mercy. He subsequently formed a duo with Nicky Jam, and then continued his solo career with the releases of El Cartel and El Cartel II. This led him be one of many pioneers of the reggaeton genre earning him the nickname “El Cangri”.

In 2002 El Cangri.com became Ayala’s first album with international success, receiving coverage in the markets of New York and Miami. Barrio Fino was released in 2004, and the album received numerous awards, including Lo Nuestro Awards and a Latin Billboard, as well as receiving nominations for the Latin Grammy and MTV Video Music Awards. Barrio Fino performed well in the sales charts of the United States, Latin America, Europe, and Japan. On June 5, 2007, El Cartel Records released El Cartel: The Big Boss, which was ranked as the top-selling album in Latin music genres in 2007. He promoted the album with an international tour which began in the United States and continued through Latin America, breaking attendance records in Ecuador and Bolivia.

His performances have appeared on more than 70 albums, including compilations such as Mas Flow 2 and Blin Blin Vol. 1. Outside of his work as a musician, Ayala has also worked as an actor and producer. Throughout his career, he has been generally reluctant to discuss his personal life, but has publicly expressed the importance of his wife and children to him.

Raymon Luis Ayala Rodriguez was born in Rio Piedras, Puerto Rico, and was influenced by several musicians in his family like his little brother Edwin Laureano Jr., also including his father and some of his mother’s relatives. During his childhood he practiced singing and focused on lyrical improvisation while his brother Edwin hustled in and out of juvenile halls. Although Laureano first aspired to join the ranks of baseball’s Major Leagues, he abandoned this goal after being involved in an incident—at age seventeen, he was caught in the crossfire of a (barrio) gun battle and received two bullet wounds. One bullet grazed his arm and the other, from an AK-47, hit him in the right thigh and left him with a permanent limp.

Following the incident, he became interested in the underground movement, which at the time was in an early organizational stage. He also took more interest in the events that took place in the neighborhood in which he was raised, a public housing project named Villa Kennedy. Early in his career he attempted to imitate the style of Vico C. He went on to emulate other artists in the genre, including DJ Playero, DJ Nelson, and DJ Goldy, taking elements from their styles in order to develop an original style. In doing so, he eventually abandoned the traditional model of rap and became one of the first artists to perform reggaeton. Ayala first recorded with DJ Playero as a featured artist in a production titled Playero 37, which was released in 1992.