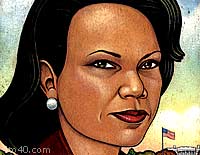 Rice was born on 14 November 1954 in Birmingham, Alabama the only child of Angelena Ray Rice, a high school science, music and oratory teacher, and John Wesley Rice, Jr., a high school guidance counselor and Presbyterian minister. Her unusal first name, Condoleezza, derives from the music-related term (opera stage instruction), con dolcezza, which in Italian means, “with sweetness”. Rice was raised in segregated Birmingham during the civil rights movement.

Rice began to learn French, music, figure skating and ballet at the age of three. At the age of fifteen, she began piano classes with the goal of becoming a concert pianist. While Rice ultimately did not become a professional pianist, she still practices often and plays with a chamber music group. She accompanied cellist Yo-Yo Ma playing Brahms’s Violin Sonata in D Minor at Constitution Hall in April 2002 for the National Medal of Arts Awards. In 1967, the family moved to Denver, Colorado. She attended St. Mary’s Academy, an all-girls Catholic high school in Cherry Hills Village, Colorado, graduating in 1971. After studying piano at the Aspen Music Festival and School, Rice enrolled at the University of Denver, where her father was then serving as an assistant dean.

She skipped first and seventh grades, entered college at 15, holds three degrees including a doctorate in political science, and earned her Master’s in just one year’s study. She obtained a master’s degree in political science from the University of Notre Dame in 1975. She first worked in the State Department in 1977, during the Carter administration, as an intern in the Bureau of Educational and Cultural Affairs. In 1981, at the age of 26, she received her Ph.D. in political science from the Josef Korbel School of International Studies at the University of Denver. Her dissertation centered on military policy and politics in what was then the communist state of Czechoslovakia. She was a professor of Political Science at Stanford from 1981-99, and from 1993-99 she was also Stanford’s provost, responsible for overseeing the school’s budget and academic programs. She served as a mid- to upper-level member of the National Security staff during the first Bush presidency, and as National Security Adviser during the second Bush presidency, before succeeding Colin Powell as Secretary of State in 2005.

Rice was a Democrat until 1982 when she changed her political affiliation to Republican in part because she disagreed with the foreign policy of Democratic President Jimmy Carter, and because of the influence of her father, who was Republican.

Rice is an American political scientist and diplomat. She served as the 66th United States Secretary of State, and was the second person to hold that office in the administration of President George W. Bush. Rice was the first African-American woman secretary of state, as well as the second African American (after Colin Powell), and the second woman (after Madeleine Albright). Rice was President Bush’s National Security Advisor during his first term, making her the first woman and first African American to serve in that position. Rice also served on the National Security Council as the Soviet and East European Affairs Advisor to President George H.W. Bush during the dissolution of the Soviet Union and German reunification.

Following her confirmation as Secretary of State, Rice pioneered a policy of Transformational Diplomacy, with a focus on democracy in the greater Middle East. Her emphasis on supporting democratically elected governments faced challenges as the Islamist militant Hamas captured a popular majority in Palestinian elections, and influential countries including Saudi Arabia and Egypt maintained authoritarian systems with U.S. support. While Secretary of State, she chaired the Millennium Challenge Corporation’s board of directors.

Rice headed Chevron’s committee on public policy until she resigned on January 15, 2001, to become National Security Advisor to President George W. Bush. Chevron, for unspecified reasons, honored Rice by naming an oil tanker Condoleezza Rice after her, but controversy led to its being renamed Altair Voyager. She also served on the board of directors for the Carnegie Corporation, the Charles Schwab Corporation, the Chevron Corporation, Hewlett Packard, the Rand Corporation, the Transamerica Corporation, and other organizations.

In 1992, Rice founded the Center for New Generation, an after-school program created to raise the high school graduation numbers of East Palo Alto and eastern Menlo Park, California. After her tenure as secretary of state, Rice was approached in February 2009 to fill an open position as a Pac-10 Commissioner, but chose instead to return to Stanford University in March 2009 as a political science professor and the Thomas and Barbara Stephenson Senior Fellow on Public Policy at the Hoover Institution. In September 2010, Rice became a faculty member of the Stanford Graduate School of Business and a director of its Global Center for Business and the Economy.

Angelena Rice, Her mother, died of breast cancer in August 1985, aged 61. In July 1989, Condoleezza’s father, John Wesley Rice, married Clara Bailey, to whom he remained married until his death, in December 2000, aged 77. He was a football and basketball coach throughout his life. Dr Rice dated the Denver Broncos’ Rick Upchurch while she was attending the University of Denver. She once owned a house and shared a line of credit with another woman, Stanford co-worker and documentary filmmaker Randy Bean, although the nature of their partnership remains unknown. More recently, she occasionally has football executive Gene Washington on her arm when she attends State Department events, but their relationship is described only as “cordial”. Dr Rice has never married, and has no children.