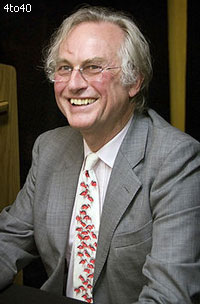 Clinton Richard Dawkins, FRS, FRSL (born 26 March 1941), known as Richard Dawkins, is a British ethologist, evolutionary biologist and author. He is an emeritus fellow of New College, Oxford, and was the University of Oxford’s Professor for Public Understanding of Science from 1995 until 2008.

Dawkins describes his childhood as “a normal Anglican upbringing”. Though he began having doubts about the existence of God when he was about nine years old, he was persuaded by the argument from design, an argument for the existence of God or a creator based on perceived evidence of order, purpose, or design in nature. By his mid-teens, he had instead concluded that the theory of evolution was a better explanation for life’s complexity, and became nonreligious.

Dawkins attended Oundle School from 1954 to 1959. He studied zoology at Balliol College, Oxford, where he was tutored by Nobel Prize-winning ethologist Nikolaas Tinbergen, graduating in 1962. He continued as a research student under Tinbergen’s supervision at the University of Oxford, receiving his M.A. and D.Phil. degrees in 1966, while staying as a research assistant for another year. Tinbergen was a pioneer in the study of animal behaviour, particularly the questions of instinct, learning and choice. Dawkins’ research in this period concerned models of animal decision making.

Dawkins was born in Nairobi, Colony of Kenya, British Empire. His father, Clinton John Dawkins, was an agricultural civil servant in the British colonial service, in Nyasaland (now Malawi). His father was called up into the King’s African Rifles duri ng the second world war and was based in Kenya, returning to England in 1949, when Richard was eight. Both of his parents were interested in natural sciences, and they answered Dawkins’ questions in scientific terms.From 1967 to 1969, Dawkins was an assistant professor of zoology at the University of California, Berkeley. During this period, the students and faculty at UC Berkeley were largely opposed to the ongoing Vietnam War, and Dawkins became heavily involved in the anti-war demonstrations and activities. He returned to the University of Oxford in 1970 taking a position as a lecturer, and in 1990, as a reader in zoology. In 1995, he was appointed Simonyi Professor for the Public Understanding of Science in the University of Oxford, a position that had been endowed by Charles Simonyi with the express intention that the holder “be expected to make important contributions to the public understanding of some scientific field”. Since 1970, he has been a fellow of New College, Oxford.

Clinton Richard Dawkins is a British ethologist, evolutionary biologist and popular science writer who holds the Charles Simonyi Chair for the Public Understanding of Science at the University of Oxford.

Dawkins first came to prominence with his 1976 book ‘the Selfish Gene’, which popularised the gene-centered view of evolution and introduced the term meme, helping found the field of memetics. In 1982, he made a widely-cited contribution to the science of evolution with the theory, presented in his book ‘the Extended Phenotype’, that phenotypic effects are not limited to an organism’s body but can stretch far into the environment, including into the bodies of other organisms. Dawkins is also known for his views on religion. He is an antireligionist, secular humanist and sceptic.

Dawkins coined the term meme (analogous to the gene) to describe how Darwinian principles might be extended to explain the spread of ideas and cultural phenomena. This spawned the field of memetics. While originally floating the idea in The Selfish Gene, Dawkins has largely left the task of expanding upon it to other authors. Rubbishing religion…

In September 2008, Dawkins retired from his post as Simonyi Professor of the Public Understanding of Science, announcing plans to “write a book aimed at youngsters in which he will warn them against believing in “anti-scientific” fairytale.”

On 19 August 1967, Dawkins married fellow ethologist Marian Stamp; they divorced in 1984. Later that same year, on 1 June, Dawkins married Eve Barham − with whom he had a daughter, Juliet Emma Dawkins − but they too divorced, and Barham died of cancer on 28 February 1999. In 1992, he married actress Lalla Ward. Dawkins had met her through their mutual friend Douglas Adams, who had previously worked with Ward on the BBC science-fiction television programme Doctor Who. Ward has illustrated over half of Dawkins’ books and co-narrated the audio versions of two of his books, The Ancestor’s Tale and The God Delusion. In 2008, Dawkins made a cameo appearance as himself in the Doctor Who episode “The Stolen Earth”.

Following the September 11, 2001 attacks, when asked how the world might have changed, Dawkins responded: Many of us saw religion as harmless nonsense. Beliefs might lack all supporting evidence but, we thought, if people needed a crutch for consolation, where’s the harm? September 11 changed all that. Revealed faith is not harmless nonsense, it can be lethally dangerous nonsense. Dangerous because it gives people unshakable confidence in their own righteousness. Dangerous because it gives them false courage to kill themselves, which automatically removes normal barriers to killing others. Dangerous because it teaches enmity to others labeled only by a difference of inherited tradition. And dangerous because we have all bought into a weird respect, which uniquely protects religion from normal criticism. Let’s now stop being so damned respectful!