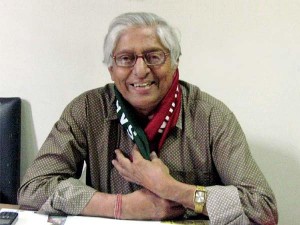 Subimal Chuni Goswami is an Indian Football player who played for the National Football team during 1950s and 1960s. Usually playing in the Left Inside position, Goswami was a Striker who known for an extra-ordinary control upon the ball and an accurate sense of the game.

He was born on the 15th of January 1938 at Kishoreganj, Bengal. He received his education at Thrithopati Institution and Kumar Asutosh Institution, Kolkata. Chuni learned the basics of Football from his school coach, Sibdas Banerjee and joined Junior Mohun Bagan Club in the year 1946 at the age of just 8 years. He played there till the year 1954 when he moved to Senior Mohun Bagan Club and continued playing for the club till the year 1968. During his tenure at Mohun Bagan, Goswami served the club as its Captain for 5 times.

Subimal Chuni Goswami made his debut in the International Football in the year 1956 when he was a part of the Indian Football team clashing against the Chinese Olympic team. The Indian squad beat China 1-0 in the match.

Further, he represented the nation in Football in around 50 International Football matches. These matches included Olympics, Asian Games, Asia Cup and Merdeka Cup. Chuni has to his credit the honor of leading the Indian Football team that won the Gold Medal in Asian Games 1962 held at Jakarta, and the Silver Medal in Asia Cup Soccer tournament 1964 held in Israel.

Performance as a Cricket Player

Apart from being a well acclaimed Football player, Subimal Chuni Goswami was an efficient Cricket player too, and represented Bengal team in 46 matches of First Class Cricket. Chuni began his First Class Cricket career in the year 1962, while playing in Ranji Trophy for Bengal. He also served as the Captain of the Bengal Cricket team for a period of time, and successfully led the team to the final round of Ranji Trophy twice in his career. During his overall First Class Cricket career, Subimal Chuni Goswami played 46 matches in which he scored 1592 runs including a single century, with a Batting Average of 28.42 runs and a highest score of 103 runs. During these matches, he also grabbed 47 wickets giving away 1134 runs with a Bowling Average of 24.08 runs.

For his outstanding contribution to both the sports of Football and Cricket, Subimal Chuni Goswami was bestowed upon various awards and honors. These include:

Chuni Goswami also served as the Director of Tata Football Academy in the state of Jharkhand from the year 1986 to the year 1989.