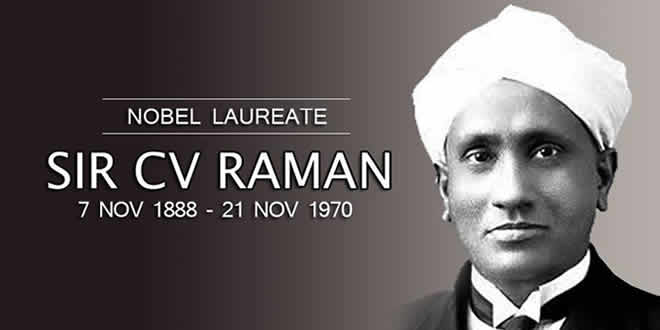 Born: November 7, 1888
Died: November 21, 1970
Achievements: He was the first Indian scholar who studied wholly in India received the Nobel Prize.

Indian Tamil physicist born in the former Madras Province in India presently the state of Tamil Nadu, who carried out ground-breaking work in the field of light scattering, which earned him the 1930 Nobel Prize for Physics

C.V. Raman is one of the most renowned scientists produced by India. His full name was Chandrasekhara Venkata Raman. For his pioneering work on scattering of light, C.V. Raman won the Nobel Prize for Physics in 1930.

Chandrashekhara Venkata Raman was born on November 7, 1888 in Tiruchinapalli, Tamil Nadu. He was the second child of Chandrasekhar Iyer and Parvathi Amma. His father was a lecturer in mathematics and physics, so he had an academic atmosphere at home. He entered Presidency College, Madras, in 1902, and in 1904 passed his B.A. examination, winning the first place and the gold medal in physics. In 1907, C.V. Raman passed his M.A. obtaining the highest distinctions.

During those times there were not many opportunities for scientists in India. Therefore, Raman joined the Indian Finance Department in 1907. After his office hours, he carried out his experimental research in the laboratory of the Indian Association for the Cultivation of Science at Calcutta. He carried out research in acoustics and optics.

In 1917, Raman was offered the position of Sir Taraknath Palit Professorship of Physics at Calcutta University. He stayed there for the next fifteen years. During his tenure there, he received world wide recognition for his work in optics and scattering of light. He was elected to the Royal Society of London in 1924 and the British made him a knight of the British Empire in 1929. In 1930, Sir C.V. Raman was awarded with Nobel Prize in Physics for his work on scattering of light. The discovery was later christened as “Raman Effect”.

In 1934, C.V. Raman became the director of the newly established Indian Institute of Sciences in Bangalore, where two years later he continued as a professor of physics. Other investigations carried out by Raman were: his experimental and theoretical studies on the diffraction of light by acoustic waves of ultrasonic and hypersonic frequencies (published 1934-1942), and those on the effects produced by X-rays on infrared vibrations in crystals exposed to ordinary light. In 1947, he was appointed as the first National Professor by the new government of Independent India. He retired from the Indian Institute in 1948 and a year later he established the Raman Research Institute in Bangalore, where he worked till his death.