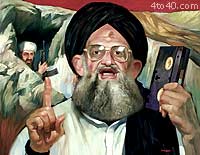 Ayman al-Zawahiri was born on June 19, 1951 to a prominent upper middle class family in Maadi, Egypt, a suburb of Cairo, and was reportedly a studious youth. His father, Mohammed Rabie al-Zawahiri, was a pharmacologist and a chemistry professor coming from a large family of doctors and scholars, while his mother, Umayma Azzam, came from a wealthy, politically active clan. He excelled in school, loved poetry, “hated violent sports” – which he thought were ‘inhumane’ – and had a deep affection for his mother.

His family was “religious but not overly pious”,and attended the Hussein Sedqi Mosque. Zawahiri became both quite pious and political, under the influence of his uncle Mahfouz Azzam, and lecturer Mostafa Kamel Wasfi. Qutb preached that to restore Islam and free Muslims, a vanguard of true Muslims modeling itself after the original Companions of the Prophet had to be developed.

By the age of 14, al-Zawahiri had joined the Muslim Brotherhood. The following year the Egyptian government executed Qutb for conspiracy, and al-Zawahiri, along with four other secondary school students, helped form an “underground cell devoted to overthrowing the government and establishing an Islamist state.” It was at this early age that al-Zawahiri developed a mission in life, “to put Qutb’s vision into action.” His cell eventually merged with others to form al-Jihad or Egyptian Islamic Jihad. Al-Zawahiri graduating from Cairo University in 1974 with gayyid giddan. Following that he served three years as a surgeon in the Egyptian Army after which he established a clinic near his parents. In 1978, he also earned a master’s degree in surgery.

In 1978 he married his wife Azza Ahmed Nowari, who was studying philosophy at Cairo University. Their wedding, at the Continental Hotel in Opera Square, was very pious, with separate areas for both men and women, and no music, photographs, or light hearted humour. Many years later, when the United States attacked Afghanistan following the September 11 attacks in 2001, Azza denied ever knowing that Zawahiri had been a jihadi emir (commander) for the last decade, although at least one acquaintance is skeptical of her ignorance of this fact.

The couple had four daughters, Fatima (b. 1981), Umayma, Nabila (b. 1986) and Khadiga (b. 1987), and a son Mohammed, who was a “delicate, well-mannered boy” and “the pet of his older sisters,” subject to teasing and bullying in a traditional all-male environment who preferred to “stay at home and help his mother.” Ten years after the birth of Mohammed, Azza gave birth to Aisha, who had Down syndrome. In February 2004, Abu Zubaydah was waterboarded, and subsequently stated that Abu Turab Al-Urduni had married one of al-Zawahiri’s daughters.

Zaynab Khadr recalled celebrating the engagement of Umayma at the family’s house for an all-day party, and al-Zawahiri knocking softly at Umayma’s door asking the two girls to please keep their singing and partying quiet as it was nighttime.

Azza and Aisha both died following 9/11. After American bombardment of a Taliban officials building at Gardez, Azza was pinned under debris of a guesthouse roof. Concerned for her modesty, she “refused to be excavated” because “men would see her face.” Her four-year-old daughter Aisha had not been hurt by the bombing but died from exposure in the cold night while the rescuers tried to save Azza. In the first half of 2005, another daughter was born, named Nawwar.

He eventually became one of Egyptian Islamic Jihad’s leading organizers and recruiters. Zawahiri’s hope was to recruit military officers and accumulate weapons, waiting for the right moment to launch “a complete overthrow of the existing order.” Chief strategist of Al-Jihad was Aboud al-Zumar, a colonel in the military intelligence whose plan was to kill the main leaders of the country, capture the headquarters of the army and State Security, the telephone exchange building, and of course the radio and television building, where news of the Islamic revolution would then be broadcast, unleashing – he expected – a popular uprising against secular authority all over the country.”

The plan was derailed when authorities were alerted to Al-Jihad’s plan by the arrest of an operative carrying crucial information, in February 1981. President Anwar Sadat ordered the roundup of more than 1500 people, including many Al-Jihad members, but missed a cell in the military led by Lieutenant Khalid Islambouli, who succeeded in assassinating Sadat during a military parade that October.

Al-Zawahiri was one of hundreds arrested following Sadat’s assassination. Al-Zawahiri’s lawyer, Montasser el-Zayat, contends that Zawahiri was tortured in prison.

In his book, Al-Zawahiri as I Knew Him, Al-Zayyat maintains that under torture of the Egyptian police, following his arrest in connection with the murder of Sadat in 1981, Al-Zawahiri revealed the hiding place of Essam al-Qamari, a key member of the Maadi cell of al-Jihad, which led to Al-Qamari’s “arrest and eventual execution.”

Al-Zawahiri was convicted of dealing in weapons and received a three-year sentence, which he completed in 1984 shortly after his conviction. In 1985, al-Zawahiri went to Saudi Arabia on Hajj and stayed to practice medicine in Jeddah for a year.

He then traveled to Peshawar, Pakistan where he worked in a Red Crescent hospital treating wounded refugees. There he became friends with the Canadian Ahmed Khadr, and the two shared a number of conversations about the need for Islamic government and the needs of the Afghan people. During this time, al-Zawahiri also began reconstituting the Egyptian Islamic Jihad (EIJ) along with other exiled militants. The group had “very loose ties to their nominal imprisoned leader, Abud al-Zumur.”

In Peshwar, al-Zawahiri is thought to have become radicalized by other Al-Jihad members, abandoning his old strategy of a swift coup d’etat to change society from above, and embracing the idea of takfir. In 1991, EIJ broke with al-Zumur, and al-Zawahiri grabbed “the reins of power” to become EIJ leader.

In Peshawar, he met Osama bin Laden, who was running a base for mujahideen called Maktab al-Khadamat (MAK); founded by the Palestinian Sheikh Abdullah Yusuf Azzam. The radical position of al-Zawahiri and the other militants of Al-Jihad put them at odds with Sheikh Azzam, with whom they competed for bin Laden’s financial resources. Zawahiri carried two false passports, a Swiss one in the name of Amin Uthman and a Dutch one in the name of Mohmud Hifnawi.

On February 23, 1998, he issued a joint fatwa with Osama bin Laden under the title “World Islamic Front Against Jews and Crusaders”. Zawahiri, not bin Laden, is thought to have been the actual author of the fatwa.

Following the 2000 USS Cole bombing, Mohammed Atef was moved to Kandahar, Zawahiri to Kabul, and Bin Laden fled to Kabul, later joining Atef when he realised no American reprisal attacks were forthcoming.

Hamid Mir is reported to have said that he believed that Ayman al-Zawahiri was the operational head of al-Qaeda, and that “ he is the person who can do the things that happened on Sept. 11.” Within days of the attacks, Zawahiri’s name was put forward as Bin Laden’s second-in-command, with reports suggesting he represented “a more formidable US foe than bin Laden.”.

On October 10, 2001, al-Zawahiri appeared on the initial list of the U.S. Federal Bureau of Investigation’s top 22 Most Wanted Terrorists, which was released to the public by U.S. President George W. Bush. In early November 2001, the Taliban government announced they were bestowing official Afghan citizenship on him, as well as Bin Laden, Mohammed Atef, Saif al-Adl, and Shaykh Asim Abdulrahman.

Following the U.S. invasion of Afghanistan, al-Zawahiri’s whereabouts are unknown, but he is generally thought to be in tribal Pakistan. Although he releases videos of himself frequently, al-Zawahiri has not appeared alongside bin Laden in any of them since 2003. In 2003, it was rumored that he was under arrest by Iran, although no later confirmation appeared.

On January 13, 2006, the Central Intelligence Agency launched an airstrike on Damadola, a Pakistani village near the Afghan border, where they believed al-Zawahiri was located. The airstrike was supposed to have killed al-Zawahiri and was thus reported in international news the following days. On January 30, a new video was released showing al-Zawahiri unhurt. The video did discuss the airstrike, but did not reveal if al-Zawahiri was present in the village at that time. Al-Zawahiri supplied direction for the Lal Masjid siege in July 2007. Pakistani Army troops taking control of the Red Mosque in Islamabad found letters from al-Zawahiri directing Islamic militants Abdul Rashid Ghazi and Abdul Aziz Ghazi, who ran the mosque and adjacent madrasah. This conflict resulted in 100 deaths.

On August 1, 2008, CBS News reported that it had obtained a copy of an intercepted letter dated July 29, 2008, from unnamed sources in Pakistan, which urgently requested a doctor to treat al-Zawahiri. The letter indicated that al-Zawahiri was critically injured in a US missile strike at Azam Warsak village in South Waziristan on July 28 that also reportedly killed al Qaeda explosives expert Abu Khabab al-Masri. Taliban Mehsud spokesman Maulvi Umar told the Associated Press on August 2, 2008, that the report of al-Zawahiri’s injury was false.

In early September 2008, Pakistan military claimed that they “almost” captured al-Zawahiri after getting information that he and his wife were in the Mohmand Agency, in northwest Pakistan. After raiding the area, officials didn’t find him.