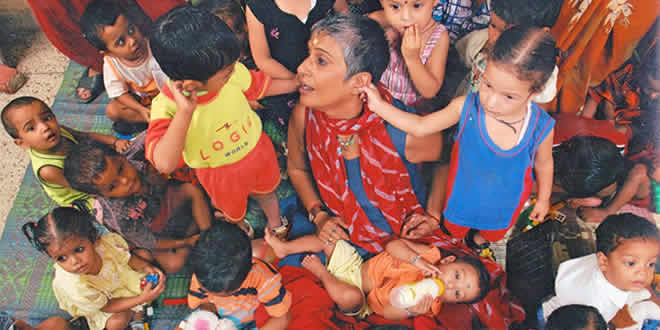 Anuradha Bakshi, a diplomat’s daughter, has grown up studying abroad. But when it came to choosing her vocation, she decided to work for the people on the other side of the fence. No institutional and impersonal funding for her – she decided to take that extra step, walk that additional mile to help those who need it most. Through her project, she is trying to educate children who would otherwise be part of uneducated millions. Her mantra remains to bring ‘kind hearts’ close to these children. People who can see with their hearts and make the lives of these children better. Success has come in various ways… the good work goes on.

Anuradha Bakshi’s face creases with concern as she looks up at the grey skies over Delhi. “The rains are coming. We need to repair the classroom” she says. “It’s the only way we can save children from falling prey to gangs who use them to steal from railway coaches or peddle drugs. It’s the only way we can guide them back to school”.

The “classroom” is actually a garbage dump amidst a clutch of factories by the railway track near Okhla Phase I. Sophiya and Pushpa ‘a tribal and a Dalit’ have run the Okhla primary extension programme for nearly a year.

They cleared it’ set up a shack’ negotiated with the cops and local politicians’ handled the local goons’ herded together the children and now teach over 100 of them here. Every Monday morning’ the teachers inevitably find the classroom destroyed but they rebuild it and carry on.

The Okhla programme is one of the more recent of ProjectWHY’s efforts. It’s changed the life of the founder and guiding spirit Anuradha Bakshi. “ProjectWHY believes in empowering people to take their lives in their own hands’” she says’ cuddling Utpal in her lap at the Giri Nagar school a two-bedroom shanty. This was the first school that was set up. Now Anuradha and her volunteers run three schools in all’ each operating in two shifts. Children up to class twelve are taught here. Even computers courses are made available.

Anuradha Bakshi’s younger daughter Shamika recalls how the project was conceived five years ago. “My mother came across Manu one day. He was living on the street ‘dirty soiled and neglected’” she says of a mentally challenged 30-year-old. “People in the neighborhood fed him but almost like he was an animal. Children threw stones at him. Ma hired a place to take care of him. Soon others started bringing their disabled kids.”

Shamika’ 24’ preferred to give up formal schooling and even a normal teenage life to join her mother. “We began with 50 children and a few volunteers’ teaching them spoken English. As time went by’ other challenges arose and the answer to each new challenge was a new activity. The number of children increased’ their demands multiplied’ new teachers were discovered within the tiny jhuggis and lanes’ ad hoc classrooms had to be found. Parks were cleaned’ tents put up’ unused pavements cleared’ any place would do’ but no child was ever sent away’” she says pointing out that there are now a total of 500 students in the three schools’including some with special needs’and 35 teachers drawn from within the community.

Not surprisingly’ ProjectWHY prefers no institutional or government aid. It depends entirely on individuals and donations from supporters. It launched a funding initiative called Just one rupee a day (JORAD) which aims at creating a wide donor base where everyone is asked to commit Rs. 1 a day or Rs 360 a year. “A rupee a day is a sum that the poorest in India can contribute and feel included” says Anuradha Bakshi. “Projectwhy dreams of taking primary education to local communities and have them fund the initiatives themselves’” she adds.

The programme has also extended its support to children in need of medical assistance. Take the case of 14-year-old Arun who needed surgery to correct a congenital heart defect. For nine years Arun waited patiently watching his peers go to school or play while the money collected for his surgery was diverted to pay for funeral rites and other social obligations. Finally’ this year his surgery was undertaken with the intervention of ProjectWHY. He now joins Raju as the second beneficiary of the programme to get a congenital heart defect corrected.