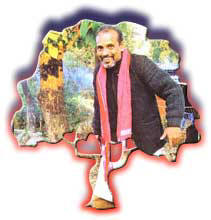 (The path is long, brother
The destination far
We’ll walk together
Together for sure
We are a new breed
We are brave
There’s nothing to fear
When we are together)

When the mountains echo with the song, the villagers of Nagrasu near Rudraprayag in Uttaranchal stir into action. The voice and words are familiar and someone shouts, ‘Sir aa gayen hain (Sir has come.)’ They form a ring around the singer, a middle aged man in trousers, khadi kurta, red towel and a pair of sneakers. One by one, they touch his feet to seek blessings before starting another day of “participatory research” . The faith in him is such that it can move mountains.

Dr Anil Joshi has moved mountains, indeed-he changed the lives of people in 150 villages in the Himalayan region. By involving villagers in his Himalayan Environmental Studies and Conservation Organization (HESCO), he helps them focus on their economic and development needs and encourages them to tap local resources that open up new avenues to self-reliance.

Joshi learnt the lessons of community work very early in his vocation. As a 23-year-old bitten by the green bug, the botany teacher at the Government College of Kotdwara went to Ghar village to educate the people about environment. He was all but hooted out of the village. Not one to give up, he went to nearby Galota and made polite conversation with a group of women. They snubbed him.

What could he teach them which they, who lived in the forests, did not know? When he said he was a social worker, a woman asked him why he did not think of roads or schools.

In the next village, people were softer, and shared with him a problem. They needed the permission of the district magistrate to fell a bamboo forest to build a school. That was the first lesson Joshi learnt: real needs were different from felt needs.

But he had obviously broken the ice. Some of those villagers got back to him a couple of months later: could he take up their case with someone in the government to get water taps? Joshi solved the problem with the help of a friend, an assistant engineer in Jal Sansthan. The first seeds of faith in Joshi were sown. The relationship has society.” grown over 25 years.

I was born in a forest, I loved the trees and the entire atmosphere. My subject was botany and most of my papers were on forests. I wanted to do something more than research,” says Joshi. “Something that will help society.”

He started alone, but later involved his colleagues and students. His first mission was to prevent landslides between Kotdwara, and Dagota in Pauri district using a local species of grass. “I thought we should have a platform and HESCO was formed in 1980-81,” says Joshi. “It was registered in 1983.”

HESCO believes in developing technologies to benefit common people. Participatory research is the slogan on which its volunteers work. While villages are self-sufficient and people have the time – tested skills to meet their requirements, these need constant scientific upgradation. The whole mountainous area is Joshi’s lab and the people of the hills are his researchers. Together, they execute a lab – to – land programme. 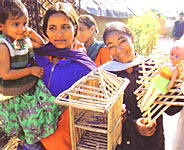 One thrust area is biomass utilisation. The Himalayan mountains are densely covered with plants and trees that people don’t use or whose use they have forgotten. The area was overrun with kurri, a wild shrub with deep green leaves, tiny red and yellow flowers and a mild aroma. Joshi, the botanist, placed it as Lantana camara, a weed.

Joshi thought of controlling the weed by using it. “Bamboo was one of the worst weeds more than two centuries ago,” he says. “When people began using it, it disappeared. So we decided to find ways of using lantana.”

HESCO found more than one use for the weed. Its sticks are strong enough to make huts and furniture, the leaves provide fodder for goats, and the flowers and leaves go into incense sticks and scented candles. HESCO trains youth and women to manufacture items from lantana and helps them market the products. Now there are many weaving fortunes out of the weed.

Impressed by the various development programmes for women, the Union department of science and technology has set up one of India’s four Women Technology Parks under HESCO at village Mehuwala near Dehradun. Says Dr Kiran Rawat, coordinator of the park: “There are at least 35 species of fibre-yielding plants in the mountains. We taught the women to use the fibre to make things that are generally made of coir.” It also offers a two-week training to make pickles, chutneys, jams and squashes using local fruits and vegetables.

Many who have undergone training have set up their own food processing units. For those who cannot afford to set up one, HESCO has a central food processing unit at Vigyanprasth, its nerve centre in Gwar-Chauki, a half-hour drive from Rudraprayag – the confluence of the Mandakini and the Alaknanda. 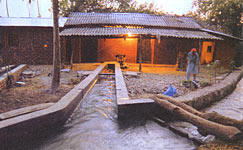 This is also where science and tradition meet. All training programmes and technology upgradations are tested at Vigyanprasth facilities. But constant research and review are done right in villagers’ homes. The resource that Joshi expects to revolutionise life – not just in the mountains but in the entire country – is the gharat or the traditional watermills used to grind grain. Says Joshi: “With technological upgradation, they can add 2,500 MW to the national power grid at no cost and each powergenerating gharat can provide employment to four persons each in five lakh families. “

The gharat is the centre of a water resource movement Joshi and his team members have launched. The padayatra a few years ago to focus attention on this had extensive participation: an 50 – year – old man walked from Gangotri to the Rashtrapati Bhawan!

HESCO has got village elders to identify medicinal plants and herbs, and now they are grown in nurseries in many homes. It has also identified 65 plants whose leaves, barks, flowers, fruit and root can yield dyes. Women are taught to use the dye and make marketable items like pouches, file covers and spectacle cases. All the women trained in the Women Technology Park later become members of Women’s Initiative for Self-Employment (WISE) network to promote and market their produce.

The Rudia community in Chamoli, at an altitude of 1,600 metres, used a locally available bamboo called ringal – Dendro calamus stricutus – to make kundas, a huge basket which they strapped on to their back to carry everything from manure to foodgrain.

They bartered kundas for grain, but often at a loss. Says Ramesh Dobhal, a HESCO team-member: “We realised they were spending a lot of time making kundas and getting no money. So we made them shift to making smaller items.

They started making fancy, affordable and useful articles that have takers everywhere. Now, pilgrims returning from Badrinath and Kedarnath carry prasad in small ringal puja baskets. And the chic ethnic basket in which some five – star hotels serve bread may well have been a ringal bush somewhere in the Himalayan heights.

Shripushkar Lal and Genulal, who are active in the Ringal Vikas Evam Kalyan Samiti, an association of basket-weavers that HESCO put together, earn at least Rs 100 a day. Those who cannot participate in this form of resource tapping are made to do it in a more elementary way. They develop seedlings that HESCO buys and distributes to growers elsewhere.

Deep down in the jungles, below an isolated part of Nagrasu, is a splendorous riot of colours. Nain Singh, 62, had no problem marketing the produce from his 1,800 fruit trees here, but HESCO gave him an idea and the know – how to grow flowers, mainly marigolds, and cultivate fish. Singh earns Rs 35 a kilo for the marigolds and Rs 80 a kilo for the fish. “Our idea was to demonstrate that fisheries should be taken up along with other activities,” says Joshi. “Wherever water is available in the mountains, fisheries should be encouraged.”

Joshi’s sensitivity to the needs of the mountain people goes far beyond their earnings. “As a child, I was pained by the drudgery of the people, particularly women. They had to walk long distances to bring water. And they had to leave home at an unearthly hour to go into the forests to ease themselves,” he remembers. Today many villages around Guar-Chauki have water harvesting tanks and Indian – style toilets with septic tanks for each house. HESCO has even devised a multipurpose kit named Kalyani, comprising a tiny screwdriver, cutter and copper tweezer instead of the crude gadgets women carried around to trim nails, clean their ears and remove thorns that hurt as they trudged through the forests.

The way to the women’s hearts was through children, whom Dr Sudha Sharma, a team member, approached gently, first personally and later by an interactive children’s bimonthly newspaper, Bachchon ka Akhbar. Half the contributions in the eight – pager dealing with sensitising children in resource awareness, environmental knowledge, health, socio – cultural issues and entrepreneurial skills are from children. “The idea is to help the children empower themselves. We post the paper to the children. If one of them has not received it, or if I have not responded to their queries or comments, I get a letter,” says Sudha. “The mailing list grows with every issue as children send addresses of their friends.”

Joshi, the youngest of five sisters and two brothers, was born in 1955 in Kotdwara, where his father was a contractor. His education graph is inspiring: third division in high school, second division in intermediate, first class for BSc. and merit scholarship for MSc. After Ph.D, he joined as lecturer at the Kotdwara Government College.

He doubled as a social worker for a few years. In 1993, he opted to resign to work full time in the mountains he loved. “It was a very difficult decision to take,” says Joshi. But the department of science and technology intervened, and said it would support him through his leave for five years. In 1997, Joshi decided to leave, much to the dismay of his parents. But his wife Sandhya did not discourage him. The couple has a son, 15-year-old Shivam.

Joshi drew inspiration from Mahatma Gandhi. “I learnt from Gandhiji that to work for the people, you have to be very simple,” says Joshi. “We don’t have a vehicle, it is because the people we work for don’t have one.”

Like his role model, he turns to prayer, a stress-buster, for peace. He even sounds like Gandhi when he talks about the bottom-up view of development: “If you want villagers to prosper, you have to go to the villages, and give them technology and better marketing skills so that they can tap the local market and replace the market that is flooded with things from outside. You’ve got to decentralise’ “

Joshi’s well-educated and motivated team also leads a spartan life. The highest salary is Rs 6,000 and the lowest, Rs 2,000. Some of them had left their jobs and were with him when they were students. No one has left the organisation. “HESCO is a mission. None of us cares if it ceases to work tomorrow,” he says. “The strength is now with the people!’

Joshi is an Ashoka Fellow, and last year, he won the Nehru Award and the Ram Washeshwar Devi Bhatia award. His colleague Kiran Rawat received a Rs 1 lakh award from the government. The cash component of these awards has been spent on the welfare of the villagers. But Joshi has no time to rejoice: as his theme song suggests, his path is long and his destination far.