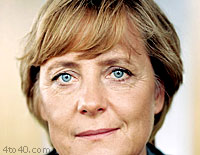 Angela Merkel was born Angela Dorothea Kasner in Hamburg on 17 July 1954, the daughter of Horst Kasner, a Lutheran pastor, and his wife, Herlind, a teacher of English and Latin. Her mother was once a member of the Social Democratic Party of Germany. She has a brother, Marcus and a sister, Irene.

Merkel was educated in Templin and at the University of Leipzig, where she studied physics from 1973 to 1978. Merkel worked and studied at the Central Institute for Physical Chemistry of the Academy of Sciences in Berlin-Adlershof from 1978 to 1990. She learned to speak Russian fluently, and earned a statewide prize for her proficiency. After being awarded a doctorate (Dr. rer. nat.) for her thesis on quantum chemistry she worked as a researcher.

In 1989, Merkel got involved in the growing democracy movement after the fall of the Berlin Wall, joining the new party Democratic Awakening. Following the first (and only) democratic election of the East German state, she became the deputy spokesperson of the new pre-unification caretaker government under Lothar de Maizière.

At the first post-reunification general election in December 1990, she was elected to the Bundestag from a constituency which includes the districts of Nordvorpommern and Rügen, as well as the city of Stralsund. This has remained her electoral district until today. Her party merged with the west German CDU and she became Minister for Women and Youth in Helmut Kohl’s 3rd cabinet. In 1994, she was made Minister for the Environment and Nuclear Safety, which gave her greater political visibility and a platform on which to build her political career.

She become the first female chair of her party, on 10 April 2000. Her election surprised many observers, as her personality offered a contrast to the party she had been chosen to lead. Merkel is a Protestant, originating from predominantly Protestant northern Germany, while the CDU is a male-dominated, socially conservative party with strongholds in western and southern Germany, and the Bavarian sister party, the CSU, has deep Catholic roots. In 2002, Merkel became leader of the conservative opposition in the lower house of the German parliament, the Bundestag.

Merkel supported a substantial reform agenda concerning Germany’s economic and social system and was considered to be more pro-market than her own party (the CDU). she advocated changes to German labour law, specifically removing barriers to laying off employees and increasing the allowed number of work hours in a week, arguing that existing laws made the country less competitive because companies cannot easily control labour costs at times when business is slow. Merkel argued for Germany’s nuclear power to be phased out less quickly than the Schröder administration had planned.

Merkel advocated a strong transatlantic partnership and German-American friendship. In the spring of 2003, defying strong public opposition, Merkel came out in favour of the U.S. invasion of Iraq, describing it as “unavoidable” and accusing Chancellor Gerhard Schröder of anti-Americanism. She criticised the government’s support for the accession of Turkey to the European Union and favoured a “privileged partnership” instead.

On 30 May 2005, Merkel won the CDU/CSU nomination as challenger to Chancellor Gerhard Schröder of the SPD in the 2005 national elections.On 22 November 2005, Merkel assumed the office of Chancellor of Germany following a stalemate election that resulted in a grand coalition with the SPD. She was re-elected in 2009 with a larger majority and was able to form a governing coalition with the FDP.

As a female politician from a centre right party, and a scientist, Merkel has been compared by many in the English-language press to former British Prime Minister Margaret Thatcher. Being the first female German chancellor and the youngest German chancellor since the Second World War, Merkel is also the first born after World War II, and the first with a background in natural sciences. She studied physics; her predecessors law, business, history or were military officers, among others. Merkel topped Forbes magazine’s list of “The World’s 100 Most Powerful Women” in 2006, 2007, 2008 and 2009. In 2010, Merkel was ranked by Forbes below American First Lady Michelle Obama, grocer Irene Rosenfeld and entertainer Oprah Winfrey. In 1977, Angela Kasner married physics student Ulrich Merkel. The marriage ended in divorce in 1982. Her second and current husband is quantum chemist and professor Joachim Sauer, who has largely remained out of the media spotlight. They first met in 1981, came together later, but married privately only on 30 December 1998. She has no children, but Sauer has two adult sons by a previous marriage.

Honor’s that Angela Merkel Possess – In 2006, Angela Merkel was awarded the Vision for Europe Award for her contribution toward greater European integration. In 2007 Merkel was awarded an honorary doctorate from the Hebrew University of Jerusalem. In March 2006, the italian Presidency of the Council of Ministers gives at the German Chancellor the recognition of Dama di Gran Croce Ordine al Merito della Repubblica Italiana. She received the Karlspreis (Charlemagne Prize) for 2008 for distinguished services to European unity. In January 2008, Merkel was awarded the Grand Cross of the Order of Merit of the Federal Republic of Germany. She was also awarded the honorary doctorate from Leipzig University in June 2008, University of Technology in Wroclaw (Poland) in September 2008 and Babes-Bolyai University from Cluj-Napoca, Romania on 12 October 2010 for her historical contribution to the European unification and for her global role in renewing international cooperation. New Statesman named Angela Merkel in ‘the World’s 50 Most Influential Figures’ 2010. On September 21, 2010, the Leo Baeck Institute, a research institution in New York City devoted to the history of German-speaking Jewry, awarded Angela Merkel the Leo Baeck Medal. The medal was presented by former US Secretary of the Treasury and current Director of the Jewish Museum Berlin, W. Michael Blumenthal, who cited Merkel’s support of Jewish cultural life and the integration of minorities in Germany. On 17 November 2010 the White House announced that President Barack Obama will award her the Medal of Freedom – the highest civilian honor in the USA. On 12 September 2010, she received the Leo Baeck Medal (Leo Baeck Institute) for her humanitarian work promoting tolerance and social justice. On 15 February 2011, she received the Presidential Medal of Freedom from U.S. President Barack Obama.