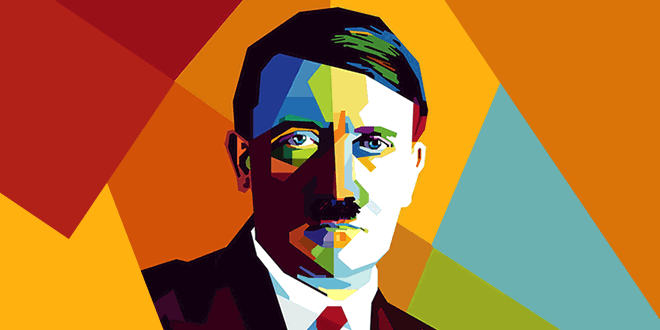 Not being a professional historian, I take on this essay with fear and trembling. That’s because, although defeated, although dead, this man is frightening. What was the secret of his power over his listeners? His demagogic appeal to immoderation, to excess, and to simplifying hate? They spoke of his intuitive powers and his “luck” (he escaped several attempts on his life).

Adolf Hitler or the incarnation of absolute evil; this is how future generations will remember the all-powerful Fuhrer of the criminal Third Reich. Compared with him, his peers Mussolini and Franco were novices. Under his hypnotic gaze, humanity crossed a threshold from which one could see the abyss.

At the same time that he terrorized his adversaries, he knew how to please, impress, and charm the very interlocutors from whom he wanted support. Diplomats and journalists insist as much on his charm as they do on his temper tantrums. The savior admired by his own as he dragged them into his madness, the Satan and exterminating angel feared and hated by all others, Hitler led his people to a shameful defeat without precedent. That his political and strategic ambitions have created a dividing line in the history of this turbulent and tormented century is undeniable: there is a before and an after. By the breadth of his crimes, which have attained a quasi -ontological dimension, he surpasses all his predecessors: as a result of Hitler, man is defined by what makes him inhuman. With Hitler at the head of a gigantic laboratory, life itself seems to have changed.

How did this Austrian without title or position manage to get himself elected head of a German nation renowned for its civilizing mission? How to explain the success of his cheap demagogy in the heart of a people so proud of having inherited the genius of a Wolfgang von Goethe and an Immanuel Kant?

Was there no resistance to his disastrous projects? There was. But it was too feeble, too weak, and too late to succeed. German society had rallied behind him: the judicial, the educational, the industrial, and the economic establishments gave him their support.

Few politicians of this century have aroused, in their lifetime, such love and so much hate; few have inspired so much historical and psychological research after their death. Even today, works on his enigmatic personality and his cursed career are bestsellers everywhere. Some are good, others are less good, but all seem to respond to an authentic curiosity on the part of a public haunted by memory and the desire to understand.

We think we know everything about the nefarious forces that shaped his destiny: his unhappy childhood, his frustrated adolescence; his artistic disappointments; his wound received on the front during World War I; his taste for spectacle, his constant disdain for social and military aristocracies; his relationship with Eva Braun, who adored him; the cult of the very death he feared; his lack of scruples with regard to his former comrades of the SA, whom he had assassinated in 1934; his endless hatred of Jews, whose survival enraged him-each and every phase of his official and private life has found its chroniclers, its biographers.

And yet. There are, in all these givens, elements that escape us. How did this unstable paranoid find it within himself to impose gigantic hope as an immutable ideal that motivated his nation almost until the end? Would he have come to power if Germany were not going through endless economic crises, or if the winners in 1918 had not imposed on it conditions that represented a national humiliation against which the German patriotic fiber could only revolt?

We would be wrong to forget: Adolf Hitler came to power in January 1933 by the most legitimate means. His National Socialist Party won a plurality in the parliamentary elections. The aging Field Marshal Paul von Hindenburg allowed him, at age forty-three, to form the new government, marking the end of the Weimar Republic. And the beginning of the Third Reich, which, according to Hitler, would last one thousand years.

From that moment on, events cascaded. The burning of the Reichstag came only a little before the openings of the first concentration camps, established for members of the opposition. Fear descended on the country and squeezed it in a vise. Great writers, musicians, and painters went into exile to France and the U.S. Jews with foresight emigrated toward Palestine. The air of Hitler’s Germany was becoming more and more suffocating. Those who preferred to wait, thinking that the Nazi regime would not last, could not last, would regret it later, when it was too late.

The fact is that Hitler was beloved by his people – not the military, at least not in the beginning, but by the average Germans who pledged to him an affection, a tenderness, and a fidelity that bordered on the irrational. It was idolatry on a national scale. One had to see the crowds who acclaimed him. And the women who were attracted to him. And the young who in his presence went into ecstasy. Did they not see the hateful mask that covered his face? Did they not divine the catastrophe he bore within himself?

Violating the Treaty of Versailles, which limited the German army to 100,000 men, Adolf Hitler embarked on a rearmament program of massive scale: fighter planes, tanks, submarines. His goal? It was enough to read Mein Kampf, written in prison after the abortive coup of 1923 in Munich, to divine its contours: to become, once again, a global superpower, capable and desirous of reconquering lost territory, and others as well.

And the free world let it happen.

His army entered the Rhineland in 1936. A tangible reaction from France and Britain would have led to his fall. But since nothing happened, Adolf Hitler played on the “cowardice” of democratic principles. That cowardice was confirmed by the shameful Munich Agreement, by which France and Britain betrayed their alliance with Czechoslovakia and abandoned it like a deadweight. At every turn, Hitler derided his generals and their lack of audacity. In 1939 he stupefied the entire world by reaching a nonaggression pact with Stalin. Though they had never met, the two dictators appeared to get along perfectly; it was said that a sort of empathy existed between them. Poland paid the price of this unnatural “friendship”; cut in two, it ceased to exist as a state.

Hitler also counted on Stalin’s naivete. In a sense he was right. According to all witnesses, Stalin had total confidence in Hitler. To humor Hitler’s extreme anti-Semitic sensibilities, the Soviet hierarchy withdrew certain Jews, such as Maxim Litvinov, the Soviet Foreign Minister, from the international scene. Stalin’s order to honor the commercial agreements between the two countries was scrupulously executed, at all levels, Until the beginning of hostilities: the day of German aggression, one still saw Soviet trains stuffed with raw materials heading toward German factories.

Was Adolf Hitler shrewder than Stalin? Certainly he was more tenacious than his French and British adversaries. Winston Churchill was the only man of state who unmasked Hitler immediately and refused to let himself be duped by Hitler’s repeated promises that this time he was making his “last territorial demand.”

And yet. In his own “logic,” Adolf Hitler was persuaded for a fairly long time that the German and British people had every reason to get along and divide up spheres of influence throughout the world. He did not understand British obstinacy in its resistance to his racial philosophy and to the practical ends it engendered.

In fact, he wanted to swallow up Russia, Poland, Ukraine, and the Baltic countries to augment lebensraum: Germany’s vital space. But then why did he launch his destructive war against London? Why did he declare war against the U.S.? Solely to please his Japanese ally? Why did he mandate a policy of cruelty in the Soviet territories occupied by his armies, when certain segments of the population there were ready to greet them with flowers? And finally, why did he invest so much energy in his hatred of Jews? Why did the night trains that took them to their death have priority over the military convoys that were taking badly needed troops to the front? His dark obsession with the “Jewish question” and its “Final Solution” will be long remembered, for it has evocative names that paralyze men’s hearts with terror: Auschwitz, Treblinka, and BeIzee.

After Rommel’s defeat in North Africa, after the debacle at Stalingrad, and even when the landings in Normandy were imminent, Adolf Hitler and his entourage still had the mind to come up with the Final Solution. In his testament, drafted in an underground bunker just hours before his suicide in Berlin, Hitler returns again to this hatred of the Jewish people that had never left him.

But in the same testament, he settles his score with the German people. He wants them to be sacked, destroyed, reduced to misery and shame for having failed him by denying him his glory. The former corporal become commander-in-chief of all his armies and convinced of his strategic and political genius was not prepared to recognize his own responsibility for the defeat of his Reich.

His kingdom collapsed after twelve years in a war that remains the most atrocious, the most brutal, and the deadliest in history. But which, by the same token, allowed several large figures to emerge. Their names have become legendary: Eisenhower, De Gaulle, Montgomery, Zhukov, Patton …

But when later we evoke the twentieth century, among the first names that will surge to mind will be that of a fanatic with a mustache who thought to reign by selling the soul of his people to the thousand demons of hate and of death.