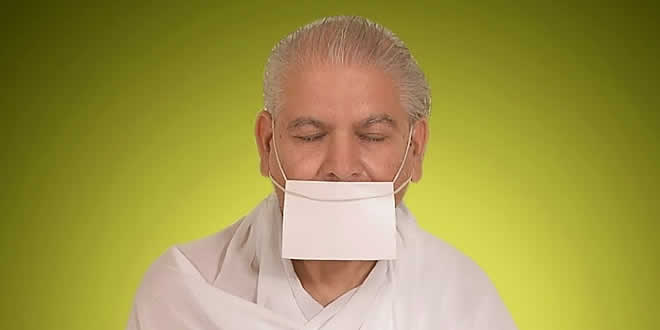 Acharya Shiv Muni Ji Maharaj — Acharya Samrat Dr. Shiv Muni Ji Maharaja being now heads and leads the Jain shraman sangh. Detachment, austerity, enlightenment and meditation are the four pillars of his pious life lived in equanimity. His mind is ever in quest of knowledge and engrossed in meditation. There are numerous responsibilities of the shraman sangh which he as being at the helm of affairs in the hierarchy carries out in a quiet, natural and proficient manner, but along side this he is ever on the move upward on the path to spiritual progression. 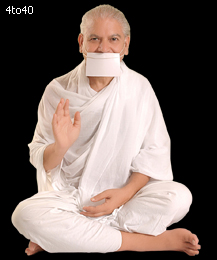 Shiv Muni was born in a very affluent and respectable Oswal family of a small town called Malout in the Malwa region of the Punjab. By the time he entered the university for higher education, he came to be known for his sharp intellect and his power of comprehension. He passed each of his examination, from the primary to the university, in the first division.

He had nurtured an intense desire to know and realize truth ever since his childhood. His education in the colleges and the university could not satiate his hunger for truth, rather the acquisition of higher academic knowledge further intensified his desire for higher spiritual knowledge. During his student life he travelled far and wide throughout America, Canada, England and several other countries. The wealth and material comforts of worldly life failed to tempt and bind him. Then he turned towards studying the faith of his family, the Jainism. He made a thorough study of the life, utterances and teachings of Lord Mahavira. This stirred his inner self and he made a firm resolve to renounce this worldly life and take to the life of an ascetic.

Of course, there were many emotional pressures from the family and friends, but nothing could deviate him from his resolve. And, as it happens in the case of all great men, his resolve was not uncalled for. It was this resolve which was in future to give to the Shraman Sangh a dynamic and enlighted spiritual leader. He entered the shraman sangh as a disciple of Gian Muni Ji, well known Jain scholar and exegete and himself a disciple of Acharya Atma Ram Ji.

Shiv Muni Ji made an intensive study of Jain philosophy and theology. He got his doctorate from the Punjabi University, Patiala, on the topic of “Doctrine of Liberation in Indian Religions, with special reference to Jainism”. A study of this dissertation, since available in book form, would reveal to any reader the author?s depth of understanding as well as his insatiable thirst for more and more knowledge.

After a few years of his initiation into the sraman sangh, Shiv Muni Ji planned, as per the directives of his Guru, to travel throughout India preaching Jain tenets. Shiv Muni sojourned through the interiors of Punjab, Haryana, Delhi, Uttar Pradesh, Rajasthan, Madhya Pradesh, Maharashtra, Andhra Pradesh, Karnataka, Odisha, Tamil Nadu, Gujarat and other states. Wherever he visited, people welcomed him and liked his personal piety and simplicity of life. It was during this sojourn that the shraman sangh selected him as its first Yuva Acharya.

One could see him apparently travelling from village to village in different parts of the country, but in reality he was constantly on the upward move of his spiritual journey. Through the medium of meditation, he went deeper and deeper. During the course of this inward sojourn, he had had wonderful experiences of truth and meditation. He seems to have proved that even in this era one could know the truth, realize the truth and live the truth.

Presently, Shiv Muni Ji has been busy preaching and spreading the higher knowledge through meditation: it is through this medium that he has himself lived the truth. Thousands of people have benefited from this endeavor of the Acharya. Demands have constantly been pouring in from all over the country for holding meditation camps.

The Jain world considers itself fortunate to have as its spiritual leader a person who is so enlightened, so austere and simple and so given to meditation.

Previous What is Maha Shivaratri Festival?
Next Lord Shiva: Most Popular Hindu God