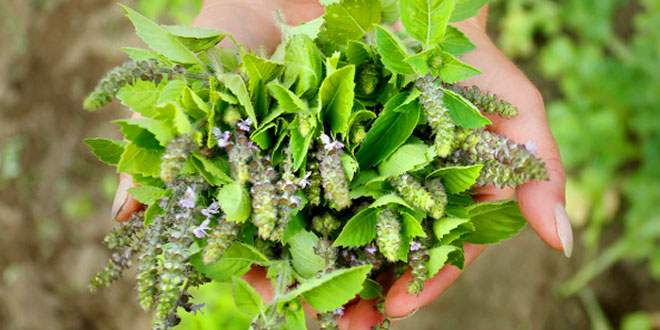 Tulsi Has Environmental Benefits Too — Ayurvedic medicinal values of Tulsi are well known. Our ancient scriptures have enumerated the medicinal benefits of tulsi. Its extracts are used widely for curing common ailments like common cold, headache, stomach disorder etc.

“Tulsi gives out oxygen for 20 hours and ozone for four hours a day along with the formation of nascent oxygen which absorbs harmful gases like carbon monoxide, carbon dioxide and Sulphur dioxide from the environment,” said Shyamkant Padoley, an eminent botanist.

Padoley, member of technical committee, ministry of environment and forest, New Delhi, and forest tech committee, also read a paper at the International Conference on Occupational Respiratory Diseases at Kyoto in 1997 where cyclo oxygenate, an enzyme only found in tulsi was labelled for the first time. This enzyme regulates the entire mechanism of oxygen evolution.

Dada Dham initiated a campaign ‘Tulsi Lagao Pradushan Hatao’ in 1987 under the guidance of Narendra Dada, the institution’s head. It was under this campaign that the above mentioned panel of experts was formed. After finding out the environmental benefits of the plant, Dada Dham organized a number of programmes like street plays, nukkad sabhas and lectures to propagate the use of the plant.

“That is why we want to urge scientists and concerned authorities to make research on the issue of increasing the height of tulsi plant. If big trees can be converted to bonsai plants then big tulsi trees can be possible too,” said Kishor Verma, PRO of Dada Dham.

He also citied the research and work by other organization in support of tulsi’s environmental benefits.

“The forest department of Uttar Pradesh, with the help of an organization called Organic India Limited, Lucknow planted lakhs of tulsi saplings around Taj Mahal to protect its surface from industrial emissions. This step has yielded positive results,” Verma said.

“We are just asking the administration to take notice of these extra ordinary benefits of tulsi and take steps for utilizing them. Even simple steps like planting tulsi plants on road dividers, parks etc can bring a difference,” said Verma.

Previous Who is an environmental refugee?
Next लकड़बग्घा: पर्यावरण का रक्षक