Habitat: Tropical and sub-tropical India and Nepal at an altitude of about 1,050 m. 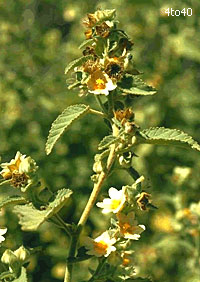 Sida Cordifolia, an erect, minutely hairy and branched under shrub with a firm woody stem and intricate branches, contains 0.8% to 1.2% of the alkaloid ephedrine. It has been used by Ayurveda as a rejuvenating herb and an aphrodisiac.

Sida cordifolia has ephedrine and pseudo-ephedrine along with other compounds as active ingredients that stimulate the cardio-vascular system and CNS. It is considered to have diaphoretic, diuretic, central nervous system stimulating and anti-asthmatic properties. The stem of Sida cordifolia contains a number of active compounds, including small amounts of an essential oil, 1-2% alkaloids composed mainly of ephedrine and pseudoephedrine, with ephedrine ranging from 30-90%, depending on the source. It is a rejuvenating herb, an aphrodisiac herb which helps in curing those diseases that occur due to inflammation of the nerves.

Sida Cordifolia has been used in India for over 2,000 years now to treat a variety of health disorders like bronchial asthma, cold & flu, chills, lack of perspiration, headache, nasal congestion, aching joints and bones, cough & wheezing, and edema. One of its uses is in weight loss too as the ephedrine alkaloids control metabolism in human body.

Sida cordifolia when used excessively can cause ephedrine related side effects like insomnia, anxiety, nervousness, increase in blood pressure, memory loss or even stroke. Ephedrine coupled with caffeine can prove fatal. Patients subjected to IOC drug testing, using MAO inhibitor medication (Anti-depressants), having high blood pressure, heart disease, thyroid or prostrate condition along with pregnant or lactating women should not take this herb except under expert guidance.