Uses: It is Tonic, Diuretic, Demulcent, Disphoretic and Blood purifier. Employed in Nutritional disorders, syphilis, chronic rheumatism, gravel and other urinary diseases and skin afections. It is also employed as a vehicle for Pottasium Iodine. 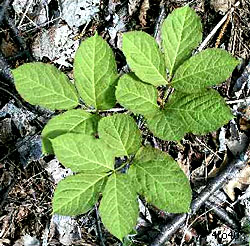 Indian Sarsaparilla (Hemidesmus indicus) is a species of plant that is found in South Asia. It is a slender, laticiferous, twining, sometimes prostrate or semi-erect shrub. Roots are woody and aromatic. The stem is numerous, slender, terete, thickened at the nodes. The leaves are opposite, short-petioled, very variable, elliptic-oblong to linear-lanceolate. The flowers are greenish outside, purplish inside, crowded in sub-sessile axillary cymes.

It is used to make beverages and also used in traditional medicine. In Ayurveda it goes by the name of ananthamoola or Anantmula. It is also called the False Sarsaparilla. The plant enjoys a status as tonic, alterative, demulcent, diaphoretic, diuretic and blood purifier. It is employed in nutritional disorders, syphilis, chronic rheumatism, gravel and other urinary diseases and skin affections. It is administered in the form of powder, infusion or decoction as syrup. It is also a component of several medicinal preparations.

It is one of the Rasayana plants of Ayurveda, as it is anabolic in its effect. It stimulates the flow of bile and removes toxins from the body. It is a good diuretic and increases flow of urine three to four times. When used with Tinospora, the herb’s effect is enhanced further. It relieves inflammation of urethra and burning micturition and is also helpful for third or fourth stages of syphilis. It is sometimes confused with other Ayurvedic herb called white sariva.

Chemical analysis of the root showed the presence of coumarins, volatile oil the chief component of which is p-methoxy salicylic aldehyde, two sterols and a pregnane glycoside.